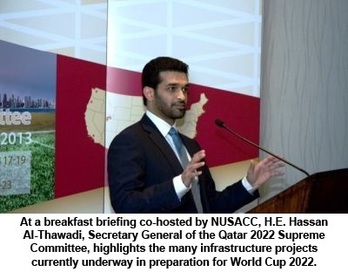 In Los Angeles this week, the National U.S.-Arab Chamber of Commerce (NUSACC) co-hosted a breakfast in honor of a high-level Qatari delegation that is in the United States to build commercial relationships around the FIFA 2022 World Cup, which will be hosted by the State of Qatar. The event, which attracted 150 business leaders from Los Angeles and across the United States, featured presentations by H.E. Hassan Al-Thawadi, Secretary General of the Qatar 2022 Supreme Committee, and Hon. Susan Ziadeh, U.S. Ambassador to Qatar. The breakfast kicked off a week-long road show that will also include visits to Portland, Oregon and Seattle, Washington. ​

​"We commend the Qatari delegation for launching this road show in Los Angeles, a focal point for innovation and entrepreneurial activity in the United States," said David Hamod, President & CEO of the National U.S.Arab Chamber of Commerce, in his welcoming remarks to the delegates. "This week's tour offers an extraordinary opportunity for U.S. companies to express their interest in the FIFA 2022 World Cup, which will be a showcase for Qatar and the entire Middle East and North Africa (MENA) region." Hamod complimented the leadership of Qatar for its "supersized" vision and its desire to engage U.S. expertise in the run-up to 2022. Secretary General Al-Thawadi, in his remarks, drew parallels between America's pioneering spirit and Qatar's desire to host the 2022 World Cup. "The United States understands our journey," he noted. "This is a hub that nurtures entrepreneurial spirit and develops creative abilities," providing opportunities for a "street vender to become a multi-million dollar company. For that reason, the U.S. understands our spirit to host the 2022 World Cup." (Qatar, considered an underdog to host the World Cup, pulled off an unexpected victory.) "The American spirit is a guiding spirit," he concluded, "and we'd like to bring that to Qatar. 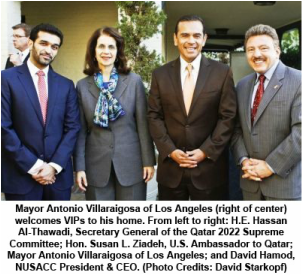 The Secretary General suggested that hosting the 2022 World Cup will "change perceptions of the Middle East." As such, he said, this was "not only a Qatar bid, but a MENA bid, an Arab bid," one that will serve as a platform to highlight opportunities throughout the region, with Qatar as its hub. Alluding to the population of the Arab world, the Secretary General noted, "There are 300 million opportunities for companies to use Qatar as a base." "This is the building of a nation," he suggested, and "we hope that the world will receive us with open minds and open hearts."


Al-Thawadi said that Qatar is investing $60 - $100 billion in infrastructure projects -- some of which were conceived before Qatar won the 2022 bid -- including projects revolving around roads, railways, ports, water and wastewater facilities, ICT infrastructure, and the new Hamad International Airport, which held a "soft opening" earlier this week in preparation for its grand opening on April 1. Some of the projects that are specific to the 2022 World Cup include a dozen stadiums, the FIFA headquarters, Fan Zones, a media center, base camps for teams, training sites, and leisure & entertainment hubs. "We will deliver the 'wow' factor," noted Al-Thawadi. 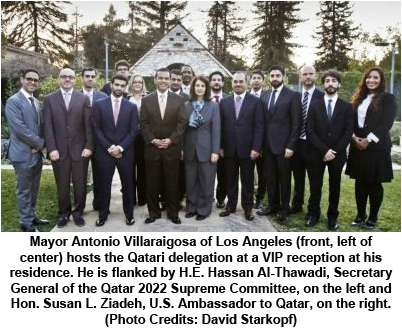 U.S. Ambassador Susan Ziadeh, who is co-leading the delegation with Secretary General Al-Thawadi, said she appreciated the warm welcome that the delegates have received in California, the first stop on the road show. "Creativity and innovation, expertise in entertainment and sports . . . all of these come together in Los Angeles," she noted.

She suggested that Qatar has "taken the lead in establishing itself as the destination for sports and entertainment," consistent with that nation's 2030 National Vision strategy. For U.S. companies interested in doing business in Doha, she imparted some important advice: Look at this as a partnership opportunity, one that requires building a relationship of trust and confidence. She encouraged American companies to "get on the ground," and she advised them to "bring your A Team, your best talent," because Qatar is "looking to raise performance."

"Be prepared to take your game to the next level," she concluded, and get ready to "strut your stuff." 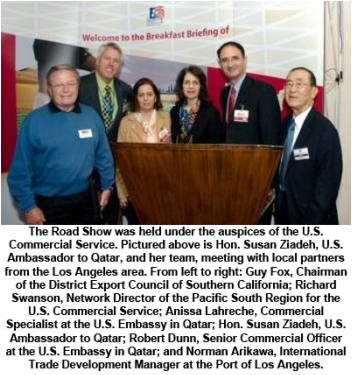 Hon. Antonio Ramon Villaraigosa, Mayor of Los Angeles, extended a warm welcome to the delegation by hosting a VIP reception at his home. In his remarks, the mayor highlighted the diversity of Los Angeles, America's second largest city by population, and the key role that Los Angeles could play in support of the 2022 World Cup in Doha. "As you seek partners for the 2022 World Cup, you will find an abundance of opportunities here," he said. "From event planning to construction engineers, our talent pool is very deep, and Los Angeles has a proud history of hosting major international sporting events."

Mayor Villaraigosa concluded, "The world meets in Los Angeles. We are a destination for travelers, adventurers and sojourners from the four corners of the earth. We are a hub for innovation and investment in the global economy. And we stand ready, willing, and able to assist you in any way that we can."

According to the U.S. Commercial Service and Ernst & Young, major infrastructure projects in Qatar include Hamad International Airport, The Pearl Qatar, Education City, the Qatar-Bahrain Causeway, New Doha Port, the Qatar Railway Project, Lusail City, the Msheireb development, a new network of roads, World Cup stadiums, and tourism. In preparation to receive large numbers of tourists from around the world, Qatar will require more than 90,000 hotel rooms to be ready by 2022, representing substantial growth in this sector. 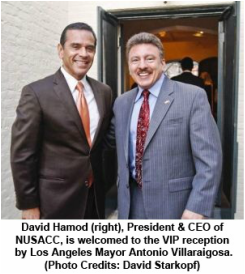 According to research conducted by the National U.S.-Arab Chamber of Commerce (NUSACC), U.S. merchandise exports to the State of Qatar are on track to reach $5.99 billion by the year 2015, increasing U.S. market share in Qatar from 12.2 percent in 2011 to 19.3 percent in 2015. U.S. services are also slated to increase to $2.64 billion, expanding America's market share from 20 percent to 23 percent. Sales of goods and services to Qatar are roughly doubling every four years and are on track to grow to a total of $8.64 billion by 2015. In 2012, California sold $683 million worth of goods to Qatar, California's third largest market in the Arab world. Within the United States, California is ranked second among states that are exporting to Qatar.

Against this backdrop, Los Angeles was a logical choice as a first stop for the Qatar 2022 World Cup delegation, whose visit was organized under the auspices of the U.S. Commercial Service. Numerous local partners worked together to make the visit a success, including the Office of the Mayor, the Port of Los Angeles, the Los Angeles Regional Export Council, Los Angeles World Airports, the District Export Council of Southern California, and the Los Angeles Chamber of Commerce.

"Not only does Southern California offer renowned sporting arenas such as the Rose Bowl, Home Depot Center, and LA Live Staples Center, but we also have tech giants, investment specialists, and world-class media and entertainment," concluded Jessica Gray, Associate Director in charge of the U.S.-Arab Chamber's Los Angeles office. "This region boasts a concentration of top tier construction, engineering, and design firms, academic and research institutions, the largest customs district in the United States (Los Angeles), and an entrepreneurial spirit that inspires global business opportunities. As such, Los Angeles was the perfect location for the Qatar 2022 delegation to kick off its trade mission."
HOME | Privacy Policy | My Dashboard | About | Contact | Sitemap
Copyright © 2022, National U.S.-Arab Chamber of Commerce. All Rights Reserved