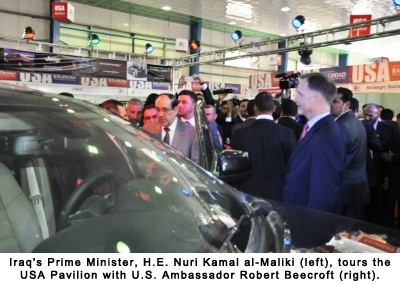 The 39th Baghdad International Trade Fair, which opened today and runs until November 10, is experiencing high-level American participation, a testament to U.S. companies' growing interest in the Republic of Iraq. The National U.S.-Arab Chamber of Commerce (NUSACC) is serving as a Silver Sponsor of the USA Pavilion at the Fair, marking NUSACC's second straight year as a leading sponsor of America's pavilion.

David Hamod, President & CEO of the National U.S.-Arab Chamber of Commerce, noted, "Our Chamber is privileged to support the USA Pavilion and the important work that the U.S. Embassy is doing in Iraq to promote U.S.-Iraq commercial relations. The American business presence in Iraq is moving from strength to strength, and NUSACC is proud to be a partner in that endeavor."

The importance of U.S.-Iraq economic partnership was highlighted by Hon. Robert Stephen Beecroft, the U.S. Ambassador in Baghdad, in his opening remarks at the U.S. Pavilion today. He said, "The goods and services provided by U.S. suppliers are helping Iraq to rebuild its infrastructure and industrial capacity. They are helping to create new jobs and greater prosperity for the Iraqi people. American companies are bringing world-class technology, management systems, business practices, and models of corporate social responsibility to Iraq. I am proud of the contributions they have made, and will continue to make, to the economic development of Iraq."

Ambassador Beecroft went on to say that the "diversity of the U.S.-Iraq commercial relationship shows that we are dealing with far more than just oil. We have a wide variety of exhibitors here today. Here in the U.S. Pavilion, you won't have to look far to see fine examples of American automobile manufacturing, and you'll also find U.S. companies working together with the Iraqi government and private sector in a variety of other industry areas: power generation, information technology, transportation, safety & security, financial services, and defense."

According to research conducted by the National U.S.-Arab Chamber of Commerce, Iraq is forecasted to become the fourth largest destination in the Arab world for U.S. goods and services by the end of next year and is on track to move up to the #3 position by the end of 2015. That nation boasted a 48.1 percent increase in imports from the United States from 2010 to 2011, and with Gross Domestic Product growth of 14.7 percent slated for the year 2013, there is good reason to believe that Iraq can maintain these levels of growth for the foreseeable future.
​
In 2011, top import sectors from the United States included non-electrical machinery ($643.1 million), agricultural products ($531.2 million), transportation equipment ($393.7 million), and computer & electronic products ($301.3 million). Top exporting states included Texas ($701 million), Washington ($152 million), South Carolina ($151 million), New York ($142 million), and Alabama ($122 million). 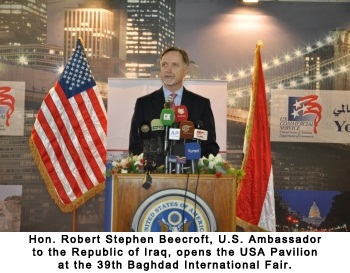 ​First organized in 1964 with participation from only five Arab countries, the Baghdad International Trade Fair now features products and services from all around the world. In 2011, the first time in over twenty years in which the United States participated in the Fair, NUSACC helped to open the USA Pavilion. This year, 35 American public and private companies, organizations, and universities are exhibiting at the USA Pavilion, showcasing such sectors as aviation & aeronautics, banking & financial services, construction & engineering, defense & security, education, information & communications technologies (ICT), healthcare, infrastructure, logistics, and transportation.

The National U.S.-Arab Chamber of Commerce works very closely with the U.S. Government in promoting America's business interests throughout the Arab world, including the Republic of Iraq. Christian Reed, Commercial Counselor at the U.S. Embassy in Baghdad, says, "NUSACC is a strong supporter of U.S. industry and a great friend of the U.S. & Foreign Commercial Service. I would like to thank NUSACC for participating in the U.S. Pavilion as a Silver Sponsor. We greatly value their support."
​
Concluded Ambassador Beecroft, "The role of American companies in Iraq extends far beyond the business deals that they are executing. They are building partnerships and friendships, connections that will underpin the enduring bilateral relationship between our two nations" for many years to come.
HOME | Privacy Policy | My Dashboard | About | Contact | Sitemap
Copyright © 2022, National U.S.-Arab Chamber of Commerce. All Rights Reserved