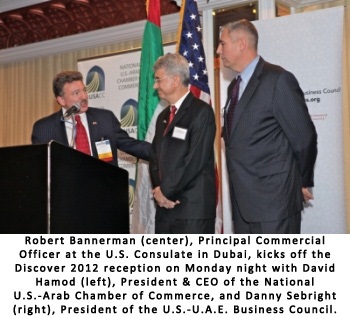 A senior corporate delegation from the United Arab Emirates joined members of the United States Commercial Service and executives from U.S. companies for a reception in Atlantic City, New Jersey on Monday evening -- kicking off the U.S. Commercial Service's Discover 2012 Global Business Forum. The reception, co-hosted by the National U.S.-Arab Chamber of Commerce (NUSACC) and the U.S.-U.A.E. Business Council, drew more than 200 business leaders from up and down the Atlantic Seaboard, from New Jersey to South Carolina.

The reception was held in honor of the visiting delegation from the Emirates, which is currently on a two-week trade mission across the United States: the "Dubai & Northern Emirates - USA Roadshow." The delegation, led by Robert Bannerman, Principal Commercial Officer at the U.S. Consulate in Dubai, is comprised of senior executives and government officials from three of the U.A.E.'s seven emirates: Dubai, Ras Al Khaimah, and Sharjah.

David Hamod, President & CEO of NUSACC, and Danny Sebright, President of the U.S.-U.A.E. Business Council, provided welcome remarks at the reception. In their comments, Hamod and Sebright underscored the importance of highlighting the U.A.E. as an emerging global commercial destination and transit point, encouraging American companies to explore potential partnership opportunities with the delegation.
​
Following the hosts' opening remarks, Adam Wilczewski, Chief of Staff for U.S. Under Secretary of Commerce for International Trade Francisco Sánchez, welcomed the U.A.E. delegation. He emphasized the U.S. International Trade Administration's commitment to developing key relationships with the U.A.E. and other emerging global markets around the world to boost exports and sustain American jobs.

​Prior to introducing the delegation, Robert Bannerman echoed Wilczewski's comments and invited the delegation to use the Discover 2012 conference as an opportunity to explore how the services of the U.S. Commercial Service and its public and private sector partners could benefit their business objectives in the United States. Following his brief remarks, Bannerman then introduced delegation members and invited reception attendees to network with the U.A.E. delegates.

"The reception and the Discover 2012 conference provide an important opportunity for senior officials and corporate executives from the U.A.E. to engage in an open discussion about the regional business climate in the Middle East and national business climate in the Emirates with their American counterparts," said Hamod.
​
"The U.A.E. is currently America's top export destination in the region, and each emirate presents a unique business case for American companies to consider," said Sebright. "It is important for corporate decision-makers from the U.A.E. to highlight the strength of the U.S.-U.A.E. commercial relationship from their perspective and to raise awareness about the transparent business climate in the Emirates to audiences around the United States." 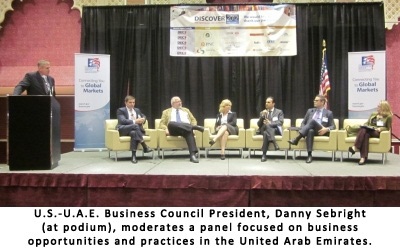 ​On Tuesday morning, the Discover 2012 conference opened with two panels focused on the Middle East and the U.A.E. The first focused on the geopolitical and corporate climate in the broader Middle East and featured commentary from NUSACC's David Hamod. The second featured members of the U.A.E. delegation and centered on the U.A.E. as a regional gateway and hub for international trade and commerce. The second panel was moderated by the U.S.-U.A.E. Business Council's Danny Sebright.
​
Following the panels, the delegation attended a full day of targeted meetings and business-to-business matchmaking sessions in Atlantic City. For more information about the Discover 2012 program, visit http://export.gov/newjersey/discover2012.
The "Dubai & the Northern Emirates - USA Roadshow" is organized by the Commercial Service at the U.S. Consulate in Dubai in partnership with the National U.S.-Arab Chamber of Commerce (NUSACC) and the U.S.-U.A.E. Business Council and supported by the Trade & Commercial Office at the Embassy of the U.A.E. in Washington, D.C. After Atlantic City, the delegation will travel to Minneapolis, Seattle, and Dallas/Fort Worth before returning to the United Arab Emirates.
About the U.S. Commercial Service:
The U.S. Commercial Service is the trade promotion arm of the U.S. Department of Commerce's International Trade Administration. U.S. Commercial Service trade professionals in over 100 U.S. cities and in more than 75 countries help U.S. companies get started in exporting or increase sales to new global markets.
Website: www.trade.gov/cs