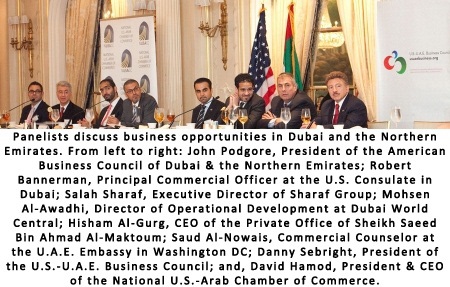 A senior corporate delegation representing the United Arab Emirates (U.A.E.) is in the United States this week for a five-city trade mission across the country. The U.S. Consulate in Dubai is leading the mission, which began today in New York City with a luncheon in honor of the delegation at the Essex House hotel. The event brought together more than 200 senior government officials, private sector executives, and key stakeholders from the U.S. and U.A.E., and it featured a panel discussion on the business climate in the Northern Emirates with senior Emirati industry representatives. U.S. Under Secretary of Commerce for International Trade Francisco Sánchez made opening remarks.
​
Emirati executives on the panel included: H.E. Hisham Al-Gurg, CEO of the Private Office of Sheikh Saeed Bin Ahmad Al-Maktoum, a member of the Dubai royal family; Mohsen Al-Awadhi, Director of Operational Development at Dubai World Central; and Salah Sharaf, Executive Director of Sharaf Group, a Dubai-based conglomerate with companies specializing in information technology, shipping, retail, real estate, financial services, consumer products, travel and tourism, and construction. The U.A.E. business representatives were joined on the panel by Under Secretary Sánchez; Principal Commercial Officer at the U.S. Consulate in Dubai, Robert Bannerman; Commercial Counselor at the U.A.E. Embassy in Washington DC's Trade & Commercial Office, Saud Al-Nowais; President of the American Business Council of Dubai & the Northern Emirates, John Podgore; President & CEO of the National U.S.-Arab Chamber of Commerce, David Hamod; and President of the U.S.-U.A.E. Business Council, Danny Sebright. 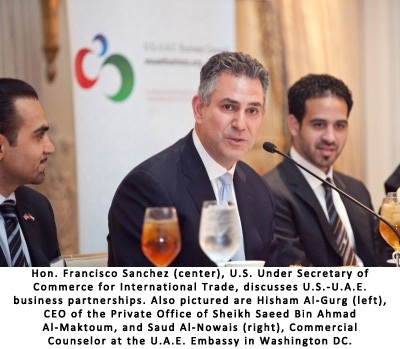 ​Following a welcome and introduction from Hamod and Sebright, Under Secretary Sánchez provided remarks underlining the viability and strength of the U.S.-U.A.E. economic relationship and encouraging American companies in the room to meet and discuss potential partnerships with their counterparts from emirates that are taking part in this delegation (Dubai, Ras Al-Khaimah, and Sharjah).

"The partnership between the United States and the United Arab Emirates is defined by progress and potential. Every day, American businesses export products and services that are helping to fuel economic growth in the U.A.E, benefiting the people and economies of both countries," said Sánchez. "I am honored to participate in this unique gathering of leaders from the public and private sectors, all of whom have come together with two important goals: expanding opportunity and building for the future. Together, we can ensure that the U.S.-U.A.E. partnership continues to advance mutual interests."
​
After Sánchez's comments, Bannerman addressed the New York City audience, underscoring the trade mission's value proposition to American and Emirati businesses. "The U.S.-U.A.E. economic partnership is a key component of the overall diplomatic relationship between the two countries," said Bannerman. "The 'Dubai & the Northern Emirates - USA Roadshow' and trade missions like it are vital to the promotion and expansion of U.S.-U.A.E. commercial ties." 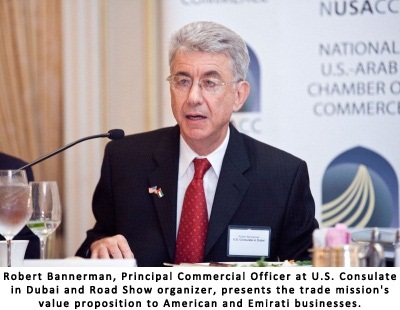 ​During the panel discussion that followed, Emirati executives expressed the importance of the U.S. trip to raise the profile of business opportunities in the Northern Emirates and to boost trade partnerships between the two countries.

"Today, our delegation has a unique opportunity to raise awareness about the open and transparent corporate climate in the Northern Emirates and the broader U.A.E.," said Al-Gurg. "My fellow delegates and I are honored to be here in New York City and look forward to advancing connections and partnerships formed throughout our trip to the United States."

"The U.S. and the U.A.E. share many of the same economic goals for the future, including building a sustainable economy supported by world-class infrastructure," said Al-Awadhi. "With solid partnerships formed previously and during this trip with American companies and others around the world, I am confident that Dubai and the broader U.A.E. will continue to be on the forefront of infrastructure innovation in the Middle East."

"Our delegation represents businesses across several sectors important to the economic growth of both the U.S. and U.A.E.," said Sharaf. "Moreover, this trade mission will provide our businesses from the Northern Emirates with excellent exposure to both public and private sector decision-makers and to potential American business partners in key markets around the United States."
​
After the panelists introduced themselves and their business interests, the floor was opened for discussion between the panelists and guests. 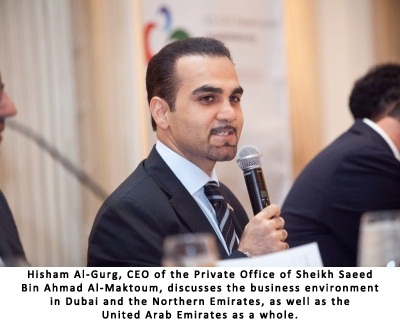 ​"It is important -- now more than ever -- for America and our partner countries in the Arab world to highlight the strength and vast potential of bilateral economic relationships underpinning U.S.-Arab relations," said Hamod following the event. "It was evident today that the U.A.E. is getting its message across exceptionally well, setting a high standard for the rest of the region."

"Today's lunch and the entire trade mission program will contribute to informing key audiences in global markets around the U.S. about potential commercial opportunities in the Northern Emirates," added Sebright. "New partnerships formed during these two weeks have the potential to fuel economic growth and create new jobs."

As the largest financial center globally, New York City is home to key international companies in such sectors as banking and financial services, insurance services, and healthcare. New York City is the second largest city economy in the world and is home to the world's largest stock exchange. Times Square, the Empire State Building, and many other famous landmarks are located in New York City, making it one of the most popular tourist destinations in the world. Some of the top companies based in New York City include American Express, Bank of New York Mellon, Citigroup, Goldman Sachs Group, Hess, J.P. Morgan Chase, MasterCard, McGraw-Hill, Morgan Stanley, New York Life, PepsiCo, Pfizer, Times Warner, Travelers Insurance, Verizon Communications, and Viacom.
​
The 'Dubai & the Northern Emirates - USA Roadshow' is organized by the Commercial Service at the U.S. Consulate in Dubai, in partnership with the National U.S.-Arab Chamber of Commerce (NUSACC) and the U.S.-U.A.E. Business Council and supported by the Trade & Commercial Office at the Embassy of the United Arab Emirates in Washington DC. After New York, the delegation will travel to Atlantic City, Minneapolis/St. Paul, Seattle, and Dallas/Fort Worth before returning to the United Arab Emirates.
About the U.S. Commercial Service:
The U.S. Commercial Service is the trade promotion arm of the U.S. Department of Commerce's International Trade Administration. U.S. Commercial Service trade professionals in over 100 U.S. cities and in more than 75 countries help U.S. companies get started in exporting or increase sales to new global markets.
Website: www.trade.gov/cs