​A trade delegation comprised of senior business leaders and government officials from the United Arab Emirates (U.A.E.) concluded a five-city tour of the United States with an international conference and luncheon in Dallas/Fort Worth, Texas on Wednesday. The conference, hosted by the U.S. Commercial Service in partnership with the National U.S.-Arab Chamber of Commerce and the U.S.-U.A.E. Business Council, took place at the new Irving Convention Center and brought senior executives and government officials from the U.S. and U.A.E. together for a day of corporate briefings, events, and networking opportunities. The 'USA Roadshow' has already visited: New York City, New York; Atlantic City, New Jersey; Minneapolis, Minnesota; and Seattle, Washington. The delegation is being led by Robert Bannerman, Principal Commercial Officer at the U.S. Consulate in Dubai. 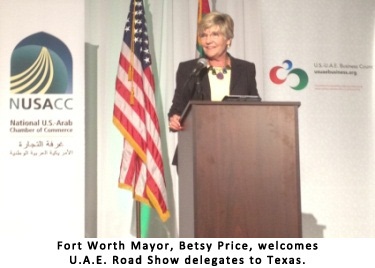 The conference was anchored by a luncheon, held in honor of the delegation, featuring remarks from Betsy Price, Mayor of Fort Worth, and His Excellency Hisham Al Gurg, Chief Executive Officer of the Private Office of Sheikh Saeed Bin Ahmad Al Maktoum in Dubai.

NUSACC Executive Vice President Curt Silvers and U.S.-U.A.E. Business Council President Danny Sebright provided welcoming remarks at the luncheon. In their comments, Silvers and Sebright underscored the importance of the Dallas/Fort Worth metropolitan market to the overall U.S.-U.A.E. trade relationship.

"Dallas/Fort Worth is home to a number of American companies with international operations in the U.A.E. and the broader Middle East region," said Silvers. "Furthermore, both business communities share an intense focus on cultivating innovation and entrepreneurship locally and around the world."

"Texas exported over $2 billion of U.S. goods to the U.A.E. last year, supporting such key industries as energy, infrastructure, transportation, healthcare, and education," said Sebright. "Today's events helped to introduce the delegation to some of these companies, many of which directly support American jobs and fuel economic growth between the U.S. and U.A.E."
​
Following opening remarks, Mayor Betsy Price welcomed the U.A.E. delegation to the Dallas/Fort Worth metropolitan area. In her remarks, Mayor Price spoke highly of her recent visit to the U.A.E. in September with a U.S. delegation and highlighted the deep and growing commercial, cultural, and social relationship between the two global communities. 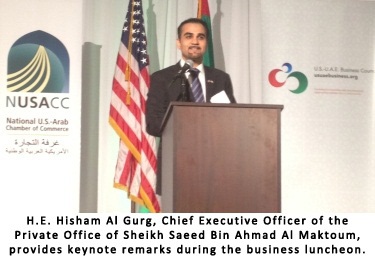 ​"Fort Worth is honored to be a part of the effort to create new business connections between the United Arab Emirates and Texas," said Mayor Price. "Programs like this show that we all share a commitment to expanding tourism, trade, and business between our regions. Now, it's up to us to take advantage of this commitment with new global airline connections that support business-to-business opportunities and, ultimately, jobs in North Texas."

"The delegation and I are honored to end our tour of the United States here in the Dallas/Fort Worth area," said Al Gurg. "Our communities share a keen interest in boosting commercial partnerships across key sectors and a common resolve to build a sustainable global economy for the future."

Wednesday's conference kicked off in the morning with introductory remarks by Robert Bannerman, NUSACC's Silvers, and the U.S.-U.A.E. Business Council's Sebright. In their comments, Silvers and Sebright welcomed the U.A.E. delegation and provided the audience with context surrounding the group's visit to the United States and, more specifically, to the Dallas/Fort Worth area.
​
Robert Bannerman highlighted the importance of the visit, emphasizing the U.S. Commercial Service's role in supporting President Obama's National Export Initiative (NEI), a point echoed by Sebright and Silvers during the luncheon. In his remarks, Bannerman provided an overview of the economic sectors represented by the delegation and encouraged executives in the audience to discuss business opportunities with their counterparts from the Emirates.

​After words of welcome, members of the U.A.E. delegation -- as well as Talal Kaissi, Chief of Staff of the Trade & Commercial Office at the U.A.E. Embassy -- initiated a panel discussion on the corporate climate, national infrastructure, and social culture in the U.A.E. The panel was moderated by Robert Bannerman and focused largely on commercial and investment opportunities in the Northern Emirates of Dubai, Ras Al Khaimah, and Sharjah. After the formal program, Bannerman opened the floor to questions, providing a forum to engage in an open discussion with the panel of U.A.E. representatives.

Following the opening panel, individual presentations were given by members of the U.A.E. delegation. Each presentation allowed delegates to outline their respective business objectives in the U.S. and to brief the audience about their commercial activities in the U.A.E. After the morning sessions and the luncheon, delegates attended targeted meetings and business-to-business matchmaking sessions.
​
The delegation was welcomed to the Dallas/Fort Worth area on Tuesday with a reception at Cowboys Stadium hosted by Jeffrey P. Fegan, Chief Executive Officer of the Dallas/Fort Worth International Airport (DFW). On Thursday, the group conducted site visits to Dallas/Fort Worth area companies and infrastructure facilities. The visits were anchored by a lunch and briefing at DFW airport hosted by John Terrell, Vice President of DFW International Airport Commercial Development.

​Dallas/Fort Worth is home to companies in such emerging sectors as energy and technology. The metro area is the third most popular destination for business travel in the United States and boasts one of the largest convention centers in the nation, the Dallas Convention Center. Dallas is particularly well known for its legendary football franchise, the Dallas Cowboys, who play in the largest stadium in the United States. Some of the top companies in the Dallas/Fort Worth area include AT&T, Bell/Textron, ConocoPhillips, Dell, ExxonMobil, Lockheed Martin, Sysco, Tesoro, Texas Instruments, and Valero Energy.
​
The 'Dubai & the Northern Emirates - USA Roadshow' is organized by the Commercial Service at the U.S. Consulate in Dubai in partnership with the National U.S.-Arab Chamber of Commerce (NUSACC) and the U.S.-U.A.E. Business Council and supported by the Trade & Commercial Office at the Embassy of the U.A.E. in Washington, D.C. Dallas/Fort Worth marks the delegation's fifth and final stop in the U.S. before they return to the U.A.E. later this week. Over the course of the visit, the U.A.E. delegation met with hundreds of executives representing all facets of American industry and several U.S. officials directly responsible for international economic development.
About the U.S. Commercial Service:
The U.S. Commercial Service is the trade promotion arm of the U.S. Department of Commerce's International Trade Administration. U.S. Commercial Service trade professionals in over 100 U.S. cities and in more than 75 countries help U.S. companies get started in exporting or increase sales to new global markets.
Website: www.trade.gov/cs