​The National U.S.-Arab Chamber of Commerce (NUSACC), the Embassy of the Republic of Tunisia, and the World Bank recently co-hosted a roundtable discussion featuring Tunisia's Minister of Investment & International Cooperation, H.E. Riadh Bettaieb, and Tunisia's Minister of Finance, H.E. Hassine Dimassi. The off-the-record discussion with some of Tunisia's most senior officials drew a capacity crowd at the headquarters of the World Bank.
​
"Tunisia is on the road to economic recovery," stated David Hamod, President & CEO of the U.S.-Arab Chamber, "and thoughtful discussions like these help to provide a road map for Tunisia's leadership. These sessions also offer insights that help to guide America's private sector as we consider ways to build the commercial relationship and assist Tunisia to get back on its feet." 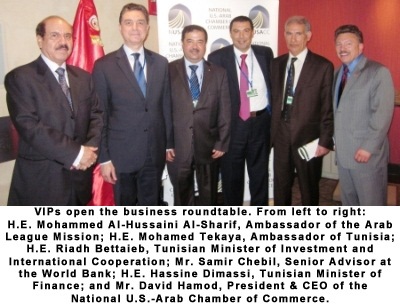 H.E. Riadh Bettaieb, Minister of Investment and International Cooperation, highlighted some of the steps that Tunisia is taking to attract foreign investors, including overhauling the nation's investment laws and diversifying Tunisia's economy. He noted that industrial productivity is up ten percent over the past year, and he expects that private investment in Tunisia will grow 15 percent in the next year.

"Tunisia's industrial fabric is healthy and developed," said Minister Bettaieb, and Tunisia is a "gateway to Africa and a regional hub for higher education." Tunisia has the greatest comparative advantages of any nation in Africa, he suggested, which helps to explain why 30 percent of the European cars assembled in Tunisia include components produced locally in the country. He concluded, "The bottom line is that we are creating a climate of confidence for investors."

H.E. Hassine Dimassi, Minister of Finance, highlighted some of Tunisia's high growth sectors, including agribusiness, renewable energy, information & communications technologies (ICT), and development of the nation's infrastructure -- factories, roads, ports, airports, desalination facilities, logistics hubs, and other commercial opportunities. Tunisia is planning to "diversify and intensify" its efforts to attract investment from all over the world, he suggested, with a view to "placing the economy on a solid basis."

"For Tunisia's recovery to stay on track, we need to raise $5 billion and overcome a deficit equivalent to 6.5 percent of our GDP," said Minister Dimassi. "Tunisia is very grateful to the United States, and the American people, for providing loan guarantees and for offering $100 million in grants that will help us to rebuild." That said, he admitted, "next year may be tougher than this year."

This projection is consistent with a forthcoming study by the National U.S.-Arab Chamber of Commerce that forecasts challenges for Tunisia in the short-term, followed by respectable economic growth in the longer term. Real GDP growth, flat in 2011, is slated to grow to 4.8 percent by the year 2015. U.S. merchandise exports, at just over $500 million last year, are on track to more than double to $1.24 billion by 2015. Tunisia's Foreign Investment Promotion Agency (FIPA) reported recently that foreign direct investment grew 35 percent in the early months of 2012, and the number of visitors to Tunisia is expected to grow by 20 percent in 2012, according to the Ministry of Tourism.

During the discussion at The World Bank, the two ministers provided an optimistic, yet realistic, assessment of the business climate in Tunisia. On the one hand, they said, work is moving apace to draft more attractive laws for investment, franchising, and industrial zones, for example, with a promise to enhance public / private cooperation by June of this year. On the other hand, the ministers admitted, the social needs of Tunisia are widespread, and they need to be addressed urgently.

The same challenges are evident in Tunisia's efforts to promote a democratic process in which all Tunisian stakeholders have a voice. Minister Dimassi pointed out that the Government of Tunisia is "balancing between two needs: Maintaining as much openness and transparency as possible in preparation for our elections, while also providing adequate security." But on one point, he said, there is unanimity throughout the country: "All Tunisians agree on creating a modern nation with a vibrant civil society."

In this vein, the issue of Tunisia's constitution loomed large during the wide-ranging discussion at The World Bank. It is clear that the drafting process is still a work in process, but it is apparent that the Government of Tunisia is deeply committed to seeing this process through. The National Constituent Assembly began drafting a new constitution this past February, and the Assembly hopes to have a new constitution approved by the end of this year. If all goes well, elections will take place by March of next year. 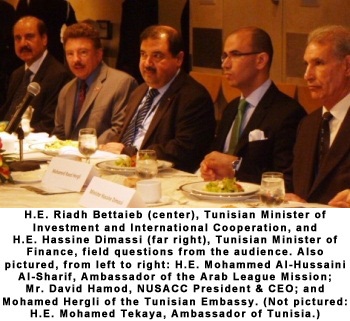 ​Drafting of the new constitution has implications in Tunisia and throughout the Arab world, of course, but it also affects all nations that have been gaining inspiration from the Arab Spring. In the words of Duncan Pickard in an article released recently by the Carnegie Endowment for International Peace, "One hundred fifty years after writing the Arab world's first constitution, Tunisia is again making history. This time, its newly elected leaders are engaged in the region's first constitution-making process outside the influence of a dictator or a colonial power."

In his remarks at The World Bank, Minister Bettaieb reinforced this view: "Ours is a revolution in which every Tunisian is involved. We have seen an explosion in Tunisia's freedom of expression," and there is no turning back, he suggested. He stated unequivocally: "Any party looking to monopolize the elections will fail. Tunisia's constitution is based on consensus."

Tunisia has historically boasted one of the best educated work forces in the Arab world, and tapping into these human resources is central to any development strategy being devised by the Government of Tunisia today. At any given time, according to Minister Bettaieb, some 16,000 graduates are looking for work in Tunisia. Frustration over the inability to find appropriate jobs helped to spark Tunisia's revolution more than a year ago, and the Government of Tunisia today is acutely aware of the need to generate productive employment and build capacity in the workplace.
The global Tunisian diaspora -- including Americans of Tunisian descent -- is positioned to play a vital role in transferring technology and knowledge "back home" to the new Tunisia. This message came through loud and clear in the discussion at The World Bank, a session that attracted numerous Tunisians who have achieved success in the United States.

This point was highlighted by Mr. Samir Chebil, Executive Director Senior Advisor at The World Bank. He characterized the roundtable discussion as "historic," the first gathering of its kind to bring together senior ministers, Tunisian professionals at the World Bank and International Monetary Fund, and prominent American investors. "Following the first open and transparent elections in the history of Tunisia last October," he said, "today's discussions were exceptionally frank and constructive, with no taboo topics. It is my sincere hope that these kinds of meetings will take place more often going forward."

Tunisia's Ambassador to the United States, H.E. Mohamed Salah Tekaya, sounded a similar theme. The roundtable session "brought together stakeholders from the World Bank, the private sector, and our respective governments," he said. "The discussions focused on the progress achieved by Tunisia in its transition to democracy and on the efforts to fulfill the aspirations of the Tunisian people for dignity and freedom." He concluded, "In their remarks, the ministers explained the economic and social challenges that Tunisia is trying to meet, as well as the opportunities that our nation offers, including incentives and advantages granted to investors."

The last word was reserved for the two ministers. H.E. Riadh Bettaieb stated, "When you invest in Tunisia, you are also investing in democracy and freedom," and H.E. Hassine Dimassi concluded, "We need our friends now more than ever."
HOME | Privacy Policy | My Dashboard | About | Contact | Sitemap
​Due to COVID-19,  and in the interest of public safety, walk-in service at NUSACC is temporarily suspended. Because our clients deserve the best possible service, certification services will continue to be offered by MAIL.