U.S.-ARAB CHAMBER AND TRIPOLI CHAMBER SIGN
HISTORIC AGREEMENT TO PROMOTE TRADE AND
INVESTMENT BETWEEN THE USA AND LIBYA 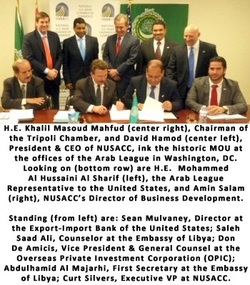 "Today's historic signing paves the way for more extensive economic cooperation between our two chambers," said David Hamod, President & CEO of the U.S.-Arab Chamber.  "This MOU formalizes a partnership between the Tripoli Chamber and the National U.S.-Arab Chamber of Commerce that has been forged over the years through sincere friendship, shared values, and mutual respect."

Since 2004, the National U.S.-Arab Chamber of Commerce has made more trips to Libya -- and brought more U.S. companies to Libya -- than any other business entity in the United States.  On each of those seven visits to Libya, the U.S.-Arab Chamber has partnered in an official capacity with the Tripoli Chamber.  The two chambers are affiliated through the Arab League and the General Union of Arab Chambers of Commerce, Industry & Agriculture, the umbrella organization that provides official recognition and accreditation of chambers of commerce linked to the 22 nations of the Arab world. 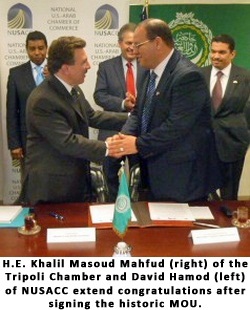 ​At the signing ceremony, the Tripoli Chamber was represented by its Chairman, H.E. Khalil Masoud Mahfud, and Mr. Farag Muftah Al Mabrouk, a Chamber Board Member and Chairman of the Committee for Small & Medium-Sized Enterprises (SMEs).  The National U.S.-Arab Chamber of Commerce was represented by its President and CEO David Hamod, Executive Vice President, Curt Silvers, and Director of Business Development, Amin G. Salam.

Chairman Mahfud of the Tripoli Chamber noted, "The new MOU signed today is aimed at promoting trade and investment between our two countries and strengthening the historical relationship and constructive agreements between our two chambers." He added, "We celebrate today, as we begin this new journey together, the launching of the Libya - U.S. Joint Business Council, by doubling our efforts to promote trade and investment between our two countries and to create new jobs through the promotion of trade. Today's celebration opens a new chapter of economic relations between Libya and the United States of America. I am confident that the success we have achieved in the past working with our sister chamber will help us achieve tangible results and move forward towards a brighter future and a more prosperous world for our peoples." 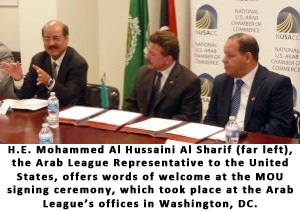 ​H.E. Mohammed Al Hussaini Al Sharif, the Arab League's Representative to the United States, noted that the Memorandum of Understanding "helps to pave the way for economic development and capacity-building in Libya, a member nation of the League of Arab States.  Our office was honored to host this signing ceremony between two highly respected business associations that have a long history of cooperation with the League of Arab States, and we look forward to supporting similar endeavors in the future that promote commercial links between Arab countries and nations like the United States."

The MOU builds upon the historic visit to Washington DC this month by H.E. Abdurrahim El-Keib, Prime Minister of Libya, as well as two previous MOUs signed between the U.S.-Arab Chamber and the Tripoli Chamber in 2007 and 2010, respectively.
​
The MOU revolves around the creation of a new Libya - U.S. Joint Business Council, which will provide a framework for strengthening economic relations between the two nations.  The new private sector entity will be dedicated to promoting free enterprise, economic growth, job creation and, ultimately, a better quality of life.  The MOU calls for the Joint Business Council to: 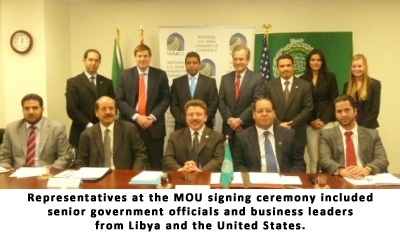 As a first step, a representative of the Tripoli Chamber will be appointed to the Board of Directors of the U.S.-Arab Chamber (NUSACC), and a representative of NUSACC will serve as a Strategic Advisor to the Tripoli Chamber of Commerce.
​
In his concluding remarks, David Hamod of the National U.S.-Arab Chamber of Commerce noted, "In the Arab world, we say that 'one hand alone cannot clap.'  With this in mind, our two organizations are joining hands today to create an entity that -- in cooperation with our government colleagues -- will provide the highest level of service to stakeholders in Libya and the United States."
HOME | Privacy Policy | My Dashboard | About | Contact | Sitemap
​Due to COVID-19,  and in the interest of public safety, walk-in service at NUSACC is temporarily suspended. Because our clients deserve the best possible service, certification services will continue to be offered by MAIL.