​U.S. Ambassador Says Business Leaders Will
"Tell the Story of a Different Side of Yemen"

The National U.S.-Arab Chamber of Commerce (NUSACC) hosted a reception this evening for a high-level business delegation from the Republic of Yemen. The visit by a 12-member delegation was organized by the Business Council for International Understanding and the U.S. Embassy in Sana'a, and the delegation is being accompanied by the Honorable Gerald Feierstein, U.S. Ambassador to Yemen. Delegates are in the United States until October 26, and they are visiting six cities: New York City, Philadelphia, Washington DC, Kansas City, Houston, and San Francisco. 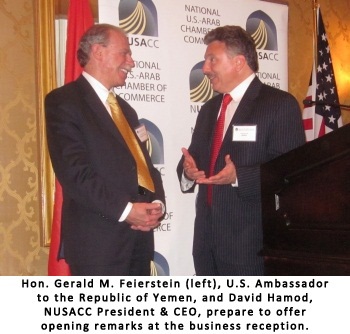 "Our visit to the United States at this time -- as Yemen emerges from its year-long political crisis and confronts the threat of violent extremism -- is to tell the story of a different side of Yemen, focused on economic growth and the prosperity of the Yemeni people," said Ambassador Feierstein. "The delegation represents the dynamic potential of Yemen's private sector, and we hope that we will leave the United States having established business-to-business ties that will grow and expand for years to come."

Ambassador Feierstein added, "We deeply appreciate NUSACC's support for this visit by the Yemen delegation, as well as NUSACC's historic contributions to U.S.-Yemen business relations."

David Hamod, NUSACC's President & CEO, responded, "Our Chamber is honored to host this distinguished delegation from Yemen, and we are grateful to the U.S. Embassy in Sana'a for the opportunity to be of service. The delegates are carrying a very positive message to business communities all around the United States, and their inspiring message is backed up by NUSACC data that show continued, positive growth in the U.S.-Yemen commercial relationship."

According to the Chamber's projections, soon to be released as part of NUSACC's 2015 Outlook, exports of U.S. goods and services to Yemen are on track to expand from $.43 billion in 2011 to $.67 billion by 2015 -- representing growth of 56 percent during the next four years. By 2015, top U.S. exports will include automobiles and light duty motor vehicles, wheat and other grains, and pharmaceuticals. High on the list of investment opportunities, according to the U.S. Embassy, are joint venture prospects in oil & gas, mineral exploration, fisheries, and agribusiness.

NUSACC data suggest that the U.S. share of Yemen's merchandise imports from around the world will grow from 4.3 percent last year to 4.7 percent by 2015. For services, U.S. market share will grow from 3 percent in 2011 to 4 percent by the end of 2015. While Yemen's economy shrank last year, largely as a result of political instability within the country, the economy is projected to grow by 6.3 percent this year, according to the International Monetary Fund (IMF).
​
One in three Yemenis is between the ages of 10 and 24, according to the IMF, and Yemen's population of 25 million persons is on track to double by the year 2030, making Yemen one of the most populous nations of the Arab world. Yemen's in-country workforce has grown to more than 7 million persons, according to U.S. Government sources, and many Yemenis are employed in Gulf Cooperation Council (GCC) nations, especially in the Kingdom of Saudi Arabia. 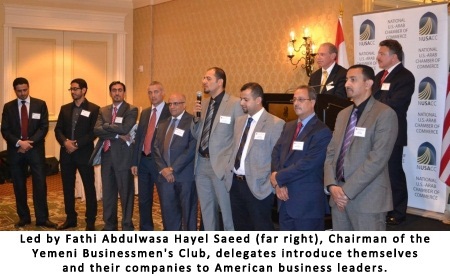 ​Ambassador Feierstein noted that the mission of the delegation is two-fold: First, to bring the two business communities together -- and others who have a shared interest -- to examine commercial opportunities. Second, the goal is to re-introduce Yemen to the American public and policymakers, who have been very heavily focused on Yemen's counter-terrorism efforts and political upheaval. These are important issues, suggested Feierstein, but they represent only part of Yemen's narrative.

For the Yemeni public, the ambassador suggested, the most important metric in determining whether the political transition is a failure or a success is growth of the economy. Simply put, Yemenis want jobs, economic growth, and development. If the political transition is to succeed, he offered, it will need to do so with the full cooperation of the private sector. "Yemen has a vibrant business community," Feierstein said, "and we want to use opportunities like this one to strengthen the private sector role and encourage governments to take steps to improve the business climate, to make it a more hospitable environment for foreign and domestic investment. We hope that American companies can be an important part of that story."

The ambassador's views were reinforced by Fathi Abdulwasa Hayel Saeed, Managing Director of NATCO Holding and Chairman of the Yemeni Businessmen's Club, whose members make up most of the delegation. For sustained economic growth to take place in Yemen, Mr. Hayel Saeed said, "We need international investments that will help to create jobs through the transfer of technology and knowledge. There is a fortune to be made in Yemen, with Greenfield opportunities that will provide a very good return on investment for the private sector." With this in mind, he said, "we encourage our American friends to jump into the market as soon as possible."
​
"This trip has gone beyond our expectations," Mr. Hayel Saeed concluded. "The Chamber's hospitality and warm reception have made us more enthusiastic than ever about strengthening the relationships between our two nations."
HOME | Privacy Policy | My Dashboard | About | Contact | Sitemap
Copyright © 2022, National U.S.-Arab Chamber of Commerce. All Rights Reserved