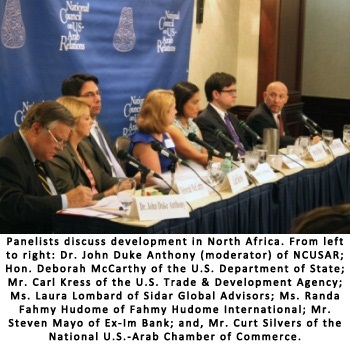 The panel was moderated by NCUSAR President & CEO, Dr. John Duke Anthony, who highlighted the importance of better education, deeper understanding, and stronger human connections between the United States and the Arab world. Panelists discussed the wide range of business opportunities available for U.S. companies in North Africa, with a particular focus on infrastructure, as well as U.S. Government resources available to support such business deals.

According to the U.S. Department of Commerce, U.S. exports reached $2.1 trillion in 2011 -- the highest total value in U.S. history -- and supported roughly 10 million American jobs. Growth in the Middle East and North Africa (MENA) region was representative of this trend, posting significant gains over the past year, despite the onset of the Arab Spring. According to data analyzed by NUSACC, U.S. goods exports to the Arab world increased from $48.77 billion in 2010 to $56.18 billion in 2011, an increase of 15.2 percent and the highest single-year sales volume ever.
​
Riding on the strength of commercial and military aircraft sales, the largest category of goods exported was Transportation Equipment, constituting $17.58 billion (31.3 percent) of total U.S. goods shipped to the Arab world. Other "Top Five" export sectors included Non-Electrical Machinery ($7.53 billion, 13.4 percent), Agricultural Products ($4.97 billion, 8.85 percent), Computer & Electronic Products ($4.21 billion, 7.5 percent), and Food & Kindred Products ($3.44 billion, 6.12 percent). The MENA region is not the largest market in the world for U.S. companies, but it is certainly one of the most strategic. 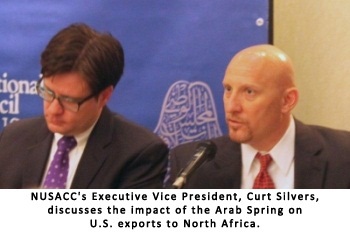 These findings are consistent with the Chamber's research that shows U.S. exports of goods and services to the Arab world growing to $117 billion by the end of next year. In coming weeks, NUSACC is scheduled to publish data on U.S. exports of goods and services to the MENA region through the year 2015. NUSACC's preliminary research suggests that exports will grow from $84 billion in 2011 to $167 billion by 2015. Of this amount, over $30 billion of U.S. exports are projected to be sold to the Arab countries of North Africa, including Egypt - more than doubling U.S. exports to North Africa from 2011.

"The Arab Spring has affected every country in the region in different ways, but it has meant more than just chaos and instability," Silvers noted. "The Arab Spring has also created opportunities through economic reforms, increased transparency, and the opening of markets that had largely been closed, particularly in North Africa." Of particular focus in the region are investments in construction, renewable energy development, and electric power generation. NUSACC's recently completed trade mission to Libya and Tunisia highlighted opportunities available to American companies looking to do business in the region.
​
"Despite the economic turbulence of the past 18 months," Silvers concluded, "American exports to the region clearly continue to grow. We are very encouraged by the upswing in U.S. exports, and we are optimistic that America's export trends to the region will continue to move in the right direction."
HOME | Privacy Policy | My Dashboard | About | Contact | Sitemap
​Due to COVID-19,  and in the interest of public safety, walk-in service at NUSACC is temporarily suspended. Because our clients deserve the best possible service, certification services will continue to be offered by MAIL.