​For First Time in Memory, Morocco Becomes One of
America's "Top 5" Export Destinations in the Arab World 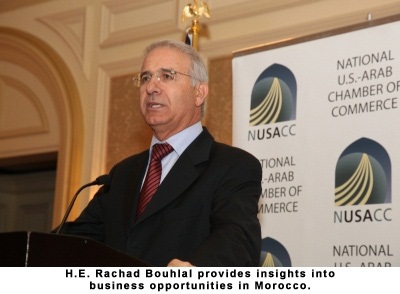 "It is our privilege to host H.E. Rachad Bouhlal, a consummate diplomat and a strong advocate for Morocco-U.S. commercial relations," said David Hamod, President & CEO of the U.S.-Arab Chamber. "He has a long and distinguished career in service to the Kingdom of Morocco, and NUSACC looks forward to working with him in the months ahead as he carries his message to business communities throughout the United States."

In his remarks, Ambassador Bouhlal noted that Morocco enjoyed a five percent rate of economic growth during the period 2007-2011, when many economies were stagnant as a result of the global economic downturn. Much of Morocco's success can be attributed to the nation's economic diversification, he suggested, particularly in high tech sectors. In the automotive sector, for example, Morocco will produce more than 500,000 cars per year for the European market. The same applies to aeronautics, Ambassador Bouhlal said, where Morocco has become an important manufacturing center for both Boeing and Airbus. As a result of these investments, he noted, Morocco now has training institutes that are turning out top engineers.
​
Morocco's commitment to renewable energy is also emerging as a success story, the ambassador said. The Kingdom is investing $9 billion through the year 2020 to create an additional 2,000 MW of power from solar sources, he noted. In the same spirit of maximizing Morocco's natural resources, Ambassador Bouhlal said, Morocco is investing $1 billion per year to upgrade its agriculture sector. The nation is largely self-sufficient in agriculture, he suggested, but there is room for improvement in production techniques and agribusiness expansion.
Tourism has become a mainstay of the Moroccan economy, Ambassador Bouhlal said. Morocco is a favorite destination of Europeans, he noted, with increasing numbers of Europeans choosing to spend their vacations and retirement years in Morocco. 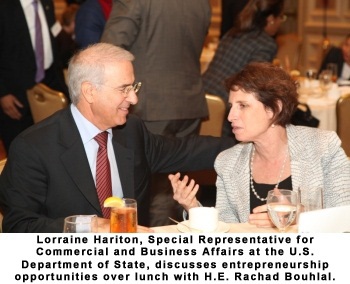 ​Morocco Becomes a "Top 5" U.S. Export Destination
In 2011, according to research compiled by the National U.S.-Arab Chamber of Commerce, Morocco for the first time in memory became one of America's top five export destinations in the Middle East and North Africa (MENA) region. U.S. goods exported to Morocco last year totaled over $2.86 billion, a 47 percent increase over 2010, making Morocco the fourth largest market in the Arab world for U.S. goods. This is good news for President Obama's National Export Initiative (NEI), which aims to double the number of U.S. exports worldwide by the end of 2014.

Hamod went on to say, "It is important to note that this surge in exports was not a one-way street. Moroccan exports to the United States last year jumped more than 45 percent to just under $1 billion. Our Chamber believes that this increase in trade both ways may be a reflection of the growing importance and value of the Morocco-U.S. Free Trade Agreement (FTA)." 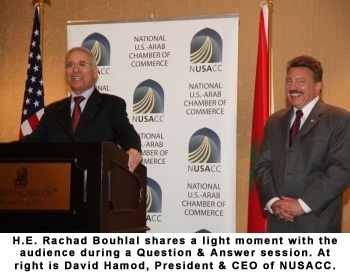 ​Morocco-U.S. Free Trade Agreement
That FTA, signed in 2004 and entered into force in 2006, constituted the first U.S. Free Trade Agreement in Africa and the second such accord with the Arab world. Right off the bat, the FTA eliminated duties on 95 percent of bilateral trade in industrial and consumer goods, with duties on certain sensitive products, including agriculture, to be phased in over 10 years.

According to the Office of the U.S. Trade Representative, the U.S.-Morocco FTA "supports the significant economic and political reforms that are underway in Morocco and provides for improved commercial and market opportunities for U.S. exports to Morocco by reducing and eliminating trade barriers."

On a historic note, the National U.S.-Arab Chamber of Commerce was one of the founding institutions that made up the U.S.-Morocco Free Trade Agreement Coalition, which played an instrumental role in raising awareness about benefits of the proposed FTA. Moreover, NUSACC was the only chamber of commerce invited by the House Ways and Means Committee to testify in person before that Committee at its Morocco FTA hearing on July 7, 2004.

Impact of the Arab Spring
Ambassador Bouhlal noted that because of H.M. King Mohammed VI's visionary leadership, Morocco has been able to stay "ahead of the curve" during the Arab Spring uprisings of the past year-and-a-half. He cited the far-reaching reforms implemented by Morocco in recent years, including a new national constitution codified in July 2011 that has encouraged better governance, greater accountability, and a more engaged civil society.

He admitted, however, that the global economic downturn and the Arab Spring have ushered in a host of challenges. Seventy percent of Morocco's exports go to the European Union, he said, but exports are down because of the Euro crisis. Despite the fact that Morocco is widely considered to be a "safe haven" for investments, he suggested, Arab Spring turmoil in neighboring North African nations has led to a 24 percent drop in foreign investment in the past year. On top of that, he suggested, Morocco -- as an exporter of agricultural goods -- has been more affected than most nations by the rise in oil prices and transportation costs, as well as the region's severe drought.

In response to a question about the nation's youth, whose population is growing very quickly, Ambassador Bouhlal said that Morocco's Gross Domestic Product (GDP) needs sustained growth in order to absorb the nation's population growth. To accommodate this growing population, he noted, Morocco is investing in a wide range of infrastructure projects and is on track to construct up to 150,000 housing units per year.

Ambassador Bouhlal received his undergraduate degree in Mathematics in 1970 and his MBA in Rouen, France. He has received numerous international honors, including but not limited to the Order of the Throne of the Kingdom of Morocco, Commander of the Order of Leopold by the King of Belgium, Grand Cross of the Federal Republic of Germany by the President of Germany, and Officer of the Legion of Honor in France.
​
In his concluding remarks, H.E. Rachad Bouhlal stated, "During these challenging times of political and economic transition in the MENA region, the National U.S.-Arab Chamber of Commerce is taking preeminent action in strengthening trade and investment between the USA and the Arab nations by providing important insights into opportunities and challenges. As Ambassador of the Kingdom of Morocco, I am very honored and excited to work side by side with NUSACC in order to further foster the economic and commercial relations that exist between my country and the United States."
HOME | Privacy Policy | My Dashboard | About | Contact | Sitemap
Copyright © 2022, National U.S.-Arab Chamber of Commerce. All Rights Reserved