​The National U.S.-Arab Chamber of Commerce (NUSACC) recently supported the 2012 Business Summit at Johns Hopkins University entitled "To and From the Middle East: New Business Opportunities." The event, in support of Maryland Governor Martin O'Malley's "Middle Eastern American Business Initiatives," was organized by the Governor's Commission on Middle Eastern American Affairs, the Maryland Department of Business and Economic Development, the Maryland Middle East Chamber of Commerce, and Johns Hopkins University. 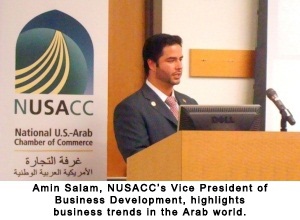 Amin Salam, Vice President for Business Development at NUSACC and a keynote speaker for the event, stated, "Our Chamber is proud to support the Governor's Business Summit. Working together, in a public/private partnership, we are helping to pave the way to the Middle East for numerous U.S. companies, particularly small & medium-sized enterprises."
In the panel discussion on "Doing Business with the Middle East," Salam provided an overview of business trends throughout the region. He noted that U.S. exports to the region are doubling every four years and that American goods and services are on track to grow from $84 billion in 2011 to $168 billion by 2015, creating 1.5 million U.S.-based jobs. He said that demand for U.S. exports is driven largely by the Gulf Cooperation Council (GCC) countries -- led by the United Arab Emirates (UAE) and Saudi Arabia -- which currently make up approximately 70 percent of the region's demand for imports from the United States.

However, that percentage is slated to drop to about 65 percent by 2015, Salam said, when non-GCC nations like Iraq and Libya are expected to experience higher demand for U.S. products. 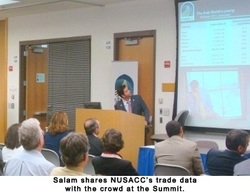 ​NUSACC's Salam noted that Arab nations that have signed Free Trade Agreements (FTAs) with the United States -- notably Bahrain, Jordan, Morocco and Oman -- are turning in impressive results and are avoiding some of the "peaks and valleys" that have characterized their trade posture in years past. According to a forthcoming report by the National U.S.-Arab Chamber of Commerce, the value of U.S. bilateral trade with these trade partners over the past four years grew at an average annual rate of 13.5 percent. This outpaced the average annual yearly growth (8.4 percent) in bilateral trade over the same time period with other bilateral FTAs and was more than double the six percent growth rate of overall U.S. trade with the world. Salam concluded, "Average annual bilateral trade growth with Arab FTA partners was seven percent in the years preceding an FTA with the United States. After FTA implementation, the average annual bilateral growth surged to 27 percent."
​
U.S. market share throughout the region is generally holding steady or growing, Salam said, but he cautioned against "waiting for just the right time" for companies to make their approach. He cited increasingly aggressive competition, particularly from the BRIC countries. "The American brand is synonymous with quality and capacity," Salam noted, "but doing business in the Middle East is not a stroll in the park. Everybody and his brother from around the world are competing for opportunities there." 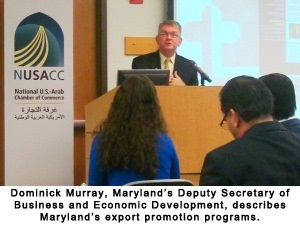 ​Serving on the same panel was Dominick Murray, Maryland's Deputy Secretary of the Department of Business and Economic Development, who thanked the National U.S.-Arab Chamber of Commerce for its participation in the Summit and NUSACC's continued support to the State of Maryland.

Murray highlighted a number of business initiatives for the State of Maryland, including: Invest Maryland, the State's pioneering $84 million venture capital initiative, a prime example of why Maryland is well-positioned for success in the New Economy;  Export MD, a program for eligible Maryland companies to receive up to $10,000 in reimbursements for expenses associated with participation in an international marketing initiative; Skills2Compete (S2C), Governor O'Malley's vision for Marylanders to build capacity and develop new skills for the workplace. The Deputy Secretary also touted the Governor's recent launch of the Invest Maryland Challenge, a $300,000 business competition to help identify and support new start-ups in Maryland. 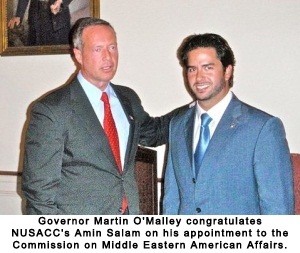 ​The 2012 Business Summit is the first event of its kind for the State of Maryland and is directed towards developing economic ties with the Middle East & North Africa (MENA) region. It is the first of a series of quarterly business events focusing on business with the region, including workshops, seminars, roundtable discussions, and more. These events -- organized by the Governor's Office, the Commission on Middle Eastern American Affairs, and the Department of Business and Economic Development -- will be supported by the National U.S.-Arab Chamber of Commerce and Johns Hopkins University, the largest private employer in Maryland and the academic institution housing the Paul H. Nitze School of Advanced International Studies (SAIS) -- one of the top graduate schools for international diplomacy and economics in the United States.
​
NUSACC's Amin Salam was appointed earlier this year by Governor O'Malley to serve for a term of four years on the Governor's Commission on Middle Eastern American Affairs with a focus on international business development. In that capacity, Salam is working closely with the Maryland Governor's office and the Department of Business and Economic Development to strengthen commercial and economic ties between the State of Maryland and the MENA region.
HOME | Privacy Policy | My Dashboard | About | Contact | Sitemap
​Due to COVID-19,  and in the interest of public safety, walk-in service at NUSACC is temporarily suspended. Because our clients deserve the best possible service, certification services will continue to be offered by MAIL.