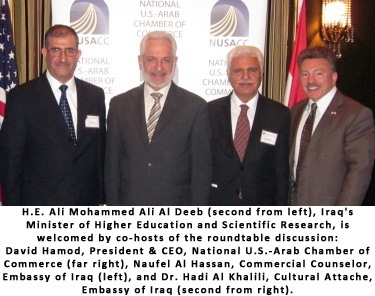 The National U.S.-Arab Chamber of Commerce (NUSACC) recently hosted H.E. Ali Mohammed Ali Al Deeb, Iraq's Minister of Higher Education and Scientific Research, during a ministerial visit designed to promote closer cooperation between universities in the Republic of Iraq and those in the United States.  In his first visit to America as Minister of Higher Education, His Excellency led a two-day conference involving 11 Iraqi university directors and almost 50 American universities.  He also participated in a business roundtable discussion that was co-hosted by NUSACC, the Iraqi Commercial Office, and the Iraqi Cultural Office at the Embassy of Iraq.

"Iraq is ramping up its institutions of higher learning, which involves forming partnerships with like-minded entities around the globe," said David Hamod, President and CEO of the U.S.-Arab Chamber.  "To prepare young Iraqis to serve their nation as professionals, a solid college education is vital.  America has some of the top colleges and universities in the world, and we are privileged that Iraq is looking to the United States to serve as one of its premier partners." 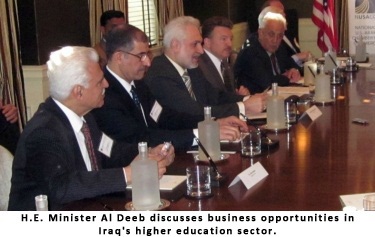 ​Minister Al Deeb, a graduate of the University of Baghdad and Mustansiriyah University, brings unique expertise to his position.  A former teacher of Social Studies at the Middle School level, he taught many classes pertaining to teaching methods and through his research, he literally helped to write the book on education curricula in Iraq.  As a result of persecution, he left the country in 1980 and returned only after the fall of Saddam Hussein.  Beginning in 2004, he served as Chairman of the Committee of Education and Higher Education in Iraq's National Assembly, and he served as a member of Iraq's Parliament during the period 2005-2010.  To his position as Minister of Higher Education and Scientific Research, he brings his skills as a researcher, scholar, policymaker, and practitioner of education from the ground up.

For more than 1,000 years, Iraq has been known as a center of knowledge.  But during the time of Saddam Hussein, the Iraqi higher education system experienced two decades of under-investment and isolation, creating a situation in which the educational infrastructure deteriorated and programs were of limited capacity in terms of planning, policy, and management of higher education programs.  This situation was exacerbated in the years after 2003, according to the UNESCO Office for Iraq, when more than 60 higher education buildings were damaged and over 100 college buildings were looted.  The damage was especially severe in laboratories, workshops and libraries.

It is against this backdrop that the Ministry of Higher Education and Scientific Research has embarked on an ambitious academic infrastructure initiative, begun in 2010, to create university cities that include classrooms, laboratories, housing for students and professors, world-class libraries, and teaching hospitals.

The Ministry is preparing a series of requests for proposal (RFPs) to be made available to world-class companies.  Submissions will be evaluated by international experts and Iraq's Ministry of Planning and, once approved, top companies will receive direct invitations from the Ministry of Higher Education and Scientific Research to implement these projects. 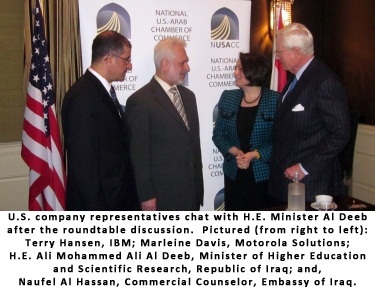 ​The Higher Education Ministry is looking for qualified companies from around the world to bring technology and expertise to Iraq to construct these academic cities.  Suggested Minister Al Deeb, "Iraqi universities are looking for those who will bring modern techniques to Iraq. We lack this expertise, so we will need the cooperation of international experts."

They are receiving that cooperation from a variety of sources.  The World Bank, for example, contributed $2.7 million for an Education Sector Technical Assistance Project. The U.S. Government, through the U.S.-Iraq Joint Coordinating Committee for Cultural and Educational Cooperation, is committed to strengthening ties between the Iraqi and American people through professional, educational, and cultural exchanges and dialogue. Fulbright fellowships, the International Visitor Leadership Program, the Iraqi Young Leaders' Exchange Program, and other initiatives bring hundreds of Iraqi scholars, students, youth, and professionals to the United States each year. Furthermore, seven university linkages have been finalized and are actively promoting academic collaboration.