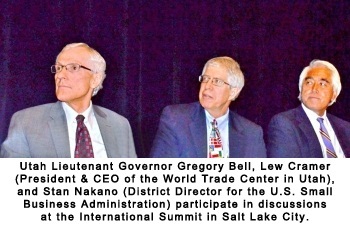 Over 250 business and government leaders convened this week in Salt Lake City to hear remarks from, and pose questions to, expert panels on assisting Utah's small businesses to expand into new international markets. Hosted by the Governor's Office of Economic Development (and its International Trade & Diplomacy Office), World Trade Center Utah, the U.S. Commercial Service, and the Small Business Administration, six panels addressed essential components of taking companies global. Utah's six Trade Representatives were all in attendance, including those responsible for Japan, South Korea, China, Belgium/the Netherlands/Luxembourg, Mexico, and Chile.

"The National U.S.-Arab Chamber of Commerce (NUSACC) was privileged to be part of this first-of-its-kind gathering in Salt Lake City," said David Hamod, the Chamber's President & CEO. "This is a reflection of Utah's growing outreach to global markets, particularly by small and medium-sized enterprises (SMEs)." NUSACC opened an office in Salt Lake City one year ago.

Utah good and services exports to the Arab world reached over $90 million dollars last year, leading the nation in five-year growth with an increase of 39.5 percent from 2010 to 2011. Utah's key exports are in primary metals manufacturing and computer & electronic products. Over $44 million in Utah exports went to the United Arab Emirates (UAE) last year, followed by $19 million in good and services sales to Saudi Arabia.
​
The panel on "Opportunities in the Middle East & North Africa" included: Ms. Cynthia Douglass, Business Development Manager for the National U.S.-Arab Chamber of Commerce (NUSACC); Mr. Franz Kolb, Director for Europe, the Middle East, Africa & India in the Governor's Office of Economic Development (GOED); and Ms. Rose Sager, Trade Representative for the Kingdom of Bahrain. 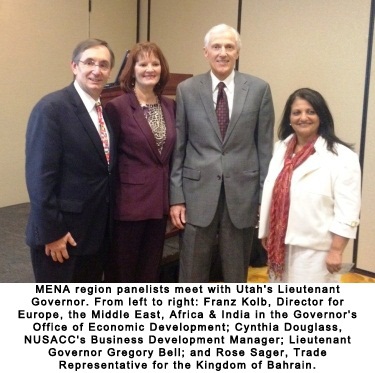 The panel was moderated by the GOED Director, Franz Kolb, who highlighted the increasing importance of economic relations between the Middle East and Utah, as well as the growing number of Middle Eastern countries that have emerged as significant markets for Utah companies. Panelists discussed the wide range of business opportunities available for Utah companies in the Middle East and North Africa (MENA), with a particular focus on infrastructure build-up, the economic benefits of working with trusted and fully vetted partners, and business incentives currently available for U.S. companies in the Kingdom of Bahrain.

According to the U.S. Department of Commerce, U.S. exports reached $2.1 trillion in 2011, the highest total value in U.S. history, and supported approximately 10 million American jobs. President Obama's National Export Initiative of 2010 called for doubling U.S. exports to $3.14 trillion by 2015 and, according to NUSACC research, MENA is one of the regions in which the United States is on track to achieve the goal of doubling exports. U.S. goods and services to the MENA market reached an all-time high of $84 billion in 2011, and they are projected to reach $167 billion by 2015.

"The Arab Spring has certainly caused economic slowdowns in certain MENA countries that have experienced large disruptions, such as those in Tunisia, Egypt, Syria, and Libya," Douglass noted. "However, it has also led to a new era of popular demands for transparency and economic reform, opening previously closed markets, particularly in North Africa. This is good news for American businesses."
​
Driving the demand for U.S. goods and services are infrastructure build-out, upstream energy development and downstream petrochemical projects, consumer spending, and defense spending. Many of the big-ticket infrastructure projects are concentrated in the Gulf Cooperation Council (GCC) nations, including: the GCC rail network, estimated at $11 billion, which will connect all emirates of the UAE, Oman, and Saudi Arabia; the Haramain Railway that will connect Mecca to Medina; the GCC electricity linkage project; the bridge being constructed between Qatar and Bahrain, which will be ready in time to serve visitors to the FIFA World Cup in Doha in 2022; and the Saudi-Egypt causeway, a 31-mile bridge estimated at $5 billion that will boost the ranks of Egyptian pilgrims to Mecca while simultaneously opening the door to Saudi families wishing to visit Egypt. 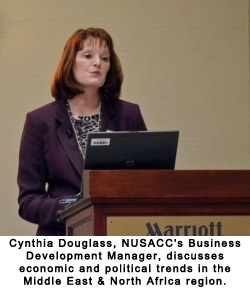 ​"Political changes in the Middle East and North Africa have created challenges for a number of countries in the short-term," concluded NUSACC's Cynthia Douglass, "but the winds of change in the region are also leading to unprecedented opportunities for U.S. businesses in the longer term. Utah is in a very strong position to continue leading the nation in export growth, and the MENA markets offer exceptional opportunities to do so."

Bahrain's Trade Representative, Rose Sager, spoke about the Kingdom's strength as a regional financial hub, which provides a sound, transparent financial regulatory system, and which is a member of the World Intellectual Property Organization. "Strategically located 'Business Friendly Bahrain' offers the best value within the region, with zero corporate taxes, 100 percent foreign ownership, low operating costs, and a well-educated, bilingual workforce," Sager noted. Bahrain was the first GCC nation to sign a Free Trade Agreement with the United States, providing very favorable treatment for goods and services manufactured in the United States. Bahrain also provides duty-free access to the other member nations of the Gulf Cooperation Council, which includes Kuwait, Oman, Qatar, Saudi Arabia, and the United Arab Emirates.
​
Sager concluded, "If any Utah company sets up a base, branch, or subsidiary in Bahrain, it would enjoy the same benefits as a Bahraini company, offering tax-free trade status within the entire GCC. Since the MENA market is forecasted to experience exponential growth within the next ten years, establishing a distribution center in Bahrain should result in a 'win-win' situation."
HOME | Privacy Policy | My Dashboard | About | Contact | Sitemap
Copyright © 2022, National U.S.-Arab Chamber of Commerce. All Rights Reserved