ITU SUMMIT AND "QITCOM" IN DOHA
HIGHLIGHT HOW NEW TECHNOLOGIES ARE
REVOLUTIONIZING LIFE IN THE ARAB WORLD
​
More Than 600 Tech Leaders, Including 8 Heads of
State and 25 Ministers, Explore ICT Opportunities 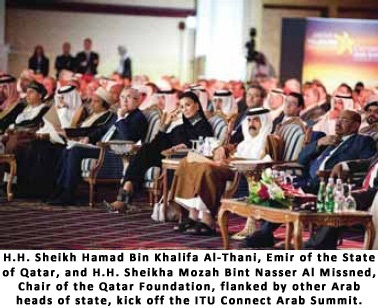 Two related events this week in Doha, Qatar highlighted the way that information and communications technologies (ICT) are rapidly reshaping communications, education, and business throughout the Middle East and North Africa (MENA) region.  With a goal of "connecting the unconnected by 2015," the International Telecommunications Union (ITU) held a three-day Connect Arab Summit that focused on connectivity as a vital indicator -- and driver -- of social and economic growth.  In concert with the ITU event, and organized by Qatar's Supreme Council of Information & Communication Technology (ictQATAR), was the QITCOM 2012 conference and exhibition, which brought together industry experts from all over the world to display their wares and to participate in panel discussions.

"These two events, one focused on governments and the other focused on the private sector, emphasized the increasingly important and ubiquitous role of ICT in everyday life," noted David Hamod, President & CEO of the National U.S.-Arab Chamber of Commerce, who traveled to Qatar for the meetings.  "The presence in Doha of so many ICT leaders from around the globe also sent a strong message about the State of Qatar's commitment to be a recognized leader in this sector."
​
The ITU's Connect Arab Summit attracted eight heads of state from the Arab world, 25 government ministers, and more than 600 industry leaders.  The event was opened by H.H. Sheikh Hamad bin Khalifa Al-Thani, Emir of the State of Qatar, who called for efforts to "bridge the knowledge, technological, and digital gap between Arab countries and developed countries" that have utilized technology "to become their most valuable source of income."  In the context of the Arab Spring, H.H. the Emir noted, Arab nations need to provide Internet access to all, build ICT infrastructure, and promote technological innovation to bridge gaps between and within Arab societies. 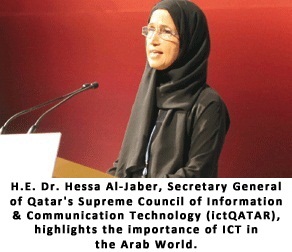 ​Dr. Hessa Al-Jaber, Secretary General of ictQATAR, opened the QITCOM conference and exhibition, noting that "ICT is a pillar of all mega-projects."  Large scale infrastructure projects have been a defining feature of Qatar's economic development in recent years, resulting in a construction boom that will carry the emirate to the World Cup in 2022 and beyond.

Dr. Hessa suggested that a commitment to sound ICT policies has led Qatar to the "threshold of further growth and prosperity" and that ICT is an integral part of three core principles in Doha: diversification -- consistent with her nation's National Development Strategy; collaboration -- locally and globally, to include public/private partnerships; and innovation -- where Qatar ranks 44th in the world, according to the World Economic Forum.  Innovation, Dr. Hessa said, plays a key role in fostering a nation's competitive advantages, research & development, and commercialization processes.
​
This perspective was reinforced by Dr. Hamadoun Touré, Secretary General of the ITU, who said in his opening remarks that a "truly global information society can only emerge out of a well-thought, multi-stakeholder-based approach . . . paving the way for facilitative cooperation, coordination, and collaboration."  Such collaboration will also help to mitigate disparities among nations, Dr. Touré suggested.  "ICT figures are healthy and skyrocketing in some countries, like here in Qatar," he said, yet there are "still many millions of people in the region without a mobile phone subscription or an Internet connection." 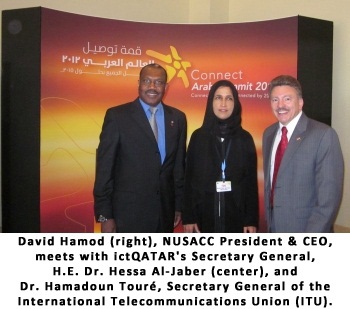 ​The solution to this problem, according to the ITU Secretary General, is broadband "because it will revolutionize the lives of everyone, everywhere. It will help deliver radical improvements in healthcare, education, transportation, utility suppliers, and government services -- in fact everything, all the time, and everywhere!"

"This region has great potential and provides great investment opportunities," noted Dr. Touré.  "I say this based on the fact that the region's fixed wired-broadband penetration is recorded at 2.2 percent with active mobile-broadband subscriptions remaining at 13 percent.  The good news is this: all the ingredients are in place for us to experience the same leap that we have seen with mobile-cellular growth."  According to the ITU, broadband penetration in the Americas is at 10.5 percent, and it has grown to 25.8 percent in Europe.
​
Approximately $46 billion in ICT investment opportunities were under consideration in Doha at the ITU summit and QITCOM.  Some of these opportunities revolve around mobile broadband, the subscriptions of which have grown from one percent to 13 percent in the region in the past five years.  There are also tremendous opportunities in content development.  According to Mohamed al-Tuwajri, Assistant Secretary General for Economic Affairs at the League of Arab States, digital content in Arabic makes up only 1.5 percent of total online content.  Or as the Director of ITU's Telecommunication Development Bureau noted, Arabic is the sixth most widely-spoken language in the world, yet it ranks just 113th of the 140 languages that are used online. 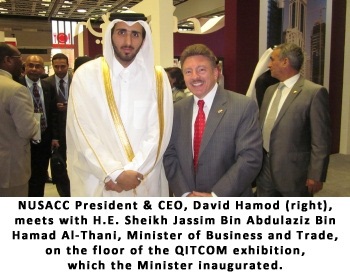 ​Recent ITU data found that one third of the world's population is using the Internet and that developing countries have increased their share of the world's Internet users from 44 percent in 2006 to 62 percent in 2011.  The same studies found that 45 percent of the world's Internet users are below the age of 25, yet in the developing world, 70 percent of the 1.9 billion people who constitute the community of under-25-year-olds are not online.  This represents a huge opportunity for business and government leaders who can provide connectivity.

Connect Arab Summit 2012 and QITCOM took place against a backdrop of widespread change throughout the Arab world, and the image of youthful, connected dissidents was one that surfaced time and again in the remarks of keynote speakers and panelists alike.  In fact, in an Innovation Theater session devoted to ICT and youth, polling showed overwhelmingly that young Arab men and women want a place at the table with the nation's decisionmakers.

Dr. Touré of the ITU put it this way: "If those youngsters don't find jobs in the next six months, there will be more revolutions."  And in his closing remarks at the Summit, Dr. Touré delivered a message that highlighted the importance of youth in the Arab world, who make up approximately two-thirds of the population.  He concluded, "The Arab region is a place that continues to be full of optimism, hope, vitality, youth and entrepreneurship."
​
In the words of the ITU: "The right to communicate is gaining ground day by day and becoming a reality.  However, it must be complemented by the opportunity to be educated and employable, the opportunity to access the job market and/or to create one's own enterprise, the opportunity to contribute to the development of the economy and wealth of the region, and to receive its associated fruits." 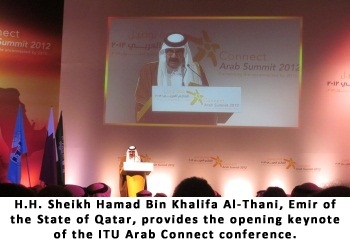 ​This is consistent with what sounded akin to an ITU mission statement for the Connect Arab Summit 2012, whose purpose was to "mobilize resources and engage all stake-holders in order to BUILD the Arab region's ICT Highway, to INNOVATE and open markets to local entrepreneurs, in particular the youth, and to EMPOWER all citizens of the Arab world through education, knowledge, and access to information."
"Both QITCOM and the ITU's Connect Arab Summit were amazing," said Ambassador David Gross, an international telecommunications expert and former U.S. Coordinator for International Communications and Information Policy at the U.S. Department of State (2001-2009).  "The ITU's Connect Arab Summit was a complete success both because of the very high level of participation by heads of state, ministers and many other senior officials, and because of the welcoming nature of the event for industry representatives.  At QITCOM, the wide and impressive scope of the exhibitions, as well as the high quality of the panel and keynote presentations, were extraordinary."

Ambassador Gross concluded, "I was especially impressed with the dynamic and innovative aspects of the many Arab-based companies and organizations that participated -- world class operations and people who are changing not only the region, but the world."
HOME | Privacy Policy | My Dashboard | About | Contact | Sitemap
Copyright © 2022, National U.S.-Arab Chamber of Commerce. All Rights Reserved