ARAB HIGH TECH ROAD SHOW
CONCLUDES IN WASHINGTON, D.C.
​
Under Secretary of Commerce Lauds
Road Show as a Very Effective Vehicle for
Promoting Trade and Investment and the
Transfer of Technology and Knowledge 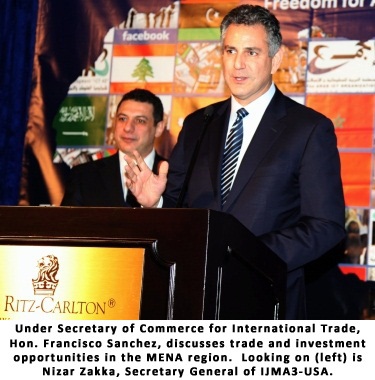 The High Tech Road Show, co-organized by the National U.S.-Arab Chamber of Commerce (NUSACC) and the Union of Arab ICT Associations (IJMA3-USA), concluded on Friday with a visit to Washington, DC.  The nation's capital was the third and final stop on a 10-day tour that also included Las Vegas (Nevada) and Silicon Valley (California).  The Washington DC portion of the Road Show was organized in association with the Northern Virginia Technology Council and TechAmerica.

"We are very privileged to host such an extraordinary delegation," said David Hamod, President & CEO of the U.S.-Arab Chamber.  "We are hopeful that when they return to the Middle East and North Africa (MENA) region, we will continue to work with them in support of innovative, entrepreneurial programs that will create jobs and economic growth here in the USA and throughout the Arab world."

Hamod's words echoed those of the Hon. Francisco Sanchez, Under Secretary of Commerce for International Trade, who characterized the High Tech Road Show as a "very effective vehicle for promoting trade and investment between the United States and the MENA region, as well as a catalyst for the transfer of technology and knowledge."  The Under Secretary went on to say that the National U.S.-Arab Chamber's "consistent support for entrepreneurial initiatives -- like the High Tech Road Show -- strengthens the commercial bridge between America and the Arab world."

While earlier stops on this year's High Tech Road Show focused largely on business-to-business opportunities, the visit to Washington DC concentrated primarily on U.S. Government resources and initiatives available to enhance the role of Information and Communications Technologies (ICT) in the Arab world, especially through greater broadband access and more effective regulation.

The Washington visit began with a roundtable discussion, moderated by Marilyn Cade, Chair of Internet Governance and Online Services at TechAmerica, on strengthening economic and social growth in the Arab region through ICT.  The roundtable involved a number of senior officials, including H.E. Mohammed Allawi, the Iraqi Telecommunications Minister, and Ambassador Michael Gardner, Chairman of the U.S. Telecommunications Training Institute.  During the roundtable, participants discussed the Arab world's important ICT gains, including the growth of social media and the rise in Arabic content, but they acknowledged a need for greater cooperation in ICT policy development at a regional level.

Joining the High Tech Road Show delegates in Washington was a delegation of senior business leaders from the Hashemite Kingdom of Jordan, who were accompanying H.M. King Abdullah II to Washington DC.  Delegates included some of Jordan's leading advocates for economic growth through entrepreneurial innovation, including H.E. Karim Kawar, Chairman of the EDAMA Initiative (www.edama.jo), H.E. Mohammed Bataineh, Chairman of the American Chamber of Commerce in Jordan (www.amcham.jo), and Mr. Usama Fayyad, Chairman of Oasis 500 (www.oasis500.com). 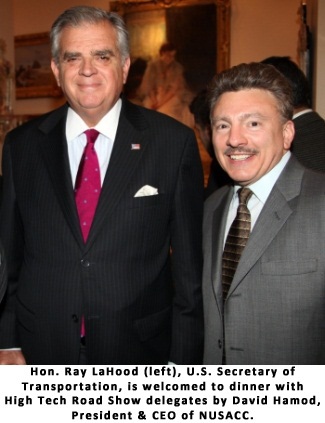 ​In a visit to the U.S. Department of State, delegates met with a number of senior officials, including Hon. Jeffrey Feltman, Assistant Secretary of State for Near Eastern Affairs, and Hon. Philip Verveer, United States Coordinator for International Communications & Information Policy.

These meetings, noted Ambassador Verveer, "have enabled officials of the State Department, Commerce Department, and FCC to meet and hear the perspectives of senior government officials and corporate leaders from the Middle East and North Africa.  The exchanges have produced insights about important matters of mutual interest that otherwise would have been unavailable.  We look forward to similar opportunities in the future."

Delegates also participated in a roundtable discussion at the U.S. Trade and Development Agency (USTDA), an agency of the U.S. Government that assists host country economic development through infrastructure projects, market-oriented reform, job creation, training, and the transfer of advanced technology.  Led by Carl Kress, Regional Director for the MENA region and Europe, the session highlighted a range of resources available through the U.S. Department of Commerce, the Overseas Private Investment Corporation (OPIC), and the International Executive Service Corps (IESC).


The events of Thursday concluded with a VIP reception at the Guarisco Gallery of fine art and a gala dinner at the Ritz-Carlton Hotel.  Among the special guests that evening were the Hon. Ray LaHood, U.S. Secretary of Transportation, the Hon. Francisco Sanchez, Under Secretary of Commerce for International Trade, and more than 40 High Tech Road Show delegates from 13 Arab nations.

*          *          *
​
Friday, the final day of the High Tech Road Show, revolved around a day-long conference at the Four Seasons Hotel entitled, "The Arab World After the Arab Spring: Opening to IT Freedom and Investment."  The morning keynote speech was delivered by Alec Ross, Senior Advisor for Innovation to U.S. Secretary of State Hillary Clinton. 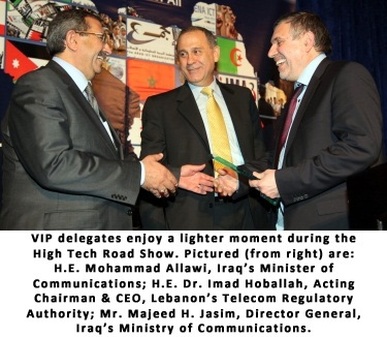 ​Ross is in charge of developing the concept of 21st Century Statecraft, using communication technologies and social networks to help governments connect with their constituents and help build leadership.  He is also spearheading Civil Society 2.0, a program to train grassroots organizations around the globe in how to use Web sites, text messaging campaigns, and other new tools to reach out to their respective communities.  In that capacity, Ross has been actively involved in monitoring Arab Spring developments on behalf of the Obama Administration.

The penultimate keynote address was delivered by David Hamod, President & CEO of NUSACC, and was focused on trade and investment opportunities in the context of the Arab Spring.  Hamod said he is generally optimistic about the MENA region, where total market demand is expected to approach one trillion dollars by the end of 2013.

The Chamber President offered five "prescriptions" to Arab governments for economic growth during the Arab Spring: 1) Invest in the private sector to create productive jobs and to speed the transition from hydrocarbon-based economies to knowledge-based economies; 2) Overhaul legal structures to make laws more business-friendly, less bureaucratic, and geared to attract investment that will lead to economic growth; 3) Strike a balance between the "have" nations of the region and the "have not" nations because, whether we like it or not, the experience of the Arab Spring has taught us that the MENA region is interconnected from one end to the other; 4) Listen to the youth, including young women, because they represent the region's future leadership; 5) Tap into the Arab-American community, a remarkable resource for transferring expertise and technology from the "new world" to the "old country."
​
The final keynote speaker was Jim LeBlanc, Chairman of the Northern Virginia Technology Council, who counseled High Tech Road Show delegates to develop a market strategy to gain more U.S. business that is sustainable over the long term.  Social media cannot replace face-to-face interaction, he said, encouraging delegates to consider appointing a U.S. representative to their Boards of Directors or to establish a U.S. Advisory Board to maintain a constant flow of advice for developing opportunities with American firms.  In this regard, LeBlanc said, business associations and industry groups can also play a key role in helping to position Arab firms in the United States. 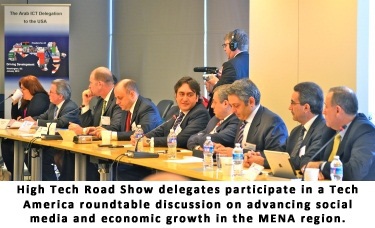 ​"You all have a good story to tell," LeBlanc suggested, about the "growing vibrancy in the use and development of new technologies and services and the growing potential business opportunities in your respective regions... But in much of the United States there continues to be misperceptions, misunderstandings, apprehension, and confusion as to what is really happening in many of your countries."  He concluded, "The time has come for more attention to be paid to the Arab world and its technological, economic, and business opportunities."

As if to underscore LeBlanc's point, Dr. Imad Hoballah, Chairman and CEO of Lebanon's Telecommunications Regulatory Authority, noted, "I look forward to continuing the relationships that I was able to establish and to build on the professionalism of the Chamber and its members in coming years."  He continued, "Our team opened clear communications channels, started new friendships, and exchanged new business ideas that will undoubtedly have major positive effects on the ICT business in the Arab world.  This visit has been a great success for me and for the whole group of executives who participated in the Road Show."

Nizar Zakka, Secretary General of IJMA3-USA, affirmed that view: "The level of cooperation and interest from both sides -- Arab and American -- show the enormous demand for events of this kind.  The ICT sector is ready for increased trade and investment and ready for the shared policies needed to facilitate that."

"Beyond the immediate partnership and investment opportunities that the Road Show provides," he concluded, "the diversity of nationalities among the delegates may serve to highlight the potential for a longer-term commitment to U.S.-Arab ICT sector collaboration.  The presence of such a large ICT delegation demonstrates that the relationship between the U.S. and the Middle East is not solely based on partnerships between governments and that dramatic strides can be made through private sector efforts."
HOME | Privacy Policy | My Dashboard | About | Contact | Sitemap
​Due to COVID-19,  and in the interest of public safety, walk-in service at NUSACC is temporarily suspended. Because our clients deserve the best possible service, certification services will continue to be offered by MAIL.