U.S.-ARAB CHAMBER OF COMMERCE
LAUNCHES "GREENFIELD" TRADE &
INVESTMENT MISSION TO LIBYA AND TUNISIA
​
Delegation is Composed of 13 Companies,
Which Generated Over $250 Billion Last Year,
Representing 10 Different States
In Tripoli, U.S.-Arab Chamber States, "The American
People Believe in the Libyan People. We Are
Dedicated to the Success of the New Libya." 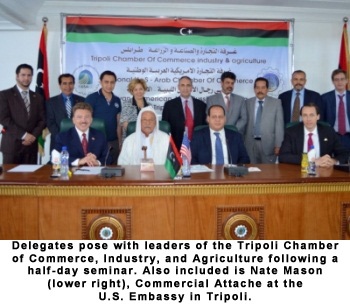 The National U.S.-Arab Chamber of Commerce (NUSACC) today began a nine-day "greenfield" trade & investment mission to Libya and Tunisia. The executive-level delegation is the first U.S. business delegation to visit Libya and Tunisia since their respective revolutions this past year -- which have played a pivotal role in spreading Arab Spring demonstrations throughout the Middle East and North Africa (MENA) region.

This is the fourth trade and investment mission that the U.S.-Arab Chamber of Commerce has brought to Libya in recent years. The delegation is composed of 13 companies, generating over $250 billion in revenues last year, with delegates representing 10 different states -- stretching from the State of Washington on the West Coast to Connecticut and Florida on the East Coast.

Senior officials of the National U.S.-Arab Chamber of Commerce have made more trips to Libya (eight) -- and brought more U.S. companies to Libya (nearly 100) -- than any other American business entity. Each visit has been undertaken in partnership with the Tripoli Chamber of Commerce, Industry & Agriculture (TCCIA), as well as the General Union of Libyan Chambers of Commerce. 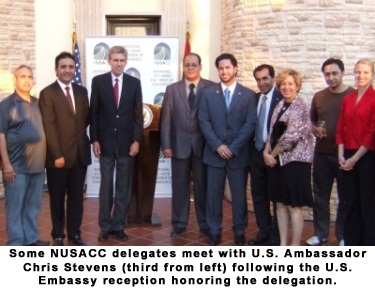 "Libya and Tunisia represent important greenfield markets for U.S. companies, which are in great demand here for their ability to transfer technology and knowledge," stated David Hamod, President & CEO of the National U.S.-Arab Chamber of Commerce. "The interest of Libyan companies to do business with U.S. firms is extraordinary and unprecedented."
​
In Libya, there is deep appreciation for U.S. efforts to liberate the country from the old regime, and American companies are hopeful that this goodwill may translate into business opportunities. According to the U.S. Ambassador to Libya, Hon. J. Christopher Stevens, "The National U.S.-Arab Chamber of Commerce delegation was warmly welcomed by Libyan business people, who are eager to engage American businesses in a wide variety of sectors." 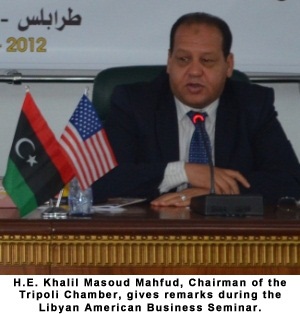 ​The NUSACC delegation is the first American business group to come to the region since Ambassador Stevens took up his new post in Tripoli last month. The U.S. diplomat hosted a welcome reception at his residence for the delegates and a large group of Libyan businessmen and women.

As front-line nations in the Arab Spring, Libya and Tunisia have seen sweeping changes in the past year. Both countries are in the throes of replacing decades of corruption and mismanagement with economic reform and sound governance. This process will take time, but Libya and Tunisia have made impressive strides in recent months.
​
Not long ago, the Hon. Leon Panetta, Defense Secretary of the United States, pledged to the Libyan people: "I have every confidence that you will succeed in realizing the dream of a government of, by, and for all people and to achieve a more secure and prosperous future." 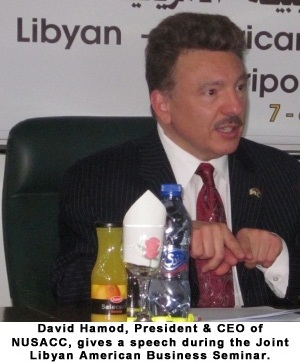 ​​NUSACC's trip to Libya is tied closely to the visit to Washington DC this week by H.E. Dr. Mustafa Abushagur, Libya's Deputy Prime Minister, who was hosted by the National U.S.-Arab Chamber of Commerce at a luncheon for more than 150 business and government leaders.

In the same spirit, a high-level visit to Washington DC by the Tripoli Chamber of Commerce took place earlier this year in connection with a visit there by H.E. Abdurrahim El-Keib, Prime Minister of Libya. During that visit by the Tripoli Chamber, its Chairman, H.E. Khalil Masoud Mahfud, signed a historic Memorandum of Understanding (MOU) with the National U.S.-Arab Chamber of Commerce.
​
The MOU established a new Libya-U.S. Joint Business Council to provide a framework for strengthening economic relations between Libya and the United States. It also affirms that chambers of commerce play a very important role in promoting free enterprise, economic growth, job creation, and a better quality of life. 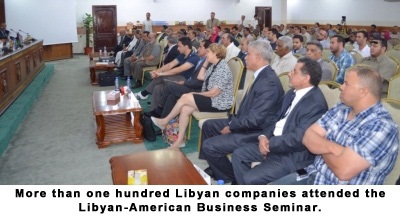 ​Today in Tripoli, a half-day business seminar co-organized by the Tripoli Chamber and NUSACC drew more than 100 top Libyan companies looking to do business with partners in the United States. At that event, David Hamod of the U.S.-Arab Chamber noted that the partnership between the two chambers has been "forged over the years by genuine friendship, shared values, and mutual respect. Today, we continue down that path -- hand in hand -- to provide the highest level of service to tens of thousands of stakeholders in Libya and the United States."
​
The NUSACC delegation's visit to Tripoli, Hamod concluded, sends a clear message: "U.S. business believes in Libya. The American people believe in the Libyan people. We are committed to you, and we are dedicated to the success of the new Libya."
HOME | Privacy Policy | My Dashboard | About | Contact | Sitemap
Copyright © 2022, National U.S.-Arab Chamber of Commerce. All Rights Reserved