​Delegates in the National U.S.-Arab Chamber of Commerce (NUSACC) "greenfield" trade mission held meetings this week with business leaders and senior government officials in three cities in Libya: Tripoli, Misurata, and Benghazi. All three cities were involved in heavy fighting in the war to liberate Libya last year, and these communities are now on the road to recovery. 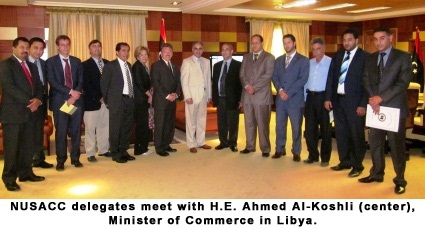 "The reconstruction period is marked by a vibrancy and urgency that I've never experienced in Libya before," said David Hamod, President & CEO of the U.S.-Arab Chamber. "The Libyan people are hungry for the freedoms and quality of life that they were denied for more than 40 years, and they are obviously anxious to make up for lost time."

This commitment to move forward quickly, yet deliberately, is reflected in the comments of H.E. Ahmed Al-Koshli, Libya's Commerce Minister, who hosted the NUSACC delegation. "The 42 years of Libya's closed market and corruption are over, and today we are building a bright and promising future," he said. "We are looking forward to a free and transparent Libya, one with a strong judicial system and a firm commitment to the rule of law."

Minister Al-Koshli continued, "We are in a transition period, and soon our new government will be in place to improve many laws and regulations related to foreign investment." But in the meantime, he noted, "We encourage companies to begin engaging today, not tomorrow. We want you to build the new Libya with us from the outset, where opportunities are greatest."
​
Largely closed to the outside world for decades, Libya is preparing for the largest economic expansion in its history. Demand for U.S. goods and services, pent up since the 1970s, is now booming. The country is still dealing with a certain amount of instability, but this is expected to decline after national elections, and opportunities are ripe for American companies. 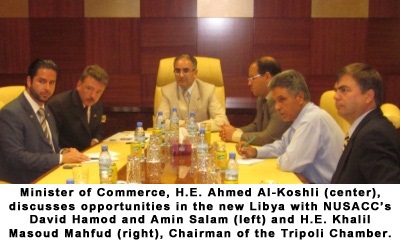 ​Much of this economic activity will be underpinned by expansion in the oil & gas sector, which is the single largest driver of Libya's economy. The country is well on its way to reach pre-conflict levels of oil production, and energy revenues will help to fuel wide-ranging development and investment projects.
In a meeting with Libya's Deputy Minister for Electricity, H.E. Dr. Mohamed Ali Ekhlat, NUSACC delegates were told that the ministry needs to contend with eight percent annual growth in electricity demand. Government subsidies have kept the price of electricity artificially low for decades, he said, and market prices for energy are likely to come as a shock for most Libyan consumers.

Power generation and transmission are a challenge for the 40,000 employees of the General Electricity Company of Libya (GECOL), he said. There are plans to introduce independent power production (IPP), he suggested, but Libya's laws need to be overhauled in order to accommodate such public-private partnerships (PPPs).
​
Renewable energy is also a priority, especially wind and solar, he said, and Libya actively welcomes American partners who can encourage research & development (R&D) in this sector through the country's universities. 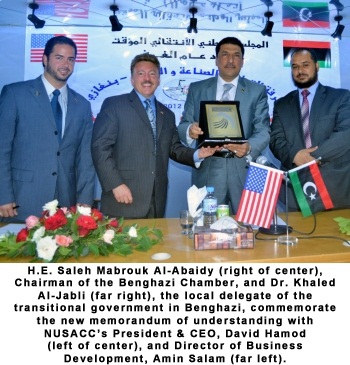 ​Emily Berlin, a delegation member and Senior Managing Director of Energy International, a power generation company based in Florida, noted, "Energy International is pleased to have joined the NUSACC trade mission to Libya. We are so impressed with the spirit of the Libyan people and with their dedication to moving their country into a bright new future. We hope to participate in the development of a new Libyan economy."

Feeding Libya's burgeoning population is also a priority for Libya's new government, in part because food prices were heavily subsidized -- and replete with corruption -- during the old regime. According to the U.S. Department of Commerce, Libya currently imports 75 percent of its food from other countries, providing strong incentives for Libya to develop its agricultural infrastructure. It also creates opportunities for U.S. exporters of foodstuffs.

Maruf Muminov, a delegation member and Vice President of United Trading, based in Maryland, said, "Libya, with its fast emerging economy, offers tremendous opportunities for quality food products, and we are eager to build lasting relationships with that nation. Our company, United Trading, is very well positioned to bring great American food to the Libyan market."

The Organization for the Development of Administration Centers (ODAC), part of the Libyan Government, is the country's largest developer and implementer of projects. In a visit to ODAC's offices, delegates were told that ODAC is currently overseeing nearly $50 billion in projects, with a special emphasis on residential developments ($25 billion) and educational institutions, including 24 new campuses (valued at $10 billion). Nearly $3 billion has been set aside for hospitals, which includes upgrading 35 existing facilities and constructing 18 new facilities.

David Muirhead, a delegation member and Project Director of Morganti, a construction firm based in Connecticut, noted, "We had the opportunity to share some technology transfer and training success stories with our counterparts in Libya . . . which will help our corporate planning to prepare for a smooth and productive mobilization to this strategic location in North Africa. Morganti Group looks forward to proceeding with new projects in this challenging, but promising market." 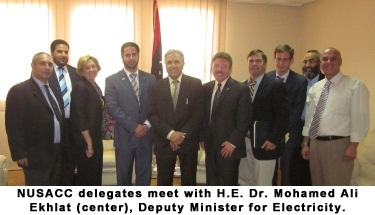 At that ceremony, NUSACC's David Hamod stated, "The American people, like the people of Libya, had to fight for our independence and freedom. It wasn't easy, and we lost many lives. But in the end, fighting for our freedom helped the United States to become a great nation, just as Libya has the opportunity now to become a great nation."

Benghazi initiated the fight to bring down the old regime, and it was the first city in Libya to be liberated.

The coastal city of Misurata also saw extensive fighting, with thousands of missiles falling on the city over a 12-week period. NUSACC delegates were hosted in Misurata by the local chamber of commerce and its President, H.E. Mohamed Raied, who runs the largest dairy products company in North Africa. President Raied took delegates on a tour of his production facility, which makes extensive use of U.S. products.

NUSACC's Libyan partners -- the chambers of commerce in Tripoli, Benghazi, and Misurata -- made sure that trade mission delegates came away with an appreciation for Libya's history and traditions. Delegation members spent a morning at Leptis Magna, the extraordinary ruins founded on the Mediterranean at the beginning of the first millennium BC and one of ancient Rome's most prized assets in North Africa. Delegates also visited the Wadi Al-Kuf Gorge, nearly 500 feet deep, in Eastern Libya's picturesque Green Mountains. Delegates even made time to participate in a traditional Libyan wedding ceremony. 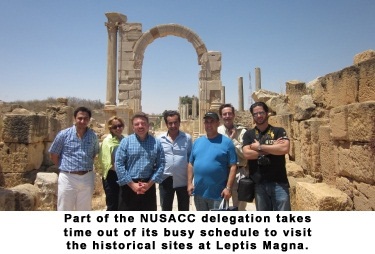 ​Since the easing of U.S. sanctions in 2004, U.S. exports to Libya jumped from $39 million to $665 million in 2010, an increase of 1,605 percent. The top U.S. export in 2011 was food products, with sales of over $150 million, followed by transportation equipment, machinery, agriculture, and electronic products. According to a NUSACC study that will be released soon, U.S. exports to Libya are slated to grow to $2.14 billion by the year 2015.

Peter Semler, a delegate and Chairman of Safe Harbor Global, a business media company, summed up the opportunities for U.S. companies this way: "Libya probably represents the greatest market for transformational growth since the fall of the Soviet Union. Libya, with its neighbors Tunisia and Algeria, will be a driver of growth for America and the rest of the world, starting with infrastructure."
​
Libya's Commerce Minister, H.E. Ahmed Al-Koshli, seems to concur. "Libya will be a gateway to the Middle East and Africa, and we want American companies to put their regional headquarters in Libya," he told NUSACC delegates. Contrary to popular belief, he suggested, "Libya is not just an oil field. This nation has so much to offer including, but limited to, agriculture, tourism, industry, and healthcare. We have many prominent historic sites in Libya, and such sites can create unparalleled opportunities for development and investment."
Minister Al-Koshli concluded, "We want small and medium-sized enterprises (SMEs) to be a main component of our future economic success and development. We look forward to American companies investing with us and training our SMEs so that they will have all the tools, technology transfer, and know-how to grow."
HOME | Privacy Policy | My Dashboard | About | Contact | Sitemap
Copyright © 2022, National U.S.-Arab Chamber of Commerce. All Rights Reserved