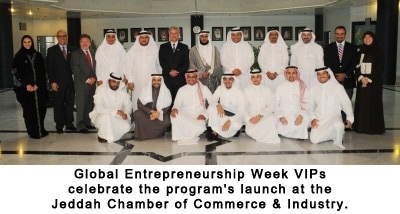 The National U.S.-Arab Chamber of Commerce (NUSACC) this week helped to launch Global Entrepreneurship Week (GEW) in the Kingdom of Saudi Arabia. In a launch ceremony in Jeddah organized in association with Kansas City-based Ewing Marion Kauffman Foundation, Saudi Arabia became the most recent nation in the Arab world to join a worldwide entrepreneurship program that connects more than 30,000 partners in 130 nations.

"NUSACC is proud to be part of this initiative to promote start-up businesses all around the globe, and we are privileged to support this launch event in Jeddah," said David Hamod, President & CEO of the Chamber. "Encouraging entrepreneurs and the new jobs that they create is an increasingly important priority for nations worldwide, and we commend the Kingdom of Saudi Arabia for its leadership in this initiative."
​
Guest speakers at the launch event included: H.E. Abdullah Alhaqbani, Deputy Minister of Labor for Planning and Development; Dr. Abdulaziz Abdulaziz, General Secretary of the Small and Medium Enterprises Support Program at the Ministry of Labor; Jonathan Ortmans, Senior Fellow at the Kauffman Foundation; and David Hamod, President & CEO at NUSACC. The launch was organized by Qotuf, a non-governmental organization, in cooperation with the Jeddah Chamber of Commerce & Industry and the Ministries of Labor and Commerce. 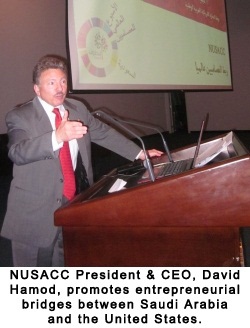 She concluded, "We are grateful that NUSACC was there to observe our first board meeting and launch event, and we are looking forward to weaving NUSACC resources together with our future plans."

A high percentage of Saudi Arabia's population is youth, and the Kingdom is looking for ways to create productive employment for this growing segment of Saudi society. An important part of this effort is to lessen dependence on government jobs and to create incentives to launch private sector ventures.

This was highlighted by Dr. Abdulaziz, head of SMEs at the Ministry of Labor, in his remarks at the launch event. He identified seven initiatives that Saudi Arabia is undertaking to expand the entrepreneurial ecosystem in the Kingdom:

* Accelerators -- Identifying accelerators to offer guidance and invest in new ventures that will be carried out by the entrepreneurs themselves.
* Associations -- Developing cooperative entities that will assist start-ups with such business essentials as insurance, retirement plans, best practices, and so on.
* Education and Inspiration -- Raising awareness throughout the Kingdom about opportunities to start one's own business.
* Access to the Market - Assisting with market entry, locally and internationally. 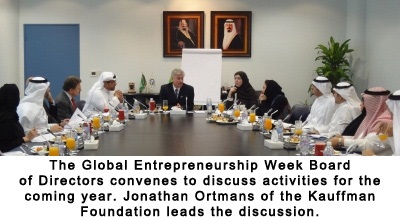 ​* SME Financing -- Providing access to finance through a nationwide initiative that focuses on the private sector rather than the government.
* Regulation Reengineering -- Streamlining government offices to cut bureaucratic red tape and to make them more conducive for new businesses.
* Unified Portal -- Creating an electronic portal that provides access to key processes for start-ups, including but not limited to registrations, licensing, and diagnostic tools.

Jonathan Ortmans of the Kauffman Foundation, the driving force behind the Global Entrepreneurship Week, noted that entrepreneurship "represents the possibilities of human endeavor" and an opportunity for "birthing the new." He suggested that Saudi Arabia is part of a global grass-roots movement, a "renaissance of startup communities that are erupting all over the world." Now is an exciting time to consider entrepreneurship as part of one's career path, he said, offering opportunities to create jobs, make the world a better place and, of course, increase one's own net worth.

Ortmans noted that according to a recent Kauffman Foundation study, all of the new net jobs created in the United States in recent years have come from companies less than five years old. With this in mind, he said, GEW "marks the beginning of another celebration of the new and young firms that are fundamental for sustainable growth and stability, not just in the United States but around the world. This new generation of startups is unleashing ideas through the marketplace that not only create wealth, but solve challenges and improve our daily lives."
​
David Hamod of the U.S.-Arab Chamber focused his remarks on building bridges of entrepreneurship between Saudi Arabia and the Arab-American business community. "Americans of Arab descent are one of the United States' most successful ethnic communities by almost any measure," he noted, "and I believe that there may be no better partner for your entrepreneurs -- for technology transfer, for knowledge transfer, for investment opportunities, or for commercial cooperation in general." 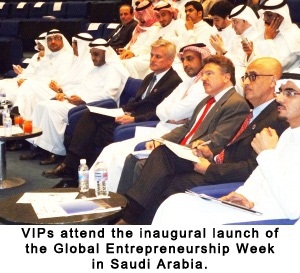 Hamod highlighted an array of successful Arab-American start-ups in office solutions, hair-care and spa products, money management, professional basketball, medical technologies, and humanitarian service. He also alluded to "perhaps the most famous entrepreneur of them all," Steve Jobs, who was of Syrian descent and who dropped out of school to launch a company in a garage that went on to become Apple.

"I told you these stories because I want to emphasize that Americans of Arab descent are here to serve as partners and as a resource for our fellow entrepreneurs in Saudi Arabia," Hamod concluded. "We made plenty of mistakes along the way, and there is no reason why you should have to make the same mistakes."
​
Global Entrepreneurship Week, according to the Kauffman Foundation, is the world's largest celebration of the innovators and job creators who launch startups that bring ideas to life, drive economic growth, and expand human welfare. During one week each November, thousands of events and competitions around the world inspire millions to engage in entrepreneurial activity while connecting them to potential collaborators, mentors and investors. Now in its fifth year, Global Entrepreneurship Week has expanded to 130 countries -- empowering nearly 20 million people through 125,000 activities.
HOME | Privacy Policy | My Dashboard | About | Contact | Sitemap
Copyright © 2022, National U.S.-Arab Chamber of Commerce. All Rights Reserved