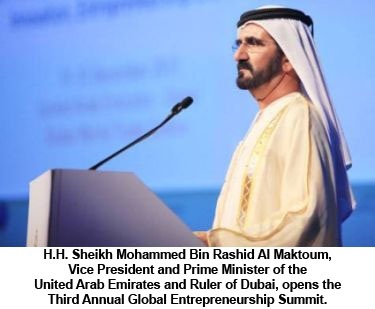 The third Global Entrepreneurship Summit (GES) has just drawn to a close in Dubai, United Arab Emirates. The two-day event attracted over 1,000 delegates from around the world, including high-level representation from the U.S. Government and private sector leaders from more than 50 countries. The National U.S.-Arab Chamber of Commerce (NUSACC) played a supporting role in the summit meeting and was represented by its Co-Chair, Dr. Ghassan Ahmed Al Sulaiman of Saudi Arabia, and its President & CEO, David Hamod.

"Our Chamber congratulates Dubai and the entire United Arab Emirates for hosting this highly successful gathering," noted NUSACC's David Hamod in Dubai. "As they have done so many times before, Dubai and the UAE have once again raised the bar, setting a high standard for the rest of the world."

This is the third such gathering, following earlier summits in Washington DC and Istanbul, Turkey in 2010 and 2011, respectively. Dubai used the two-day event as an opportunity to showcase its rapid economic development, its "open door" policy to visitors from around the world, and its bid to host World Expo 2020. (Under the banner of "Connecting Minds, Creating the Future," Dubai is proposing to host the World Expo in the Middle East for the first time.)

H.H. Sheikh Mohammed Bin Rashid Al Maktoum -- Vice President and Prime Minister of the UAE and Ruler of Dubai -- launched the summit. The Emirates are "partners with all countries of the world in order to fulfill our responsibilities to create an attractive environment for creativity, an environment that will attract young innovators across the Arab nation and the world at large," said Sheikh Mohammed. "Leadership is one of the main pillars that shape the Emirati identity. Leadership is not a new concept in our Arab region."
​
He continued, "In the United Arab Emirates, we overcame poverty and illiteracy because we have confidence in ourselves and in our citizens, who have turned the desert into a modern state in the world." Sheikh Mohammed then connected the UAE's successes to the historic achievements of the Arab and Muslim worlds. "The greatest achievement of the Islamic civilization is openness and the globalization of culture, science and knowledge," he noted. "Our civilization adopted knowledge from different civilizations, as well as spreading our own . . . . We invented the alphabet and many branches of science, such as Algebra and mathematics. We, the Arabs, founded the first university in history, from which people of learning graduated in medicine, astronomy and mathematics." 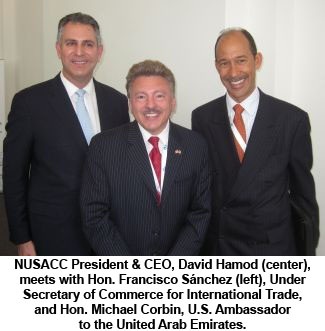 The President of the United States, Hon. Barack Obama, offered videotaped remarks at the launch of the summit. He said, "Since the first summit I hosted in Washington, we've made real progress. Training thousands of aspiring entrepreneurs with the skills they need to create new start-ups, helping small businesses expand and hire more workers, mobilizing new investments and expanding access to capital, empowering people (especially women and girls) in science and technology, and increasing exchange programs for our young people, the entrepreneurs of tomorrow."

He continued, "This work is even more important, given the extraordinary changes across the Middle East & North Africa. People are not only seeking the chance to forge their own future; they're seeking the same jobs and prosperity enjoyed by people around the world. And just as democratic revolutions can be triggered by a lack of opportunity, democratic progress will depend on economic growth that is broad and sustained, and that demands entrepreneurs."

President Obama said, "It's fitting that you meet in Dubai, a city that speaks to what's possible when people with vision and imagination can pursue their dreams." He concluded, "Here in Dubai, let's keep creating the next generation of dreamers, creators, and builders. Let's close the skills gap with education that truly prepares our children for the jobs of the future. Let's help entrepreneurs harness the latest technology to build new networks of cooperation. Let's make it even easier to access capital. In short, let's keep doing everything we can to help that aspiring entrepreneur turn her idea into a business that could change her neighborhood, her city, or her country."

"All of us in the Arab world have to encourage the role of young people in the business sector, and we have to realize that this generation is capable of launching projects that would change economic and social spectra in the Arab world, based on state-of-the-art technologies and the openness of knowledge," said H.E. Sheikh Abdullah Bin Zayed Al Nahyan, Foreign Minister of the UAE, who also offered remarks at the launch. "We must support and promote advanced policies, stimulate the role of the youth, and facilitate involvement in economic and investment affairs to achieve their dreams and aspirations."
​
Senior representatives of the U.S. Government attending the summit included Hon. Francisco Sánchez, Under Secretary of Commerce for International Trade, Hon. Thomas Nides, Deputy Secretary of State for Management and Resources, and Hon. Michael Corbin, U.S. Ambassador to the United Arab Emirates. 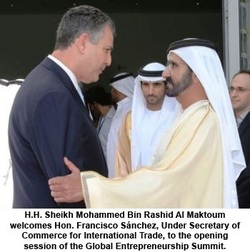 Under Secretary Sánchez highlighted the importance of entrepreneurship to economic growth. He said, "As you all know, roughly 50 to 100 million new jobs are needed in this region. Our partnerships will never reach their full potential if so many people are finding it difficult to find work and escape poverty. So we must address this challenge."

"One essential component of the solution is new startups," he noted. "That's because the startups of today will become the big companies of tomorrow. We fully support this growing prosperity, both here and across the Middle East . . . because when a young person has an idea, they need to be able to pursue that idea. And if they are able to turn that idea into a business, then workers will be hired. A MENA region that is economically stable is an important pillar of President Obama's approach."

Deputy Secretary of State Nides noted that entrepreneurship is "about the human drive to do something new and different. It keeps our societies vital and resilient. Anyone with a good idea and the willingness to work hard can improve the way we live -- and make some money to boot." Moreover, he said, the "biggest challenges facing our world today can only be solved with widespread innovation."

"All around the world," Nides continued, "stability and economic opportunity go hand-in-hand. The recent democratic transitions in this region reaffirm the importance of broad-based economic advancement for all of a country's citizens. And nothing creates new opportunities like entrepreneurship . . . We can't hold the line on youth unemployment, much less improve it, without a laser-sharp focus on entrepreneurship."

Finally, he concluded, "Entrepreneurs can't just go it alone. They need a business and regulatory environment that encourages them to take risks and understands that failure is just part of the process. They need open, free, and fair policies that don't play favorites -- and that protect intellectual property and provide legal certainty. These are critical elements to increase investor confidence and jumpstart growth in any country."

The Summit showcased scores of entrepreneurial success stories and a number of regional entrepreneurship initiatives, including but not limited to the Arabia Fast Growth 500, Oasis 500, and Injaz. The gathering also served to highlight some of the programs in the UAE that are helping to promote successful startups, like Dubai SME and the Khalifa Fund for Enterprise Development. 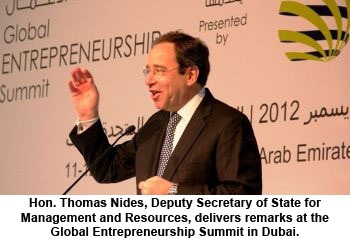 Several Memorandums of Understanding (MOUs) were signed during the summit, including a partnership agreement between the UAE Government and the Higher Colleges of Technology (HCT) that was signed by UAE Minister of Higher Education and Scientific Research, H.E. Sheikh Nahyan bin Mubarak Al Nahyan, and UAE Minister for Cabinet Affairs, H.E. Mohammed Abdullah Al Gergawi. The MOU kicks off an integrated entrepreneurship initiative consistent with the UAE Vision 2021, which calls for inclusion of entrepreneurship programs into academic curricula.

Another MOU was signed by the Higher Colleges of Technology, the Khalifa Fund for Enterprise Development, and Dubai SME, the agency of the Department of Economic Development that has responsibility for encouraging small and medium-sized enterprises (SMEs) and fostering entrepreneurship in the UAE.

The Global Summit, which had a distinctly Middle Eastern feel to it, accentuated the fact that the Arab nations represent one of the fastest growing regions in the world for entrepreneurship activity. This may be especially true since the advent of the Arab Spring, now two years old, which has created a greater sense of urgency among policymakers and entrepreneurs alike to create productive jobs that will strengthen local economies. According to the World Bank, Arab nations will need to create 100 million new jobs by the year 2020 to sustain requisite economic growth.

The so-called "youth bulge" in the Arab world is helping to drive entrepreneurial initiatives. According to the International Labor Organization, half of the region's population is under 25 years old and 26.4 percent are unemployed. The ILO predicts that youth unemployment rates in the region will rise to 28.4 percent in 2017.

A report last year by Silatech and Gallup noted that the greatest problems for young entrepreneurs in high-income Arab countries tend to revolve around stifling government regulations. The UAE is tackling this issue head-on.

UAE entrepreneurs rank highest among 54 countries in terms of exporting activities, said Dr. Constance Van Horne, professor at Zayed University, quoting from the 2011 Global Entrepreneurship Monitor (GEM) global report. Van Horne spoke at a recent Tamakkan seminar on "The Changing Landscape of Entrepreneurship in the UAE," which explored the opportunities, challenges and outlooks for SMEs in the nation. 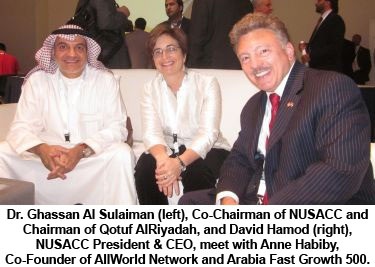 ​According to a recent report by the Kansas City-based Kauffman Foundation, all of the new net jobs created in the United States in recent years have come from companies less than five years old. Noted Kauffman Senior Fellow Jonathan Ortmans, "This new generation of startups is unleashing ideas through the marketplace that not only create wealth, but solve challenges and improve our daily lives."

Attracting new blood and fresh ideas are essential to entrepreneurial ecosystems, as the Silicon Valley experience has shown. According to a recent op-ed piece in The Wall Street Journal, more than 25 percent of U.S. tech companies have at least one founder who was born overseas, and a majority of Silicon Valley startups have a foreign-born founder. Moreover, 40 percent of Fortune 500 companies were created by an immigrant or a first-generation American.

Tapping into the spirit of entrepreneurship that infuses Silicon Valley is one of the top motivations behind NUSACC's annual High Tech Road Show (HTRS). Now in its sixth year, the 2013 Road Show will begin on January 7 in Las Vegas, proceed to Los Angeles, and then wrap up in Silicon Valley on January 16.
​
Dr. Ghassan Al Sulaiman, Co-Chairman of NUSACC and Chairman of Qotuf AlRiyadah, a new venture that encourages public/private entrepreneurship activity in Saudi Arabia, concluded, "The summit highlighted the increased importance that the world and individual countries are giving to entrepreneurship. It also served as a means to learn from the participants who are transparently sharing their successes and failures. Most important, it was an excellent place to network with fellow entrepreneurs and to benefit from the energy that those entrepreneurs brought to the summit."
HOME | Privacy Policy | My Dashboard | About | Contact | Sitemap
​Due to COVID-19,  and in the interest of public safety, walk-in service at NUSACC is temporarily suspended. Because our clients deserve the best possible service, certification services will continue to be offered by MAIL.