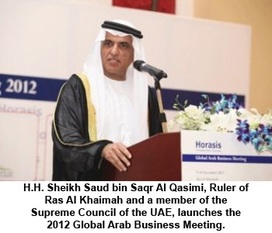 The annual Global Arab Business Meeting, hosted by the emirate of Ras Al Khaimah (RAK) in the United Arab Emirates, has just concluded its 2012 conference. Convened under the patronage of H.H. Sheikh Saud bin Saqr Al Qasimi, member of the UAE's Supreme Council and the Ruler of RAK, this year's event brought together more than 500 business leaders from around the globe to discuss the state of the Middle East & North Africa (MENA) region and to propose ways forward for the rapidly evolving Arab world. Organized by the Zurich-based think tank Horasis in cooperation with the RAK Investment Authority and the RAK Chamber of Commerce and Industry, the Global Arab Business Meeting is now in its third year.

​The National U.S.-Arab Chamber of Commerce (NUSACC) was a partner organization for this year's event, where the Chamber's President & CEO, David Hamod, served as a speaker. "We congratulate Ras Al Khaimah and Horasis on successfully orchestrating the 2012 Global Arab Business Meeting, which helped to break new ground in the search for solutions to the region's most pressing issues," noted Hamod. "Candid, thoughtful discussions like these -- bringing government officials and business leaders together around the table -- are extremely useful at a time when the region is searching for answers."
​
In opening remarks at the conference, H.H. Sheikh Saud bin Saqr Al Qasimi stated, "The Arab world's prospects are bright . . . . This Global Arab Business Meeting comes at a time when the Arab world is witnessing huge changes that require wisdom to emerge with lessons that could benefit the Arab world and its global partners." 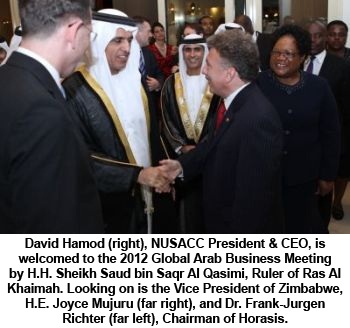 H.H. Sheikh Saud showcased Ras Al Khaimah as a hub and incubator for business leaders looking to enter MENA markets. "The emirate hosts many investments from different countries worldwide, especially in the area of industry," he noted, and "this sector exhibited its strength during the economic crisis." The RAK Ruler went on to say that in light of Ras Al-Khaimah's growing role as a business destination, the Global Arab Business gathering is an "ideal venue for effective communication and exploration of business and investment horizons, as well as discussion of views and sustainable plans for the future."

This perspective was reinforced by H.E. Abdulnaser Abdullah Al Qaseer, Director General of the RAK Chamber, who said that RAK "has become a top destination in the region, attracting foreign investment from around the world." He noted that Gross Domestic Product in RAK grew by eight percent in 2011, in part because of the emirate's "business-friendly environment, competitive production costs, and excellent infrastructure, not to mention its strategic location and natural beauty," which enhances RAK's high quality of life.

According to the Ras Al-Khaimah Investment Authority (RAKIA), the emirate's efforts to "enhance infrastructure facilities has been a major factor in attracting major foreign investments to Ras Al Khaimah. With a well-planned road network, an international airport, fully equipped seaports, and an advanced communications network, Ras Al Khaimah is well-positioned for rapid socio-economic growth."

Ras Al Khaimah, says RAKIA, is "uniquely positioned to serve and access markets like the Middle East, Africa, the Indian Subcontinent, and the CIS countries. RAK is the fourth-largest emirate in the UAE and has a rapidly growing economy, primarily due to the ambitious process of economic diversification that focuses on industry, trade & commerce, tourism, and real estate." These attributes, concludes RAKIA, have "helped the emirate to steadily increase its global appeal as a superior destination for business and leisure."
​
In this spirit, H.H. Sheikh Mohammed bin Saud bin Saqr Al Qasimi, Crown Prince of Ras Al Khaimah, held a special ceremony to honor companies selected in the United Arab Emirates as "Arab Business Leaders of the Year." The awards recognize outstanding entrepreneurs who have been building and leading successful global firms of Arab origin. The winners for the year 2012 included: Mohammad Sultan Al Qadi, Chairman, Commercial Bank International (UAE); Yusuff Ali, Managing Director, Emke Group (UAE); Selim G. El Zyr, Chief Executive Officer, Rotana (UAE); Mohammed Omran, Chairman, RAK Properties (UAE). In the course of the past year, according to organizers, awardees excelled in entrepreneurship, innovation, and leadership, and they had a decisive impact on the economic development and global integration of the Arab world. 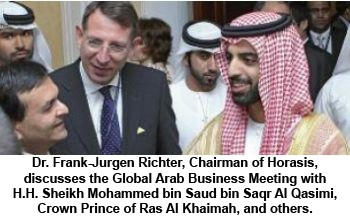 In remarks setting the stage for the Global Arab Business Meeting, Dr. Frank-Jurgen Richter, Chairman of Horasis, asserted, "We are witnessing a new era of change in the Arab world. We convene this event to reflect on this process of change, facilitating engagement and dialogue among business leaders and governments from the Arab world and beyond. The meeting provides a unique platform for discussion as the Arab world increasingly plays a pivotal role in the nexus of economic development and geopolitics." He concluded, "We will continue shedding light on potentials and regional challenges in an attempt to reach an even more prosperous future."

This year's gathering took place against a backdrop of growing unrest in Egypt, Syria, Palestine, and other parts of the Arab world. This instability had a profound impact on discussions at the event, which were as unscripted and candid as the events of the Arab Spring themselves. Topics included such subjects as "Assessing the Impacts of the Arab Spring," "Witnessing Change & Rethinking Competitiveness," and "The Middle East at a Crossroads."

Among the conclusions of the meeting, according to Horasis:
-- The Middle Eastern region is unstable in the wake of the Arab Spring. Priority for governments is to define the economic, social, and policy frameworks that best suit countries in consultation with the various factions of their societies. 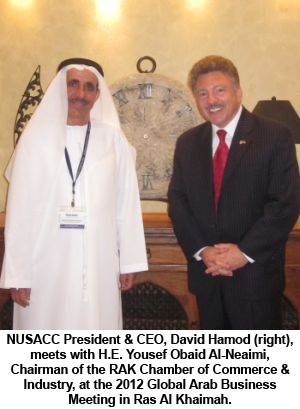 -- Governments have to create effective and accountable systems of governance, spearheading democratic societies with popular institutions and free markets. A majority of people in the Arab world wish for active political participation and real reform.
-- Unemployment remains a major concern. As the cornerstone of Arab societies, tackling unemployment and the training of future generations is of foremost importance as a factor in collective development.

"The region is still trying to find a new equilibrium that balances its political culture with an emerging enlightenment, while facing challenging economic tests," observed Sherif El-Gabaly, Chairman of Polyserve Fertilizer and Chemical Group in Egypt. Ms. Sara Ismail Mohammed, Chief Executive Officer of Al Bashayer Investment Company in the UAE, remarked, "The gradual rise in incomes and opportunities for young Arabs is a top priority."

And Omar Koudsi, Co-Founder and CEO of Jeeran, based in Jordan, concluded, "Entrepreneurship is bringing change where the Arab Spring has not . . . The need for change in business is inevitable and entrepreneurship is a catalyzing force in society as well, as we entrepreneurs create facts."

NUSACC's David Hamod, who helped to lead a discussion on "Assessing the Impacts of the Arab Spring," described what he called a "counter-intuitive situation" in U.S. exports to the Arab world. Despite the Arab Spring, he said, "U.S. exports to the MENA region are on track to shatter all previous records." According to research conducted by the National U.S.-Arab Chamber of Commerce, he noted, U.S. exports will make up $160 billion of the $1.3 trillion Arab import market by the year 2015, enlarging U.S. market share in the region from 9 percent to 12 percent.
​
Upon reflection, Hamod continued, the sustained rise in U.S. exports should not come as a surprise. The region is booming, he said, led by the GCC nations, and Greenfield markets in nations like Iraq and Libya are coming online every day. In addition, Hamod said, the traditional drivers of U.S. exports in the region -- energy, defense, infrastructure, and consumerism -- are showing few signs of abating anytime soon. 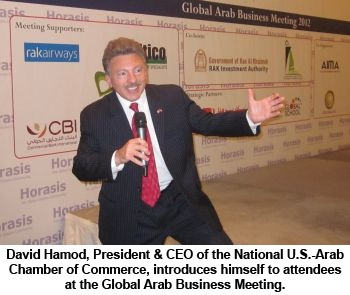 One of the fastest growing economic drivers, Hamod opined, is higher education and the knowledge transfer that it engenders. "In the context of the Arab Spring, he concluded, "this emphasis on knowledge-based economies and entrepreneurship may hold the key to what is arguably the biggest challenge facing the Arab world today: productive employment for the region's youth."
​
Concluded Frank-Jurgen Richter, Chairman of Horasis, "I thank NUSACC for its great support of the Global Arab Business Meeting, which convened at a critical time for the region. The important changes taking place in the Middle East have brought to light a number of socio-economic challenges -- such as employment, education and entrepreneurship. As outlined by H.H. Sheikh Saud in his opening remarks, the Arab world can realize its promise only if its people obtain the power to have their opinion heard and considered, to attain jobs and justice."
HOME | Privacy Policy | My Dashboard | About | Contact | Sitemap
Copyright © 2022, National U.S.-Arab Chamber of Commerce. All Rights Reserved