​In Serving the Nation's Capital, Emirates Opens the
Door for "60 Percent of the World" to Use Dulles Airport
as a Transit Hub to Washington DC and Beyond 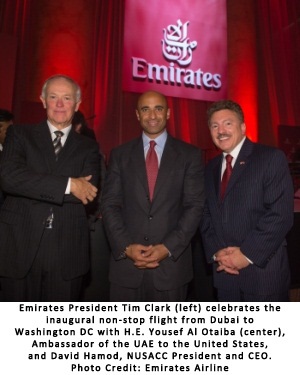 Emirates Airline has just launched its latest non-stop route to the United States, now offering direct flights from Dubai to Washington DC seven days a week. The inaugural flight took place on Wednesday, September 12, followed by a gala event at the historic National Building Museum. The gala, supported by the National U.S.-Arab Chamber of Commerce (NUSACC), featured crooner Lionel Richie, who serenaded some 500 guests with hit songs from his illustrious career.

Timothy C. Clark, President of Emirates Airline, announced in Washington DC this week that the new route will promote economic growth in the Greater Washington Metropolitan Area, as well as foster job creation. "This Emirates service will facilitate foreign trade and promote tourism to the capital region from around the world, including the Middle East, which generated over 100,000 visitors [to Washington DC] last year alone." According to Clark, Emirates Airline is now responsible for more than 100,000 jobs in over 12 U.S. states.
​
David Hamod, President & CEO of NUSACC, congratulated Emirates Airline on its new route to Washington DC. "In just a few short years, Emirates Airline has become one of the top foreign carriers serving the U.S. market. Emirates now has daily or twice-daily flights to seven destinations in the United States -- 56 flights per week -- including the nation's capital. We are enormously proud of what Emirates Airline has accomplished."

​Emirates now serves seven cities in America -- Dallas (TX), Houston (TX), Los Angeles (CA), New York (NY), San Francisco (CA), Seattle (WA), and Washington DC. (NUSACC participated in the launch event in Seattle in March of this year, which coincided with Boeing's delivery of its 1,000th 777 aircraft, which was dedicated to Emirates Airline.  The Dubai-based airline now has the largest fleet in the world of Boeing 777 aircraft, as well as Airbus A380s, which fly in and out of New York City every day.
​
According to President Tim Clark, "We look forward to connecting DC-area travelers with the largest number of one-stop flights to Africa, the Indian Subcontinent, the Middle East, and Southeast Asia." As such, he said, "Emirates offers important new choice, competition, and a higher level of internationally recognized service to the Washington DC market with a state-of-the-art product and fleet." Last year alone, Clark noted, Emirates spent $3.8 billion in new products.
None of this is lost on officials in Washington DC. John Potter, President and CEO of the Metropolitan Washington Airports Authority, said this week that "our passengers will benefit from this new service to the Middle East and connections to destinations around the globe." He concluded, "This year, as we celebrate the 50th anniversary of [Dulles] airport, the arrival of Emirates is cause for even greater celebration."

​A bevy of government officials attended the gala at the National Building Museum, including Washington DC's Mayor, Hon. Vincent Gray. Other high-level officials included (but were not limited to): H.E. Yousef Al Otaiba, the UAE's Ambassador to the United States; Hon. Michael Corbin, the U.S. Ambassador to the UAE; Hon. Robert Hormats, U.S. Under Secretary of State; Hon. Francisco Sanchez, U.S. Under Secretary of Commerce; Hon. Larry Walther, Director of the Export-Import Bank of the United States; H.E. Khalid Al Ghaith, UAE Assistant Minister of Economic Affairs at the Ministry of Foreign Affairs; and H.E. Mohamed Abdulaziz Al Shihhi, UAE Undersecretary at the Ministry of Economy. In addition, ambassadors from three other Gulf Cooperation Council (GCC) nations attended: Bahrain, Oman, and Qatar.

Logistically, according to Danny Sebright, President of the U.S.-U.A.E. Business Council, the new route will "benefit more countries than just the UAE and the US. Aviation experts judge that the UAE is within a six-hour flight of nearly 60 percent of the world's population. With the launch of the flights, 60 percent of the world will have the opportunity to use Dubai and Abu Dhabi as transit hubs for international travel to Washington and the broader US."
​
"Moreover, these new modes of travel will inevitably attract new customers -- local and international," said Sebright. He concluded, "By connecting the Washington metropolitan area to the UAE, the airlines will create a pathway to increase international commerce while working to solidify the UAE's stance as a global aviation hub."
HOME | Privacy Policy | My Dashboard | About | Contact | Sitemap
Copyright © 2022, National U.S.-Arab Chamber of Commerce. All Rights Reserved