EMIRATES AIRLINE LAUNCHES DAILY FLIGHTS
TO SEATTLE, PAVING THE WAY FOR A NEW ERA IN
RELATIONS BETWEEN UAE AND PACIFIC NORTHWEST 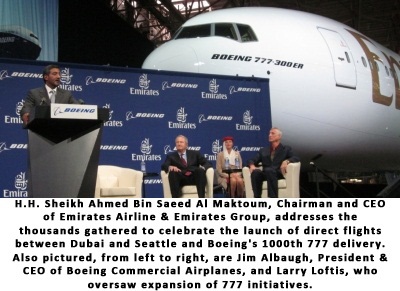 In recent days, new milestones were reached in expanding the commercial relationship between the United Arab Emirates (UAE) and the Pacific Northwest of the United States.  On March 1, Emirates Airline launched its inaugural flight from Dubai to Seattle, Washington -- marking the first non-stop flight from the Arab world to the Pacific Northwest.  One day later, Boeing celebrated its 1,000th 777 aircraft with a delivery to Emirates Airline, Boeing's top customer for 777s worldwide.  The two milestones highlight the increasingly important commercial relationship between the United Arab Emirates and the United States in general, and between Dubai and Seattle in particular.

A number of Emirati VIPs were on hand to celebrate the new developments, led by: H.H. Sheikh Ahmed Bin Saeed Al Maktoum, Chairman and CEO of Emirates Airline and Emirates Group; H.E. Sheikha Lubna Bint Khalid Al Qasimi, the UAE's Minister of Foreign Trade; H.E. Yousef Al Otaiba, the UAE's Ambassador to the United States; and H.E. Hamad Buamim, Director General of the Dubai Chamber of Commerce & Industry.  Justin Siberell, Consul General of the U.S. Consulate in Dubai, participated in the groundbreaking events, as did Danny Sebright, President of the U.S.-U.A.E. Business Council, and David Hamod, President & CEO of the National U.S.-Arab Chamber of Commerce (NUSACC).
"These back-to-back events in the State of Washington highlight the growing relationship between our two nations at all levels," said NUSACC's David Hamod, who took the new 14-hour flight from Seattle to Dubai.  "We congratulate Emirates Airline and Boeing on taking this decisive step to create an even closer connection between our peoples, our cultures, and our business communities."

Boeing was represented by a cast of thousands, literally, and led by Jim Albaugh, President & CEO of Boeing Commercial Airplanes, Shephard Hill, President of Boeing International, and Larry Loftis, who oversaw expansion of 777 initiatives in his capacity as Vice President-General Manager of the 777 Program.
​
Activities during two days of celebrations revolved around three main events: a business reception on March 1, a ceremony on the Boeing factory floor to commemorate the 1,000th 777 delivery on March 2, and a gala dinner the same day for 600 guests hosted by Emirates Airline.  Each of these events is highlighted below. 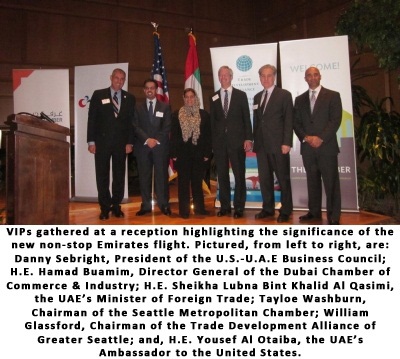 Business Community Reception
At a March 1 reception co-hosted by the Dubai Chamber of Commerce & Industry, the Seattle Metropolitan Chamber, the Trade Development Alliance of Greater Seattle, and the U.S.-U.A.E. Business Council, local business leaders from Greater Seattle area highlighted the significance of the new non-stop Emirates flight from Dubai to Seattle.

Tayloe Washburn, who as Chairman of the Seattle Metropolitan Chamber led an 85-member delegation from Seattle to the United Arab Emirates three years ago, characterized the new non-stop flight as an "air bridge between our two regions" that will help to build even stronger commercial relations "between the Seattle region and the UAE in research, education, renewable energy, technology, and other sectors."

H.E. Hamad Buamim of the Dubai Chamber characterized the growing commercial ties between Dubai and the Pacific Northwest as "one of the major milestones in UAE-U.S. relations."
​
The keynote speaker at the event was H.E. Sheikha Lubna Bint Khalid Al Qasimi, the UAE's Minister of Foreign Trade.  The new developments, she said, "mark the opening of another bridge, one that will expand trade, enhance diplomacy, broaden cultural understanding, and deepen the friendship that binds our countries -- and our communities -- even closer together." 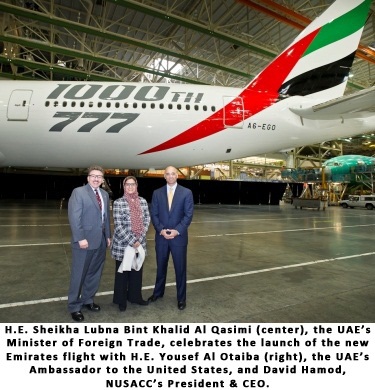 ​Emirates Airline, she suggested, "is driving connectivity, as well as boosting trade and business, bringing people from all over the world to numerous conferences and trade shows" in the UAE.  "Connecting people lies at the heart of our vision as a cosmopolitan nation," H.E. Sheikha Lubna noted, and in the spirit of Dubai's vision of "connecting minds, creating the future," she said, the new non-stop route "builds on our existing position as a crossroad between East and West."

The Minister of Foreign Trade highlighted some of the economic strides that the State of Washington and the UAE have made in recent years.  In 2011, for example, Washington was the top exporter from the U.S. to the UAE to the tune of $2.75 billion, helping to create over 30,000 jobs in the State of Washington alone.  The UAE has become the fifth largest destination among Washington's foreign export markets, generating $6 billion in aerospace exports alone during the period 2009-2011.

H.E. Sheikha Lubna invited guests to come to Dubai to shop in the world's largest mall and to take advantage of the Dubai Airport's Duty Free, the single largest airport retailer in the world.

Shopping aside, she said, "I hope it is becoming obvious that this new flight represents so much more than just economic benefits. It also marks another milestone in an important and expanding commercial relationship between the U.S. and the UAE.  In recent years, our bilateral relationship has evolved into a multidimensional partnership with trade and investment assuming a key role."  She concluded, "The U.S.-UAE relationship is rock-solid and only getting stronger."

Celebration at the Boeing Factory
​
On March 2, Boeing hosted a huge celebration on the factory floor in Everett, Washington to commemorate the 1,000th 777 delivery.  The gathering brought together senior leadership from Boeing and Emirates Airline, the 777's number one customer worldwide, as well as 5,000 Boeing employees, suppliers, and customers. 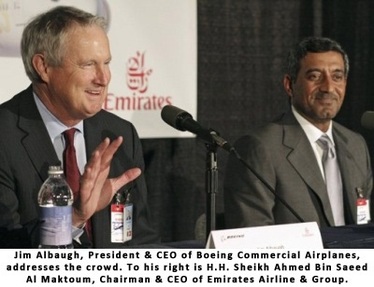 ​"As the largest 777 customer," said Jim Albaugh, President and CEO of Boeing Commercial Airplanes, "Emirates is the recipient of our milestone 1,000th 777.  Emirates has set an industry high bar in providing excellent customer service, and we're honored that the 777 is central to its efforts to be a global airline leader."

Last year was the best year on record for 777 sales, with 200 orders from 22 customers -- topping the previous record of 154 set in 2005.  Production is at an all-time high for the program, which will begin building 100 airplanes per year starting next year.  Emirates Airline was responsible for one quarter of the airliners ordered last year, bringing the total Emirates fleet so far to 102 777s.

"Emirates is honored to be the recipient of Boeing's 1,000th 777 aircraft, whose advanced long range capacity has been instrumental in our success of becoming a truly global airline," said H.H. Sheikh Ahmed bin Saeed Al-Maktoum, Chairman and Chief Executive of Emirates Airline and Emirates Group.  "As the world's largest operator of the 777, we have 93 more 777s on order, which is testament to our belief in the product and the role that this aircraft will play in our goal to further establish Dubai as a central gateway to worldwide air travel."
​
In recognition of the thousands of proud, enthusiastic Boeing employees who filled the hall, H.H. Sheikh Ahmed declared, "I salute the Boeing 777 workforce." 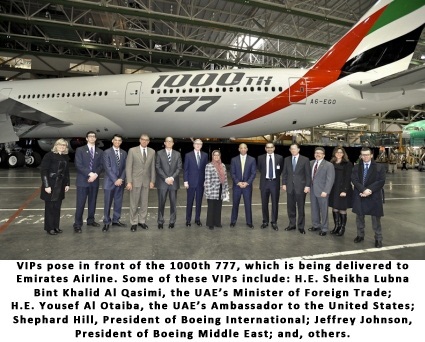 ​"The ultimate measure of success in this business is when you reach the 1,000 mark," said Larry Loftis, who oversaw the program's growth as Vice President and General Manager of the 777 Program.  "Reaching this milestone requires two things: A product that provides exceptional value, and a world-class production system to reliably bring that product to the marketplace.  As a result, the 777 program reached this milestone faster than any other twin-aisle airplane in history."

Sixty-four airlines now use the 777, which is known in Seattle by a simple moniker, the "WGA" (World's Greatest Airplane).  According to Boeing, a 777 is delivered every three days, and the aircraft has logged enough miles over the years to fly to the moon 67,991 times.  But on a day of many superlatives, the pride and success of the program was summed up by a Boeing employee in a single phrase: The 777 is the world's preferred airplane 1,000 times over.

Seattle is one of six gateways that Emirates Airline now serves in the United States, including Dallas, Houston, Los Angeles, New York City, and San Francisco.  At each destination, a new route has been celebrated with a gala event, and Seattle was no exception.  On Friday, March 2, over 600 guests packed the Washington State Convention Center for a concert by legendary rock star Tom Jones and to watch a performance by the award-winning "Spirit of the Dance" troupe.
​
As part of the festivities, H.H. Sheikh Ahmed Bin Saeed Al Maktoum, Chairman and CEO of Emirates Airline, was awarded "Honorary Washington Citizenship" by the Hon. Christine Gregoire, Governor of the State of Washington.  This commendation followed an official proclamation, issued by Governor Gregoire, recognizing March 1, 2012 as "Emirates Day" in the State of Washington. 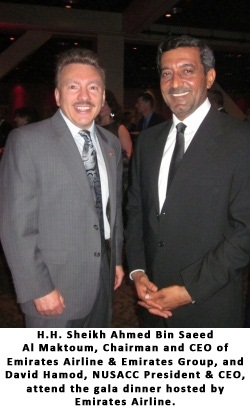 ​With the advent of the new non-stop flight from Dubai, Seattle may realize as much as $200 million in new local economic activity, as well as new employment opportunities.  Over the years, Emirates Airline has invested significantly in American equipment and human capital.  According to the U.S.-U.A.E. Business Council, the airline employs over 700 Americans globally and its ledger includes a record-breaking $24 billion order for fifty Boeing 777-300ERs that was placed at the Dubai Air Show last November.  Emirates Airline's planned investment in American industry is expected to support skilled jobs in more than a dozen states and positively influence over 250,000 direct and indirect American jobs, according to the U.S. Department of Commerce.

The new route has the potential to open up new markets for the Pacific Northwest in the Middle East, Asia, and Africa.  Two-thirds of the world's population lives within an eight-hour flight of Dubai, and the airport there -- which greeted more than 50 million passengers last year -- has become a major center for re-exports around the globe.

The gala dinner highlighted the fact that Emirates Airline and Seattle-based Boeing have come a long way together.  Emirates started with two planes, one of which was a Boeing, and the airline ordered its first 777s -- three of them -- in 1992.  Today, with the strong emphasis by Emirates Airline on long-haul flights, more than 70 percent of their fleet is composed of 777s.


Trade Opportunities Abound
​
The United Arab Emirates is the top U.S. export market in the Arab world, with $15.89 billion worth of goods shipped to the UAE in 2011.  This is the highest level ever and represents a 36 percent increase over 2010 levels.  This trade relationship is reinforced by a strong American commercial presence in the UAE: over 30,000 Americans live and work in the UAE, and more than 750 U.S. companies have based their regional operations there.

The top five exporting States to the UAE last year included Washington ($2.75 billion), Texas ($2.0 billion), New York ($1.5 billion), California ($1.4 billion), and Florida ($1.2 billion).  The Port of Seattle serves as the largest American port for trade with the UAE, a reflection of the State's growing and diverse export potential.  In 2011, the top five exports from the State of Washington worldwide included transportation equipment ($4.49 billion), agricultural products ($610 million), computer & electronic products ($63 million), machinery ($61 million), and food & kindred products ($46 million).
​
Seattle is home to such innovative companies as Microsoft, Amazon, Starbucks and, of course, Boeing.  The city boasts a number of leading educational institutions, including but not limited to the University of Washington, Seattle Pacific University, Seattle University, and City University of Seattle.  The University of Washington is one of the nation's top recipients of federal research dollars, which has been crucial to its ability to launch upwards of 200 businesses over the years.  This creative, innovative environment is one of the reasons that Kiplinger magazine recently ranked Seattle as #2 in "Best Cities of the Decade."
HOME | Privacy Policy | My Dashboard | About | Contact | Sitemap
Copyright © 2022, National U.S.-Arab Chamber of Commerce. All Rights Reserved