​Qatar, as Host Country for the FIFA 2022
World Cup, Uses First-of-its-Kind
Event to Explore the Role of Sports in Society

The National U.S.-Arab Chamber of Commerce this week participated in "Doha GOALS," a first-of-its-kind conference dedicated to advancing international relations through sports. The two-day event brought together more than 2,800 delegates from 62 countries, including sports luminaries from all over the world.
​
David Hamod, President & CEO of the U.S.-Arab Chamber, was in Doha for the gathering. "Over the years, the State of Qatar has done a remarkable job of raising its profile globally through sports," Hamod noted. "In planning this event under the patronage of H.H. Sheikh Hamad Bin Khalifa Al Thani, the Emir of Qatar, the Qatar Olympic Committee (QOC) has taken this commitment to sports diplomacy to a whole new level." 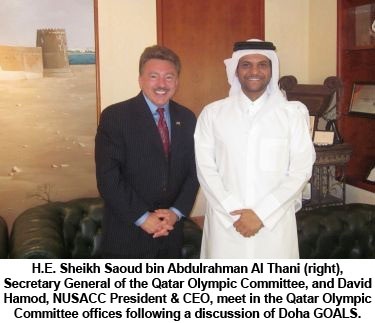 In opening the conference, H.H. the Emir said, "Although sport is the cause of our gathering here in Doha today, it's always important to remember that sport is not an activity merely for fun and entertainment, but a means for building communities thanks to its ability to entrench the principles of justice, peace, unity, friendship, co-operation and co-existence, in addition to its ability to transcend cultural and ideological barriers and all forms of disparity."

H.H. the Emir placed a special emphasis on youth, which he called "the charm of life." He noted, "We give all care and attention to the youth; they are our most valuable assets. With them we proceed forward confidently towards the future to make a better world." He went on to say that the Arab world "stands on the verge of a quantum leap. The Arab Spring bloomed into a generation of young people who are determined to achieve their dreams and ambitions." Apropos of this, more than 400 male and female "Student Ambassadors" of sport from around the world attended Doha GOALS ("Gathering of All Leaders in Sport").
​
Building a brand and leaving a legacy for mega-sporting event can transform a city and people, noted H.E. Sheikh Saoud bin Abdulrahman Al Thani, Secretary General of the Qatar Olympic Committee. "One big reason why countries and cities like to host these events is to speed up the process of building the nation and its infrastructure," he said, "including sport infrastructure and modernizing the country" The State of Qatar hosted the 2006 Asian Games, one of the most successful ever, and Doha is laying groundwork to someday host the Olympic Games. 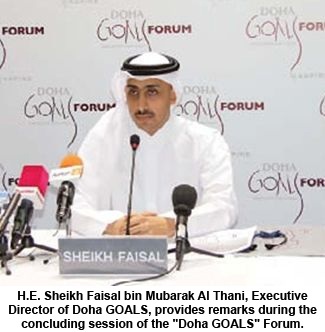 "Legacy needs to be thought about before the bidding process of any major sporting event," H.E. Sheikh Saoud noted. One of the best legacies of the 2006 Asian Games, he suggested, was the spirit of volunteerism that community service that was inspired by those Games, which generated great pride among Qataris and non-Qataris alike.

The world-class event attracted such sports legends such as sprinter Carl Lewis, swimmer Ian Thorpe, sprinter Oscar Pistorius, swimmer Marc Spitz, and others. They related their experiences and offered suggestions on the welfare of athletes, federation governance, sport as a tool for the education of youth, and the integration of women and minorities through sport and cross-culture cooperation. Workshops tackled such topics as: "How Can Sport Be an Agent for Change in Society?"; "How Do We Use Sports to Alleviate Social Challenges Facing Children and Young Adults?"; "How Do We Protect Integrity in Sport?"; and "How Do We Encourage More Women and Girls to Participate in Sport?"
​
Founded in January 2012 under the patronage of H.H. Sheikh Hamad bin Khalifa Al Thani, the Emir of Qatar, Doha GOALS ("Gathering of All Leaders in Sports") is the world's first major platform for creating initiatives for global progress through sports. Each year, global leaders will gather in Doha with top stakeholders -- CEOs, government officials, athletes, NGOs, federation heads, urban developers, coaches, managers, and medical experts -- to create partnerships and initiatives to tackle pressing social issues through plenary sessions, debates, and focused taskforces that enable constructive brainstorming and focused collaboration. 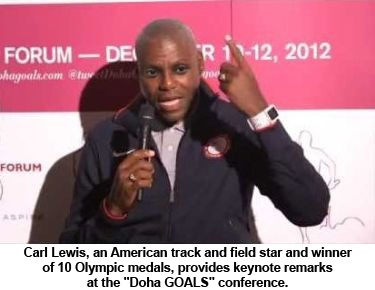 Doha GOALS was founded with the thought that sport unifies across borders, cultures, and beliefs. Sport is universal, an international language transcending language, race, and religion. Sport offers a level playing field on which everyone is an equal participant. It is inclusive by nature and its fundamental principles make it highly effective in addressing problems of global concern.

The Doha GOALS initiative has special significance for Qatar, which has been selected to host the FIFA World Cup in 2022. Qatar is the first nation in the Arab world to achieve this status, and the 2022 event will drive much of the nation's economic development goals over the next decade.
​
In concluding the conference, Executive Director of Doha GOALS, H.E. Sheikh Faisal bin Mubarak Al Thani, noted, "This forum is not just for Qatar or the Middle East. It is for all countries in the world wishing to make a difference."
HOME | Privacy Policy | My Dashboard | About | Contact | Sitemap
Copyright © 2022, National U.S.-Arab Chamber of Commerce. All Rights Reserved