​The National U.S.-Arab Chamber of Commerce (NUSACC) -- in support of "Discover 2012," a global business forum being held in Atlantic City -- participated today in a panel discussion on "Taking the Temperature of the Middle East." The three-day conference was organized by the Mid-Atlantic District Export Council, and NUSACC was one of three Gold Sponsors helping to underwrite the Forum.
David Hamod, President & CEO of NUSACC, stated, "Our Chamber is proud to support the 'Discover 2012' Forum and the Mid-Atlantic District Export Council. Working together, in a public/private partnership, we have helped to pave the way throughout the Middle East for numerous U.S. companies, particularly small & medium-sized enterprises." 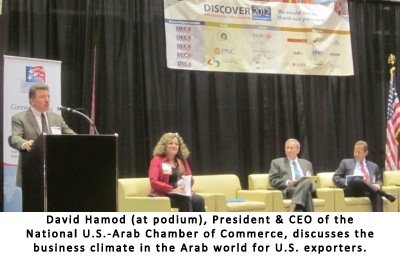 In the panel discussion on "Taking the Temperature of the Middle East," Hamod provided an overview of business trends throughout the region. He noted that U.S. exports to the region are doubling every four years and that goods and services are on track to jump from $84 billion in 2011 to $168 billion by 2015, creating 1.5 million U.S. jobs. He noted that demand for U.S. exports is driven largely by the Gulf Cooperation Council (GCC) countries -- led by the United Arab Emirates (UAE) and Saudi Arabia -- which currently make up approximately 70 percent of demand. That figure is slated to drop to about 65 percent by 2015, Hamod said, when non-GCC nations like Iraq and Libya are expected to experience higher demand for U.S. products.

He went on to say that Arab nations that have signed Free Trade Agreements (FTAs) with the United States -- notably Bahrain, Jordan, Morocco and Oman -- are turning in impressive results and are avoiding some of the "peaks and valleys" that have characterized their trade posture in years past. According to a forthcoming report by the National U.S.-Arab Chamber of Commerce, Hamod noted in his prepared remarks, the value of U.S. bilateral trade with these trade partners over the past four years grew at an average annual rate of 13.5 percent. This outpaced the average annual yearly growth (8.4 percent) in bilateral trade over the same time period with other bilateral FTAs and was more than double the six percent growth rate of overall U.S. trade with the world. Hamod concluded, "Average annual bilateral trade growth with Arab FTA partners was seven percent in the years preceding an FTA with the United States. After FTA implementation, the average annual bilateral growth surged to 27 percent."
​
U.S. market share throughout the region is generally holding steady or growing, Hamod said, but he cautioned against "resting on our laurels" in the face of increasingly aggressive competition, particularly from Asia. "The American brand is synonymous with quality," Hamod noted, "but doing business in the Middle East is not a cakewalk. Everybody and his brother from around the world is competing for contracts there." 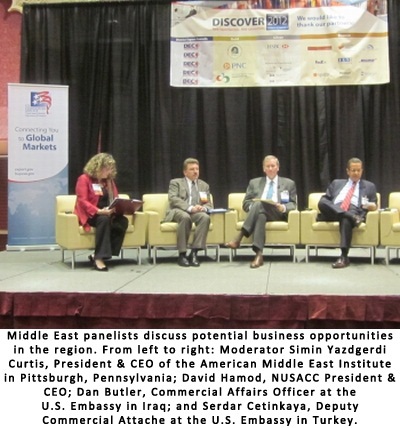 Butler noted that the World Bank and International Monetary Fund (IMF) predict that Iraq's GDP will grow by 12 percent in 2012 and 10 percent in 2013, driven primarily by rising oil production and higher oil prices. Economic growth will be buttressed by robust increases in government expenditures, he said, highlighting the fact that Iraq's 2012 capital budget is up nearly 35 percent over the previous year, and more increases are expected.

In 2011, total two-way trade between Iraq and the United States reached $19.3 billion, a 40 percent increase from 2010. Total U.S. exports to Iraq rose to $2.4 billion during that same period, up 48 percent from 2010. Total Iraqi exports to the United States reached $16.9 billion, up 39 percent from 2010, largely due to increased demand for oil, coupled with higher petroleum prices. According to a forthcoming report from the National U.S.-Arab Chamber of Commerce, Iraq is on track to become America's third largest market in the Arab world by 2015, behind the UAE and Saudi Arabia.

However, on the whole, he argued, these challenges are outweighed by opportunities that Iraq presents, such as vast infrastructure development needs ($186 billion over the next five years), a national housing program to build two million new units, a Ministry of Higher Education initiative to fund 10,000 graduate scholarships, defense needs valued at $5 - $10 billion in the foreseeable future, increased power generation to the tune of 33 percent by the end of 2012, and a number of new airports and railway lines.

The U.S. Embassy is encouraging U.S. companies to participate in the Baghdad International Fair, scheduled for November 1-10, 2012. The event is expected to draw over one million participants, including senior Iraqi Government officials, direct end-users, agents, distributors, thought leaders, and media representatives.
​
Atlantic City is one of the nation's best known conference venues, equidistant to population centers along the Eastern Seaboard. The Atlantic City region is home to businesses in such key sectors as healthcare services, banking and financial services, and aerospace & defense. Located along the Atlantic Ocean, this region is host to more than 30 million tourists annually. Top companies based in or near Atlantic City include Cognizant Technology Solutions, Honeywell International, Johnson & Johnson, Medco Health Solutions, Merck, NRG Energy, Prudential Financial, and Quest Diagnostics.
HOME | Privacy Policy | My Dashboard | About | Contact | Sitemap
​Due to COVID-19,  and in the interest of public safety, walk-in service at NUSACC is temporarily suspended. Because our clients deserve the best possible service, certification services will continue to be offered by MAIL.