​H.E. Mustafa Abushagur Says That, After Over
40 Years, Libya is "Open for Business" 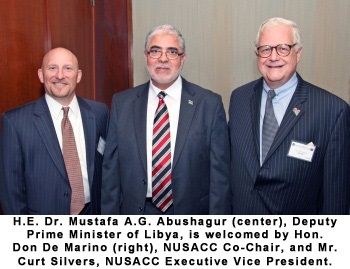 "The National U.S.-Arab Chamber is eager to build on past successes and to re-double our efforts to expand U.S.-Libya trade in the new environment of political and economic freedom," stated Hon. Don De Marino, NUSACC's Co-Chairman. "We look forward to helping build even stronger ties between Libyan and American companies as we all move forward together."

"It has been just nine months since the end of hostilities," noted Deputy Prime Minister Abushagur, "but we have made significant progress on the most critical issues." Dr. Abushagur went on to state that Libya is: in the midst of "executing a plan to turn Libya into a stable, democratic country; beginning to experience a renaissance of civil society organizations and interest groups; making significant progress in stabilizing and maintaining a functioning rule of law; continuing to reintegrate freedom fighters and begun a process of reconciliation to heal the divisions caused during the old regime's reign of terror; and seeing Libya's economy revitalize and new opportunities emerge for even more Libyans."

Dr. Abushagur specifically pointed to four key factors to ensuring Libya's prosperity:
​
Stability
Deputy Prime Minister Abushagur began by assuring the crowd that Libya is safe and secure. Nevertheless, he added that plenty of work needs to be done to ensure that Libya achieves sustainable security. In particular, he discussed a detailed plan to bring former fighters -- to whom all Libyans owe an enormous debt, he said -- into Libya's government institutions.

Physical Infrastructure
Infrastructural needs present massive opportunities for U.S. business. Dr. Abushagur stated, "As a result of four decades of neglect, there is an urgent need to rebuild and modernize our critical infrastructure. Our roads, airports, medical facilities, water & sewer systems outside of Tripoli are largely underdeveloped. We are lucky to have some resources to fund these projects, but we need an infusion of foreign investment and the involvement of top firms to ensure that we develop our infrastructure in an efficient and effective manner." (When asked by a member of the audience when a master plan for Libya's development would be made available, Dr. Abushagur stated that he expects it to be public within a year, after the transitional government paves the way for a nationally elected government.) 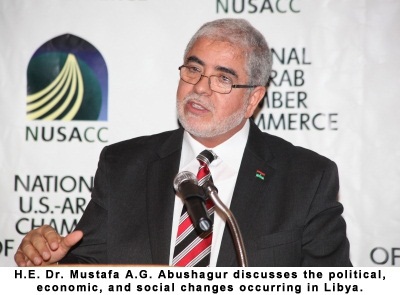 ​Human Capital
In terms of human capital, Dr. Abushagur highlighted two trends. Libya, like much of the Middle East and North Africa (MENA) region, has a wealth of potential in its youth population, he suggested. In that spirit, Dr. Abushagur noted, "We want to provide our youth and future generations of Libyans the opportunity to pursue a world-class education at home and abroad so that they can further develop their talents." He also referenced quality medical care as a core element of cultivating high-level human capital, stating, "In order to modernize our healthcare system, we seek to form partnerships with the world's leading hospitals, many of which are located in America."

Business Environment
With regard to the commercial environment in Libya, Dr. Abushagur noted, "Under Qaddafi, business deals were based largely on cronyism, corruption was rampant, and Libya's resources were misappropriated by those in power." He went on to say that Libya's new leadership is "committed to creating an open, transparent business environment. And in order to accomplish this we must implement rule of law, adhere to global standards for trade and investment, and reconstitute our financial systems with an emphasis on transparency and accountability. The commercial environment in America sets the gold-standard for openness and transparency, and we could certainly benefit from the expertise of American firms to make improvements in these areas." In that context, he also mentioned Libya's dependence on oil, noting that the goal is to reduce dependence on oil from around 70 percent of GDP before the war to 30-40 percent of GDP in the next 10 years. 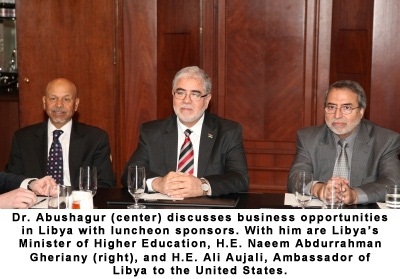 ​H.E. Ali Aujali, Libya's Ambassador to the United States, noted, "The relationship between Libya and the United States has never been stronger. The U.S. private sector has the opportunity to play a role in rebuilding Libya and enabling us to meet our aspirations for peace, prosperity, and a high quality of life."

Dr. Abushagur's visit to Washington follows the historic visit of Prime Minister Abdurrahim El-Keib in March 2012, when a number of cooperative agreements were signed with the United States. His visit also comes on the heels of the historic Memorandum of Understanding (MOU) that was signed in March between NUSACC and the Tripoli Chamber of Commerce, Industry, and Agriculture. The MOU, the third such agreement between the two chambers, is designed to promote trade and investment between Libya and the United States and is the first of its kind since Libya's revolution last year.

The MOU revolves around the creation of a new Libya - U.S. Joint Business Council, which will provide a framework for strengthening economic relations between the two nations. The new private sector entity will be dedicated to promoting free enterprise, economic growth, job creation and, ultimately, a better quality of life for both countries.

"NUSACC has been privileged to receive numerous high-level delegates from Libya in recent months, and today's visit by H.E. Dr. Mustafa A.G. Abushagur represents a 'high-water mark' in the growing relationship between Libya and the United States," said David Hamod, President & CEO of the National U.S.-Arab Chamber of Commerce. "As Dr. Abushagur's speech today suggested, government-to-government relations are key, but so are business-to-business relations, which will help to create productive jobs in the new Libya. Our Chamber, working hand-in-hand with our counterparts in Libya, is proud to be part of this historic undertaking."

As a part of this effort, NUSACC is currently leading a "Greenfield Trade & Investment Mission" to Libya and Tunisia. The delegation is comprised of representatives of more than a dozen large, small, and medium-sized companies with revenues of more than $250 billion last year. Delegates are set to arrive in Libya momentarily to conduct meetings in Tripoli, Benghazi, and Misurata, and the group will then travel to Tunisia for meetings in Sfax and Tunis. 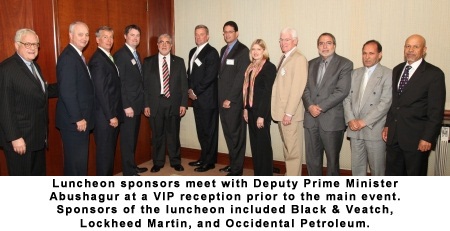 ​H.E. Dr. Abushagur concluded, "The Libyans are a resilient, entrepreneurial people who are accustomed to rising above the challenges before them. Libya is now open for business. I invite you to come see for yourself. I am confident that the involvement of American firms in Libya will greatly benefit both of our countries for years to come."
HOME | Privacy Policy | My Dashboard | About | Contact | Sitemap
Copyright © 2022, National U.S.-Arab Chamber of Commerce. All Rights Reserved