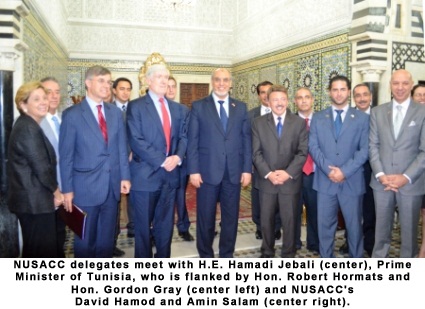 The National U.S.-Arab Chamber of Commerce (NUSACC) formally initiated its "greenfield" visit to Tunisia today with a meeting with H.E. Hamadi Jebali, Tunisia's Prime Minister. The session was held in cooperation with Hon. Robert Hormats, U.S. Under Secretary of State for Economic Growth, Energy, and the Environment, and Hon. Gordon Gray, U.S. Ambassador to Tunisia -- both of whom attended the meeting. The high-level session sent a clear signal about the strong support that Tunisia enjoys from the U.S. Government and America's private sector.

"The United States is committed to a successful economic and political transition in Tunisia, and the public-private partnership with U.S. and Tunisian businesses is an essential component of these efforts," said Under Secretary Hormats. "Tunisia's integration into the regional and global economy offers numerous opportunities for Tunisian, U.S., and other international companies."

A similar theme was sounded by Hon. Gordon Gray, the U.S. Ambassador to Tunisia. "This visit reflects the importance that the U.S. Government and the American people place on expanding Tunisian-American commercial relations," he said. "I am particularly pleased that the delegation is able to meet with Tunisian officials and business people in both Tunis and Sfax."

H.E. Prime Minister Jebali told NUSACC delegates that the government and people of Tunisia have great confidence and trust in the relationship with the United States. He noted that Tunisia looks forward to working with America's private sector to help strengthen the commercial relationship, including cooperative initiatives in such promising sectors as renewable energy, tourism, agriculture, and information & communications technology. In his concluding remarks, H.E. the Prime Minister said that this visit, which highlights cooperation with America's public and private sectors, sends a very positive message to the Tunisian people that the U.S. Government and American businesses are very keen to work with the Republic of Tunisia.

Today's meeting with the Prime Minister follows a roundtable meeting that the National U.S.-Arab Chamber of Commerce recently co-organized with the World Bank in Washington DC for Tunisia's Minister of Investment & International Cooperation, H.E. Riadh Bettaieb, and Tunisia's Minister of Finance, H.E. Hassine Dimassi. The off-the-record discussion with some of Tunisia's most senior officials, including Tunisia's Ambassador to the United States, H.E. Mohamed Salah Tekaya, provided an excellent opportunity for Americans and Tunisians to discuss trade and investment strategies.

"Our discussions focused on the progress achieved by Tunisia in its transition to democracy and on the efforts to fulfill the aspirations of the Tunisian people for dignity and freedom," said H.E. Ambassador Tekaya. He concluded, "We are exploring the economic and social challenges that Tunisia is trying to meet, as well as the opportunities that our nation offers -- including incentives and advantages granted to investors." 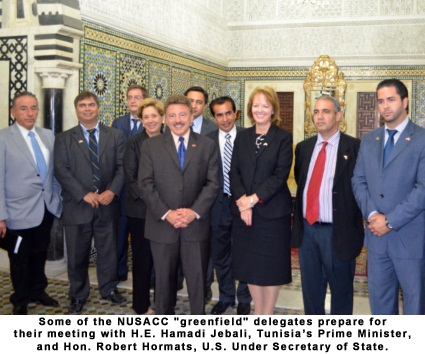 The Chamber's "greenfield" trade & investment mission is the first executive-level business delegation to visit Libya and Tunisia since their respective revolutions this past year -- which have had a major impact on the Middle East and North Africa (MENA) region. This is the fourth mission that the National U.S.-Arab Chamber of Commerce has brought to Tunisia in recent years, reflecting the high priority that NUSACC places on that nation as a U.S. investment destination.

The delegation is composed of 13 companies, generating over $250 billion in revenues last year, with delegates representing 10 different states. NUSACC delegations, like this one, typically consist of Fortune 100 companies, as well as numerous small and medium-sized enterprises (SMEs). Sectors represented on this trade & investment mission include the following: agribusiness, construction & engineering, defense & security, energy, information & communications technology (ICT), law, and medical.

​
"Our delegation is privileged to pay our respects to H.E. Prime Minister Jebali, and this meeting is in keeping with the extraordinary hospitality that the Tunisian people have shared with our delegation," concluded David Hamod, President & CEO of the National U.S.-Arab Chamber of Commerce. "With encouragement from H.E. the Prime Minister and the U.S. Government, and in cooperation with our private sector partners here in Tunisia, we look forward to establishing a whole new level of commercial cooperation between our two nations."
HOME | Privacy Policy | My Dashboard | About | Contact | Sitemap
Copyright © 2022, National U.S.-Arab Chamber of Commerce. All Rights Reserved