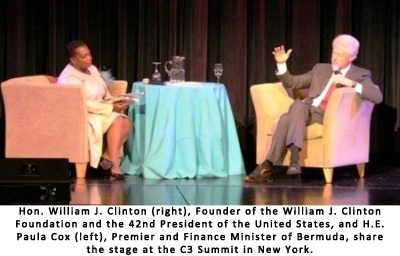 The "C3 Summit" opened in New York City today, kicking off two days of speeches and panel discussions about dialogue between the United States and the Arab world. This first-of-its kind event, supported by the National U.S.-Arab Chamber of Commerce (NUSACC), concentrated on three C's of the U.S.-Arab relationship: Collaboration, Community, and Commerce.

Former President of the United States, Hon. William J. Clinton, served as keynote speaker, offering remarks on "Embracing Our Common Humanity." He suggested that there are three major problems with an interdependent world: inequality of access to natural and human resources, unsustainable energy needs, and instability stoked by the speed at which crises can now travel around the world. Noting that "bad things can travel fast, too," Mr. Clinton alluded to financial contagion during the recent global economic downturn. He also discussed the Arab Spring, about which, he said, "the jury is still out." In a search for peace in the Middle East, he said, there needs to be majority rule, minority rights, and shared decision-making.
​
Regarding trade relations, Clinton noted that 2013 would be a good year to expand free trade agreements (FTAs) between the United States and the Arab world. To do so, however, will require increased transparency and capacity, he suggested, as well as increased knowledge between partners about the benefits of such agreements. He also emphasized the value of each new business and each new entrepreneur to the global economy, concluding with three suggestions: increasing cultural understanding, increasing patience and acceptance of differences, and increasing generosity in international relations. 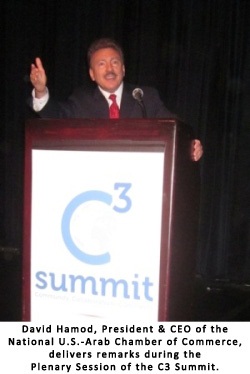 ​David Hamod, NUSACC's President & CEO, helped to open the conference with H.E. Paula Cox, Bermuda's Premier (Prime Minister). In his remarks, Hamod paid respects to Hon. Christopher Stevens, the U.S. Ambassador to Libya who was slain in Benghazi two days ago. "Chris was a good friend of the National U.S.-Arab Chamber of Commerce," he said, "and I would like to honor his memory this morning by invoking his name." Hamod noted that the recent outbreaks of violence in Egypt and Libya are stoking U.S.-Arab tensions not seen since the tragedy of September 11, 2001, but he discounted suggestions that the recent attacks are condoned throughout the Arab world. "Make no mistake," he said, "the extremists who assassinated Chris Stevens do not represent the people of Benghazi or Libya."
​
On the commercial front, Hamod noted that "U.S. exports of goods and services to the Arab world are breaking all existing records. Merchandise exports in 2011 were up 15 percent, surpassing $56 billion -- the highest single-year sales volume ever." He noted that exports are on track in 2012 to break that year-old record. One of the brightest spots in the service sector, he said, revolves around education. "Technology transfer still plays a vital role in U.S.-Arab commercial relations," he said, "but it won't be long before tech transfer is overtaken by knowledge transfer, enabling the Arab world to complete the transition from a hydrocarbons-based economy to a knowledge-based economy." 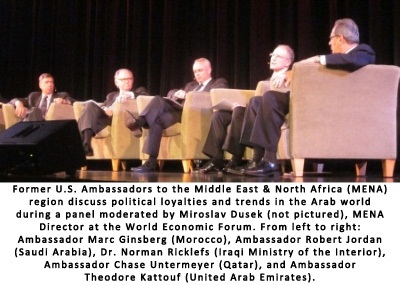 Ambassador Ginsberg highlighted the importance of free trade agreements (FTA) in promoting economic reform, trade and foreign direct investment, and entrepreneurship opportunities. There is widespread support for a free trade area in North Africa, he said, but the biggest single impediment to such an agreement has been foreign policy differences between Algeria and Morocco.
​
Ambassador Jordan outlined ways that economic reform in Saudi Arabia was expedited by that nation's accession to the World Trade Organization (WTO). The Kingdom today is giving more time and attention to such growing economies as China and India, Ambassador Jordan suggested, but Saudi Arabia will continue to turn to the United States to fulfill its security needs and, increasingly, to gain experience in entrepreneurship.

Ambassador Untermeyer pointed out that the United States is now less dependent on the Arab world to fulfill its energy needs, yet Middle Eastern oil is not about to disappear anytime soon. In fact, technological breakthroughs in the United States are leading to some strategic realignments in the energy sector. For example, the LNG importing terminal at Port Arthur, Texas, will soon be reconfigured to become a natural gas exporting terminal.
​
Ambassador Kattouf suggested that if there were a unifying theme among the presentations by the former ambassadors, it would probably be that there is more room today for American "soft power" in the Middle East than in the past. He highlighted opportunities in education reform, including a better understanding of America's commitment to the U.S. Constitution and the rule of law. "More free does not necessarily equal more tolerant," Kattouf noted, pointing out that "dark elements," too, are exploiting these new-found freedoms. 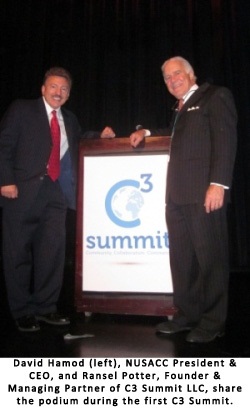 ​The C3 Summit is dedicated to building new relationships, fostering existing partnerships, and exchanging best practices between the U.S. and the Arab world by building a cohesive global community through collaboration and international commerce. The Summit assembles business leaders, policy makers, educators, and civil society members to uncover and promote U.S. and Arab world initiatives that are focused on economic, cultural, and social initiatives. The three tenets of the conference revolve around a vision to build, foster, and strengthen relationships between the U.S. and Arab businesses, policy makers, and civil society through Community (creating a global platform for exchanging best practices), Collaboration (promoting dialogue and expanding existing relationships), and Commerce (facilitating new ventures and opportunities).

Ransel Potter, Chairman of the event and the driving force behind the C3 concept, expressed appreciation to NUSACC for its role in supporting the two-day conference. He noted that the National U.S.-Arab Chamber of Commerce, "as the first sponsor to share the vision and strategic perspective [of C3], today helped bring to reality what was only a dream a year ago." He concluded, "With NUSACC's support and guidance, C3 was able to reach its first year goals, including plans to locate C3 in Doha next year."
​
Today's events took place at the American Museum of Natural History in New York City. Conference proceedings will continue tomorrow at the Union League Club.
HOME | Privacy Policy | My Dashboard | About | Contact | Sitemap
Copyright © 2022, National U.S.-Arab Chamber of Commerce. All Rights Reserved