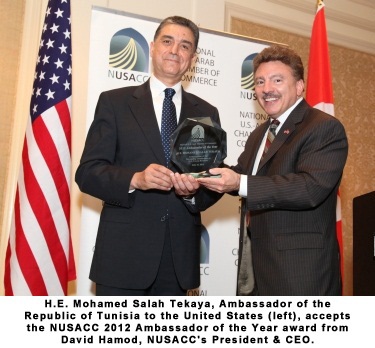 The National U.S.-Arab Chamber of Commerce (NUSACC) today named H.E. Mohamed Salah Tekaya, Tunisia's representative to the United States, as its "Ambassador of the Year." More than 100 business and government leaders participated in the awards luncheon at the Ritz-Carlton Hotel in Washington DC, including the Honorable Gordon Gray, former U.S. Ambassador to Tunisia. The highly coveted Ambassador of the Year Award, now in its eighth year, has been bestowed on North African ambassadors three times.

"Since the advent of the Arab Spring, the eyes of the world have been on Tunisia," said David Hamod, President and CEO of the U.S.-Arab Chamber. "During this period of transition in Tunisia, Ambassador Tekaya has represented his country with quiet determination and unfailing grace under some very challenging circumstances. It is clear that his 30 years of diplomatic service have prepared him well for this unique assignment."

In his acceptance speech, Ambassador Tekaya said, "I am humbled by your kind and generous words and I am honored, indeed, to receive this recognition from the National U.S.-Arab Chamber of Commerce. I am grateful to the Chamber for that distinction, which recognizes the work that has been accomplished by the Embassy of Tunisia in Washington. I consider it as a distinction bestowed on Tunisia."

He continued, "As the revolution in Tunisia has opened new horizons for the people of Tunisia, it has also created new opportunities for our bilateral relations with the United States in various fields, especially in trade and investment. Enthusiastic efforts have been made, during the past year and a half, in both countries to explore these opportunities. Our two countries have pursued talks on a Trade and Investment Framework Agreement, and we hope also to conclude, one day, a Free Trade Agreement. We recognize that such efforts will need time to produce long-term effect, but what has been accomplished is encouraging."

Ambassador Tekaya noted that Tunisia has been "working hard to overcome the economic and social challenges it has been facing since the revolution, particularly unemployment. The Government works to ensure the recovery of the economy and to improve the business climate through the introduction of reforms in various sectors and the revision of the investment code so as to attract more investors. It works also to facilitate administrative procedures for entrepreneurs, to improve mechanisms for the creation of small and medium enterprises, to strengthen transparency and the respect for the principles of good governance, and also to ensure stability and security."

Tributes and a Fond Farewell
​
Ambassador Tekaya is concluding his tour in the United States, so the award ceremony was very celebratory, but also tinged with wistfulness. 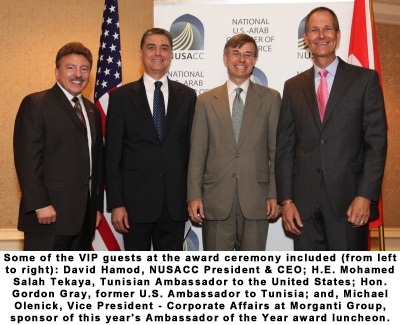 ​Hon. Robert Hormats, Under Secretary of State for Economic Growth, Energy, and the Environment, praised Ambassador Tekaya for his diplomatic service. "I want to express my deep appreciation for everything that you have done for the relationship between Tunisia and the United States," Hormats noted. "On my most recent trip to Tunisia, I witnessed your outstanding work during this dramatic period of change. The United States and Tunisian governments enjoy an extremely close friendship, and the U.S. private sector is eager to expand its presence in your nation."

Hormats concluded, "I am grateful also for the close personal friendship that I have shared with you over the last few years. You will be greatly missed, but we shall enjoy your contributions for a long time to come, and I look forward to seeing you again when I visit Tunis."
​
Last month, Under Secretary Hormats visited Tunisia, where he highlighted some of the new government-to-government programs being undertaken by Tunisia and the United States. While in Tunis, Hormats linked up with a NUSACC business delegation, sending a strong message about America's commitment to public / private partnership in support of economic growth. 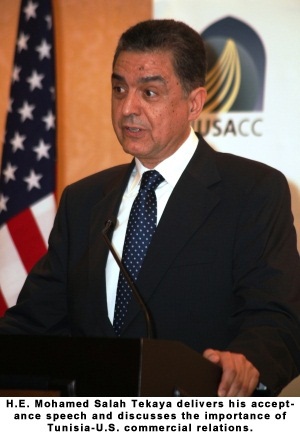 ​One of the U.S. companies that participated in the NUSACC delegation, Morganti, served as corporate sponsor of this year's Ambassador of the Year award. Michael Olenick, Vice President - Corporate Affairs for the Connecticut-based construction firm, said Morganti is "privileged to honor the service and distinguished career of Ambassador Tekaya."

Olenick continued, "Last month, Morganti joined the trade delegation organized by the National U.S.-Arab Chamber of Commerce. The firm's excitement over the trade mission led to an office in Tunis. I think, in all candor, that this is a credit to the Chamber and to the Government of Tunisia, as well as to the goodwill that was expressed during that trade mission. So, Morganti can now proudly include Tunis with all of our other offices."

Hon. Gordon Gray, who finished his tour as U.S. Ambassador to Tunisia earlier this month, also praised Ambassador Tekaya's commitment to Tunisia-U.S. relations. He said, "I want to thank you, Ambassador Tekaya, for all of the excellent work that you've done in a remarkable tour here in Washington. I've watched with admiration and respect as you've reinvigorated the bilateral relationship to a level where it really deserves to be."

Ambassador Gray also commended the Tunisian ambassador for his work "outside the beltway." He noted, "The fact that he's been named Ambassador of the Year by the National U.S.-Arab Chamber of Commerce speaks volumes, as does the fact that he's traveled so extensively throughout the United States. In my experience, I've found him to be a consummate professional, and we were able to collaborate on some very good projects together."

Ambassador Gray concluded, "On a personal level, all of us who know him recognize his warmth and kindness. Ambassador Tekaya, we want to wish you and your family all the best as you make the transition back home to Tunisia."

Ambassador Tekaya has actively supported numerous NUSACC programs designed to promote U.S.-Tunisia commercial relations. His involvement in NUSACC's recent "Greenfield" trade & investment mission to Tunisia played an instrumental role in the mission's success, including meetings arranged with the Prime Minister of Tunisia, H.E. Hamadi Jebali, and numerous ministers.
​
Under the auspices of the Embassy of Tunisia, NUSACC and the World Bank recently co-hosted a roundtable discussion featuring Tunisia's Minister of Investment & International Cooperation, H.E. Riadh Bettaieb, and Tunisia's Minister of Finance, H.E. Hassine Dimassi. The off-the-record discussion with some of Tunisia's most senior officials drew a capacity crowd at the headquarters of the World Bank. 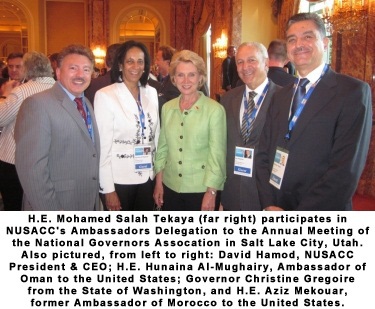 In cooperation with NUSACC, Ambassador Tekaya participated in the annual meeting of the National Governors Association, the collective voice of the nation's Governors. In the NGA's meeting in Salt Lake City, Utah, Ambassador Tekaya met with more than a dozen Governors, providing him with an opportunity to discuss Tunisia's democratic transition. The NGA meeting, he noted, "provided a unique opportunity to exchange views with many Governors on ways and means to develop closer relations with their respective states. The discussions were very useful and opened new prospects for cooperation in various sectors."

Ambassador Tekaya showcased Tunisia at a recent Arab "Ambassadors Forum" designed to promote trade & Investment between the United States and the Arab world. "Tunisia looks forward to attracting American investment, promoting trade and business opportunities, and establishing mutually beneficial partnerships with the United States," said Ambassador Tekaya. "The new Tunisia will strengthen good governance and transparency and will be an attractive place for business," he concluded.

Tunisia does not have oil & gas reserves like some of its neighbors, but it compensates for this lack of natural resources by boasting one of the best educated and most literate populations in the Middle East and North Africa (MENA) region. This international sophistication, coupled with the fact that Tunisia has been a constitutional republic for more than five decades, helps to explain that nation's relatively smooth transition from an autocracy to a free-wheeling democracy.

Trade has served as the lifeblood of Tunisia since the days of Carthage, and the Euro zone is responsible for approximately 75 percent of Tunisia's imports and exports. Despite this heavy dependence on European trading partners, Tunisia has expressed a strong desire to enhance its trade and investment ties to the United States. With this in mind, the Obama Administration is ramping up economic cooperation, beginning with a pledged infusion of $100 million and strong support for the following programs:
Last year, despite Tunisia's revolution, U.S. exports to that nation grew to $586.1 million. Top imports from the United States included agricultural products and food -- constituting $312 million in sales -- followed by chemicals, machinery, and metal manufacturing. The top five states exporting to Tunisia included Louisiana, Texas, Virginia, California and Connecticut. 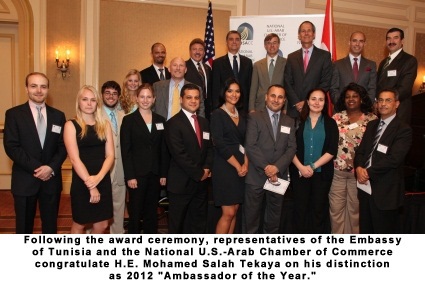 During the recognition ceremony, appropriately, the last word went to Ambassador Tekaya. "As my mission comes to a close, I have been honored to represent Tunisia in this friendly country," he said. "I have been privileged to serve at a crucial time in my country's transition to democracy and to have contributed, along with my Tunisian and American colleagues, to the new impetus that our bilateral relations are witnessing. I am grateful to the many friends and colleagues for their support, cooperation and understanding, which have facilitated my challenging mission, and I look forward to a prosperous Tunisian-U.S. partnership."
​
He concluded, "Our two countries share longstanding bonds of friendship and cooperation and now common values of freedom, dignity and democracy, and economic opportunity, and our partnership will grow stronger as Tunisia progresses on the path of democracy."
HOME | Privacy Policy | My Dashboard | About | Contact | Sitemap
Copyright © 2022, National U.S.-Arab Chamber of Commerce. All Rights Reserved