U.S.-ARAB CHAMBER HOSTS FIRST EVER AMBASSADORS FORUM
IN NORFOLK, VIRGINIA
​
Arab Ambassadors Highlight Business Opportunities
in the Arab World in a Time of Transition
Diplomats Include Site Visits to the Port of Virginia and
the North Atlantic Treaty Organization (NATO) 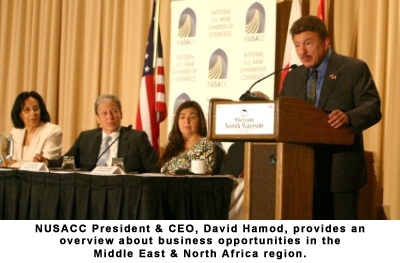 "Virginia is strategically important to the United States, generating more than $18 billion in merchandise exports last year," noted David Hamod, President & CEO of the U.S.-Arab Chamber. "Virginia is now one of America's top 15 exporting states to the Arab world, with more than $1.3 billion in goods shipped in 2011."

The Ambassadors Forum was sponsored by Lockheed Martin and supported by the Hampton Roads Chamber of Commerce, the Norfolk Department of Development, the Port of Virginia, and the U.S. Commercial Service. This year's event took place during the annual meeting of the National Governors Association -- held in Williamsburg, Virginia -- to which NUSACC led a high-level delegation of Arab ambassadors. 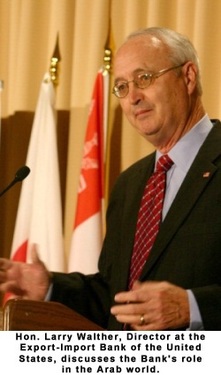 Export-Import Bank:
Increasing U.S. Jobs and Earning Money for U.S. Taxpayers
​​
Most of the companies attending the Forum were small and medium-sized enterprises (SMEs), and Director Walther highlighted a new service that the Bank provides exclusively for small businesses: Global Credit Express. The purpose of this pilot program, he said, is to offer "revolving lines of credit directly to small business exporters -- where loan sizes are too small to attract conventional bank finance. The point here is to get exporters up the credit ladder."

In fiscal year 2011, Director Walther noted, ExImBank authorized $33 billion in financing across 96 countries, supporting $41 billion in exports and 290,000 American jobs. The Bank's credit exposure in the Arab world at the end of FY 2011 approached $8.6 billion, led by the United Arab Emirates ($3.7 billion) and Saudi Arabia ($2 billion). Most exports to the Arab world financed by the Bank are in the transportation sector, but ExImBank also supports exports to the power, industrial, and petrochemical sectors.
​
The Export-Import Bank was recently reauthorized, Director Walther noted, and the Bank's capitalization was extended to $140 billion over the next three years. ExImBank garners "strong, bipartisan support," he concluded, because the American people recognize the value of a U.S. Government agency that "increases U.S. jobs, pays for itself, and earns money for taxpayers." 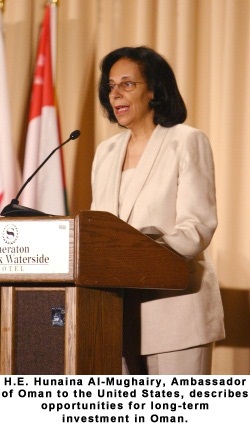 The Sultanate of Oman:
"One of the Most Progressive Countries in the Middle East"

In her remarks at the Forum, H.E. Hunaina Al-Mughairy, Oman's Ambassador to the United States, described the Sultanate as "one of the most progressive countries in the Middle East." The Arabian Gulf nation is "ideal for long-term investments," she said, "possessing a modern infrastructure, a strong industrial base, a stable government and, most notably, institutions that protect investors and ensure their access to the market."

Ambassador Al-Mughairy noted that Oman's Foreign Capital Investment Law has been liberalized, permitting 70 percent foreign participation in companies in most sectors and 100 percent foreign capital investment for projects of national importance. Oman's Law on Income Tax has been amended in recent years, she said, ensuring non-discriminatory treatment between Omani-owned companies and foreign companies incorporated in Oman. In the Ministry of Commerce & Industry, she pointed out, a "One-Stop-Shop" now exists to assist companies to cut through bureaucratic red tape.

Ambassador Al-Mughairy described Oman's business incentives as "unmatched . . . guaranteeing long-term objectives that serve the interests of the investor community." Such incentives include:
- Up to 100 percent foreign ownership.
- Soft loans with low interest rates and easy payback periods.
- Exemption from customs duties on imports of equipment.
- Relief from customs duties on raw materials for up to 10 years.
- No personal income tax.
- Corporate tax holidays of up to 10 years.
- Full repatriation of capital, net profit and royalties.
- Export credit insurance through Oman's Export Guarantee and Financing Agency.

Ambassador Al-Mughairy concluded, "Oman has worked at creating the right climate for new investments by developing a free, competitive economy with equal opportunities for all, and by shaping laws and regulations that encourage enterprise." 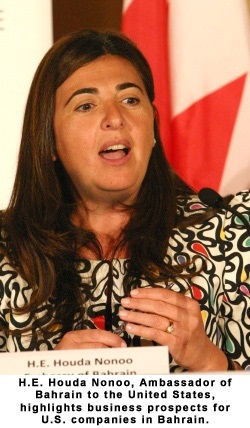 The Kingdom of Bahrain:
"The Possibilities for Economic Cooperation are Virtually Limitless"
​
H.E. Houda Nonoo, Bahrain's Ambassador to the United States, began her remarks by noting that her island nation has "worked hard to establish a modern, progressive, and business-friendly outpost in the Arabian Gulf. While Bahrain enjoys strong bilateral trade relations with many countries around the world, we are particularly proud of the strong commercial ties that we have forged with the United States."

Bahrain is home to the U.S. Navy's Fifth Fleet, Ambassador Nonoo said, and "works hand-in-hand with our American partners to safeguard regional shipping lanes and serve as a vanguard against common threats." However, she noted, the American-Bahraini alliance is much more than a mutually beneficial security relationship. "Our countries have enjoyed a productive and fruitful commercial partnership for many years," she pointed out, and in 2005, "Bahrain became the first country in the Arabian Gulf to conclude a Free Trade Agreement (FTA) with the United States."

This FTA, while providing significant opportunities for Bahraini businesses, also "generates export opportunities for the United States, supporting U.S. job creation for farmers and workers," she said. "Beyond the financial and economic benefits of this agreement, it supports Bahrain in our ongoing economic and political reform efforts." Today, she noted, U.S. exports to Bahrain total nearly $1 billion annually and Bahraini exports to the United States total almost $500 million -- nearly five percent of Bahrain's total exports.

The Bahraini Ambassador touted the advantages of doing business in her nation, including these incentives: "Businesses enjoy zero corporate taxes, the protection of an established legal system, the most transparent and business-friendly regulatory system in the region, intellectual property protection, global best-practice standards, low inflation, and no 'free zone' restrictions." She continued, "The cost of doing business is lower in Bahrain than elsewhere in the region, and living costs are low and wages are competitive. Bahrain also has the lowest taxes in the Gulf Cooperation Council (GCC) and has a well-trained workforce."

In recognition of the political unrest that has affected Bahrain in recent months, Ambassador Nonoo noted, "In Bahrain, we understand that our economic future depends on resolving our political differences. And while the past year has been a difficult one, I am confident that Bahrain is on the path to reconciliation."

"The possibilities for economic cooperation between our two countries are virtually limitless," she concluded. "Together with our friends and allies in the United States, Bahrain will continue to set a progressive example for the region and emerge stronger, freer, and more prosperous than before." 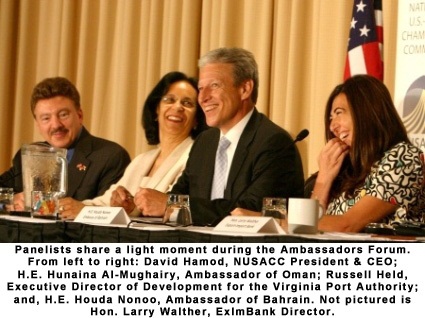 The Hampton Roads area, which includes Norfolk and other cities, has a population of 1.6 million and is the second largest metro area between Washington DC and Atlanta, Georgia. The U.S. military has a huge impact on the local economy, but other sectors are gaining ground. The region's growing Bioscience Research and Development base receives over $150 million per year in R&D funding, for example, spawning more than 35 companies.

The lifeblood of Hampton Roads courses through its ports. Over 95 percent of the world's shipping lines call on the Port of Hampton Roads, linking Virginia to almost 400 ports in more than 100 countries worldwide. Hampton Roads is home to the third largest port on the East Coast and the only port positioned for continuous expansion. Its "sister port," the Port of Virginia, boasts a foreign trade zone and is the largest intermodal facility on the U.S. East Coast.

The Ambassadorial delegation was invited to tour the Port of Virginia, a long-time member of the National U.S.-Arab Chamber of Commerce. Russell Held, Executive Director of Development at the Virginia Port Authority, welcomed the Ambassadors. "We are pleased that NUSACC chose to hold the Arab Ambassador Forum in Norfolk," he said. "Trade and investment opportunities with the Middle East and North Africa region continue to grow, and the Port of Virginia wants to help facilitate that growth."
​
One of the nation's largest railroads, Norfolk Southern, headquartered in Norfolk, has extensive rail infrastructure throughout the Commonwealth of Virginia. These lines link to markets in 22 Eastern states and Canada via 21,500 route miles. 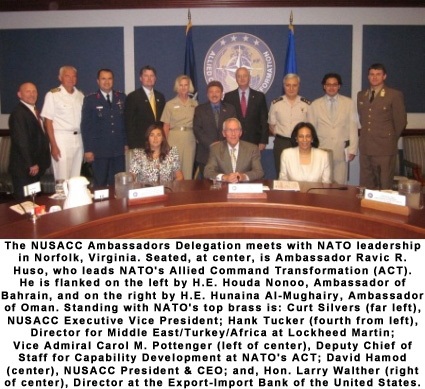 ​Norfolk is also home to the Allied Command Transformation (ACT) of the North Atlantic Treaty Organization (NATO), the only permanent NATO base outside of Europe and one of two NATO Strategic Commands in the world. (The Allied Command Operations, based in Belgium, is responsible for the strategic, operational, and tactical management of combat and combat support forces of the NATO members, while the Allied Command Transformation -- based in Norfolk, Virginia -- is responsible for the induction of new member states' forces into NATO, as well as NATO forces' research and training capability.)

Leaders of NATO's Allied Command Transformation -- led by Ambassador Ravic R. Huso (Political Advisor) and Vice Admiral Carol M. Pottenger (Deputy Chief of Staff for Capability Development) -- hosted a roundtable discussion for the Ambassadorial delegation. The discussion addressed a wide range of topics, including NATO's growing partnerships around the world, as well as NATO's higher profile in the Middle East and North Africa since the onset of the Arab Spring.


"The delegation's site visits to the Port of Virginia and NATO's Allied Command Transformation were very impressive," said David Hamod, President & CEO of the U.S.-Arab Chamber. "From the beginning of our visit to the very end, Norfolk and the Hampton Roads community were exceptionally hospitable and very receptive to insights generated during the Ambassadors Forum."

The appreciation appeared mutual. Eric McDonald, Director of the U.S. Commercial Service in Richmond, said, "Partnering with the Chamber on this event provided an excellent opportunity for Virginia companies to learn more about exporting to the Middle East." The City of Norfolk expressed its appreciation to NUSACC for recognizing that city's "unique assets and contributions to international commerce."
​
Jack Hornbeck, President & CEO of the Hampton Roads Chamber of Commerce, said: "We were pleased to partner with the National U.S.-Arab Chamber of Commerce in support of the Ambassadors Forum. This event helped to facilitate economic development opportunities for our business community throughout the Middle East and North Africa region." Concluded H.E. Hunaina Al-Mughairy, the Omani Ambassador, "Connecting to potential business partners in Virginia through this Forum has been a tremendous opportunity."
HOME | Privacy Policy | My Dashboard | About | Contact | Sitemap
Copyright © 2022, National U.S.-Arab Chamber of Commerce. All Rights Reserved