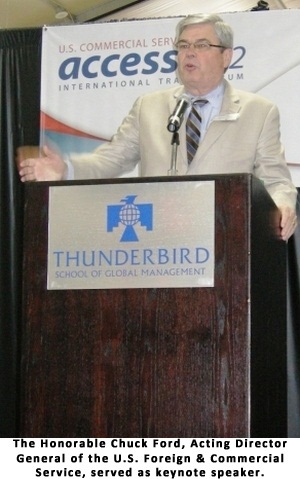 Senior Commercial Officers from eleven Arab countries have just concluded a two-day conference at the Thunderbird School of Management in Arizona that was attended by over 250 American companies. ACCESS 2012, the third conference of its kind convened by the U.S. Department of Commerce, brought together U.S. Government commercial representatives in Algeria, Egypt, Iraq, Jordan, Kuwait, Lebanon, Libya, Morocco, Qatar, Saudi Arabia, and the United Arab Emirates. The National U.S.-Arab Chamber of Commerce (NUSACC) served as a Silver Sponsor of the event, the third consecutive year in which NUSACC has served as a sponsor and made presentations to the U.S. business community.

David Hamod, President & CEO of the U.S.-Arab Chamber, noted, "Our Chamber is privileged to be part of this important event, one which adds value to our members by bringing U.S. commercial officers face-to-face with U.S. companies looking to do business in the Middle East and North Africa (MENA) region. This conference is certainly one of the highlights of NUSACC's extensive relationship with the U.S. Department of Commerce."

ACCESS 2012 provided an opportunity to explore some of the world's fastest growing economies. The annual event helps U.S. companies to identify new export markets in Africa, the Middle East, and South Asia, and to obtain the resources and market strategies necessary to succeed in these emerging markets.

Acting Director General of the U.S. Foreign & Commercial Service, the Honorable Chuck Ford, served as keynote speaker. Ambassador Ford looked ahead at changing global trade, investment, and supply patterns and invited attendees to continue engaging with the Department of Commerce and other agencies to ensure U.S. business gets the service and support it needs to be successful globally. He thanked NUSACC and other ACCESS sponsors, "without whom this week's engagement would not have been possible." 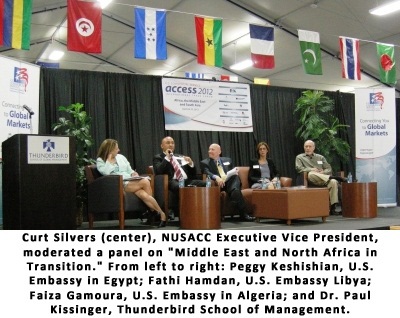 ​According to the U.S. Department of Commerce, U.S. exports reached $2.1 trillion in 2011 -- the highest total value in U.S. history -- and supported roughly 10 million American jobs. Growth in the Middle East and North Africa was representative of this trend, posting significant gains over the past year, despite the onset of the Arab Spring. According to data analyzed by NUSACC, U.S. goods exports to the Arab world increased from $48.77 billion in 2010 to $56.18 billion in 2011, an increase of 15.2 percent and the highest single-year sales volume ever.

Riding on the strength of commercial and military aircraft sales, the largest category of goods exported was Transportation Equipment, constituting $17.58 billion (31.3 percent) of total U.S. goods shipped to the Arab world. Other "Top Five" export sectors included Non-Electrical Machinery ($7.53 billion, 13.4 percent), Agricultural Products ($4.97 billion, 8.85 percent), Computer & Electronic Products ($4.21 billion, 7.5 percent), and Food & Kindred Products ($3.44 billion, 6.12 percent). The MENA region is not the largest market in the world for U.S. companies, but it is certainly one of the most strategic.

NUSACC's Executive Vice President, Curt Silvers, represented the Chamber at ACCESS 2012 and served as moderator for a panel focused on the "Middle East and North Africa in Transition." The panel was comprised of:


"The Arab Spring has affected every country in the region in different ways, but it has meant more than just chaos and instability," Silvers noted. "As many participants have observed, the Arab Spring has also created opportunities through economic reforms, increased transparency, and the opening of markets that had largely been closed, such as Libya."
​
"Despite the economic turbulence of the past year," Silvers concluded, "we are very encouraged by the upswing in U.S. exports, and we are cautiously optimistic that America's export trends to the region will continue to move in the right direction."
HOME | Privacy Policy | My Dashboard | About | Contact | Sitemap
Copyright © 2022, National U.S.-Arab Chamber of Commerce. All Rights Reserved