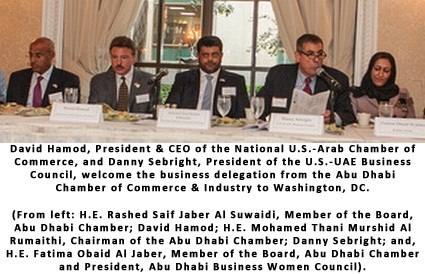 The National U.S.-Arab Chamber of Commerce (NUSACC) and the U.S.-U.A.E. Business Council hosted a high-ranking delegation from the Abu Dhabi Chamber of Commerce and Industry (ADCCI) for a luncheon and discussion in Washington, DC on Thursday. The delegation, led by ADCCI Chairman His Excellency Mohammed Thani Murshed Al Romaithi, included members of the organization's Board of Directors, prominent business executives from Abu Dhabi, and senior officials from the Chamber. The event attracted upwards of 200 private and public sector representatives from American and Emirati organizations and the broader Washington, DC business and policy community.

David Hamod, President and CEO of the National U.S.-Arab Chamber of Commerce, and Danny Sebright, President of the U.S.-U.A.E. Business Council, opened the luncheon with welcome remarks underscoring the importance of the delegation's United States visit to the overall advancement of commercial ties between the U.S. and a key Arab commercial and diplomatic partner, the United Arab Emirates (U.A.E.).
​
Following the welcoming comments, the delegation was introduced and His Excellency Al Romaithi delivered opening remarks. In his address, His Excellency Al Romaithi presented the audience with a clear picture of the current investment and commercial landscape in Abu Dhabi, citing the Emirate's ambitious economic diversification strategy, Abu Dhabi 2030, as the driving force behind its development. Further, Chairman Al Romaithi underscored the importance of partnerships with American firms and partners around the world to the realization of Abu Dhabi's economic development goals. 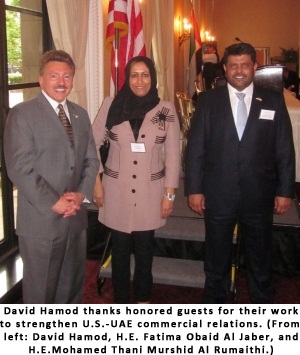 "We are in the United States this week to meet with government and industry, survey partnership and investment opportunities, and to deliver the message that Abu Dhabi is a growing global commercial player with ambitious economic development goals," said His Excellency Al Romaithi.

Following Chairman Al Romaithi's comments, Her Excellency Fatima Al Jaber, Board Member of ADCCI and Chief Operating Officer of Al Jaber Group, provided guests with background about the mission and work that ADCCI does to promote business in Abu Dhabi, a growing commercial hub and international link between the Eastern and Western hemispheres. She also spoke to the important role of business in the Emirates, citing that women make up 60 percent of the public sector workforce in the U.A.E. and own small and medium-sized business across several economic sectors vital to the growth of the country's economy.
​
Following Chairman Al Romaithi and Her Excellency Al Jaber's remarks, the floor was opened for an off-the-record panel discussion between Board Members of the ADCCI delegation and the audience. Audience members were given the opportunity to engage directly with senior commercial decision-makers and global investors from Abu Dhabi. Further, they were given the opportunity to discuss commercial issues and ask questions about the social and business climate in the U.A.E.
"The event provided a platform for senior officials from the Abu Dhabi Chamber to inform American business and policy decision-makers about their continued interest in American products and partnership," said Hamod. "The delegation's visit presents an important opportunity to advance the U.S.-U.A.E. commercial relationship and for the delegates to expand their current partnerships with American industry," added Sebright. 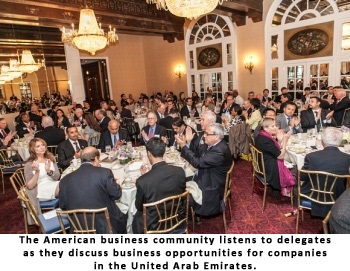 The delegation will spend the remainder of the week in Washington, DC conducting meetings with government officials and industry executives. Next week, delegates will travel to Houston for the Offshore Technology Conference (OTC) and to attend sideline meetings and events before wrapping up the trip in Chicago. The trip is supported by the U.A.E. Ministry of Foreign Trade and the Trade & Commercial Office at the U.A.E. Embassy in Washington, D.C.

About the National U.S.-Arab Chamber of Commerce (NUSACC):

The National U.S.-Arab Chamber of Commerce (NUSACC), established over 40 years ago, is America's longest serving organization dedicated to U.S.-Arab business. NUSACC is widely regarded as the voice of American business in the Arab world and the premier private sector portal to the United States for Arab commercial enterprises.

The National U.S.-Arab Chamber of Commerce is the only business entity in the United States that is officially recognized and sanctioned by the League of Arab States and the General Union of Arab Chambers of Commerce, Industry, and Agriculture. As such, NUSACC is a "sister chamber" and partner to the national chambers of commerce throughout the Arab world.
With offices in New York, Houston, Los Angeles, Salt Lake City, and its headquarters in Washington DC, NUSACC is the only chamber of its kind to provide "coast-to-coast" service. This nationwide coverage means that NUSACC is well positioned to serve its members in all 50 States and to provide outreach capabilities to all of America's major markets.
Website: www.nusacc.org

About the U.S.-U.A.E. Business Council:

The U.S.-U.A.E. Business Council is a progressive business advocacy organization solely committed to the advancement of the trade and commercial relationship between the United States and the United Arab Emirates. The Business Council actively works to ensure that the U.S. and U.A.E. remain attractive destinations for foreign direct investment by conducting effective policy advocacy, undertaking various trade promotion initiatives, providing ongoing updates on the business climate in both countries, and helping develop strategic relationships between U.S. and U.A.E. business and government officials.
​
Website: www.usuaebusiness.org
HOME | Privacy Policy | My Dashboard | About | Contact | Sitemap
Copyright © 2022, National U.S.-Arab Chamber of Commerce. All Rights Reserved