The National U.S.-Arab Chamber of Commerce (NUSACC) and the Center for International Private Enterprise (CIPE) today hosted a roundtable discussion featuring the Hon. Gerald Feierstein, U.S. Ambassador to the Republic of Yemen. This was Ambassador Feierstein’s first such discussion with the U.S. business community since assuming his position in Sana’a in September 2010, and the roundtable session comes on the heels of Secretary of State Hillary Clinton’s recent trip to Yemen -- the first visit to that nation by a U.S. Secretary of State in more than two decades. The "standing room only" crowd of business, government, and civil society leaders reflects increased interest in Yemen among U.S. policymakers.
"CIPE is pleased to see focus on supporting democratic development through free and fair elections and through institutional reform," said Abdulwahab Al-Kebsi, CIPE’s Regional Director for Africa and the Middle East. "These are key ingredients to enable an environment for economic growth and job creation."
"When it comes to promoting entrepreneurship, Yemen has great potential," stated David Hamod, President & CEO of NUSACC. "Youth make up more than 50 percent of that nation’s population, and Yemenis are keenly interested in job creation. We are hopeful that through our Chamber’s programs, there is a role for U.S. entrepreneurs to work hand-in-hand with their Yemeni counterparts."
Feierstein highlighted recent efforts to work with the Government of Yemen to promote greater private sector engagement. "There's no doubt in our mind, at the end of the day, that the engine for economic growth and prosperity for Yemen, like everywhere in the world, is going to be the private sector," noted Feierstein. "We believe that the Yemeni private sector is well-positioned and eager to take on a bigger role in Yemen’s economy."
Feierstein mentioned several ways that America’s private sector could support entrepreneurship and job creation in Yemen, including professional training, vocational training, and promoting business-oriented educational opportunities. He also stressed the importance of creating an environment in Yemen that encourages local and foreign direct investment, including that from Gulf Cooperation Council (GCC) nations. 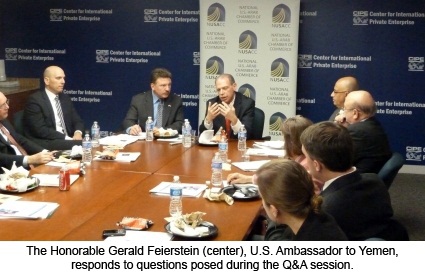 The U.S. Ambassador to Yemen noted the growing importance of tourism as a source of revenues and prospective investment. This sector has the potential to be "hugely lucrative and valuable," he said, providing Yemen with an opportunity to tout its "history, traditions, and culture." Yemen boasts more than 1,000 miles of largely undeveloped coastline, offering great potential for tourism development. This striking scenery prompted The New York Times to select Yemen - an "Arabian Oasis for the Intrepid" - to be its Adventure Destination of the Year in 2006.
Yemen is planning Parliamentary elections this spring, and the United States is keen to see a "fair, free, credible, and legitimate election process," suggested Feierstein, one that lends itself to "broad participation by all parties." Resolution of Yemen’s political issues is seen as "setting the stage for taking on the economic issues that are of greatest concern to the majority of the Yemeni people: unemployment, lack of opportunity, lack of optimism for the future among young Yemenis, poverty, and some of the social consequences, including a lack of education and a lack of adequate healthcare."
Feierstein admitted that the United States "does not have all the answers" to Yemen’s challenges, but he is encouraged by signs that Yemen is "making progress and moving in the right direction." At the end of the day, he suggested, the United States intends to be a "long-term partner for Yemen, recognizing that there’s a relationship between our success in resolving the political and economic challenges and our success in minimizing -- and hopefully eliminating -- the threat of violent extremism. Yemen is strategically located as a lynchpin for security and stability in the region."
HOME | Privacy Policy | My Dashboard | About | Contact | Sitemap
​Due to COVID-19,  and in the interest of public safety, walk-in service at NUSACC is temporarily suspended. Because our clients deserve the best possible service, certification services will continue to be offered by MAIL.