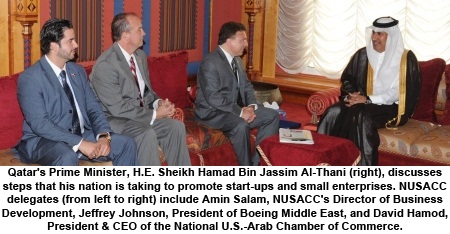 The National U.S.-Arab Chamber of Commerce (NUSACC) today concluded a highly successful executive trade and investment mission to the Sultanate of Oman and the State of Qatar. The week-long visit to the two Middle East and North Africa (MENA) nations showcased U.S. companies, headquartered in 11 different states, whose revenues last year totaled $130 billion. The high-level mission is consistent with the Obama Administration's National Export Initiative, which aims to double U.S. exports by the year 2015, with a special focus on small and medium-sized enterprises (SMEs).
​
"We are grateful to our Qatari and Omani hosts for receiving us at the highest levels," stated David Hamod, President and CEO of the U.S.-Arab Chamber. "This is a reflection of the close relations between our respective nations, as well as the strong desire to do business deals, promote economic growth, and create jobs within the private sector." 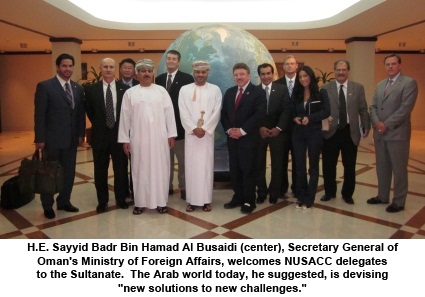 ​The Chamber's partners for this visit included the U.S. Embassies in Oman and Qatar, the Qatari and Omani Embassies in the United States, the Omani and Qatari Chambers of Commerce and Industry, and the Muscat-American Business Council.

"I commend the National U.S.-Arab Chamber of Commerce for bringing an important, high-level business delegation to Qatar," noted Hon. Joseph LeBaron, U.S. Ambassador to the State of Qatar. "It reflects a strategic vision by both the U.S. Government and the private sector to expand and deepen our economic partnership with such an important market like Qatar. When the private sector and U.S. Government work together, as exemplified by the delegation's visit to Qatar, U.S.-Qatar trade and investment relations benefit. That, in turn, helps move both nations toward a more prosperous, secure future."
​
Some of the key sectors represented in the delegation include construction and engineering, information and communications technology (ICT), aerospace and aviation, infrastructure development, multi-modal transportation, defense and security, media, education, and healthcare. 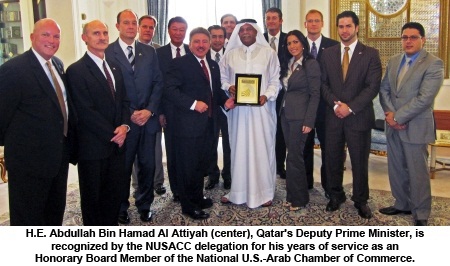 ​Boeing, one of two Fortune 50companies participating in the mission, describes Qatar as a key market "today and over the next 20 years. With expected growth at key customers like Qatar Airways & the Qatar Emiri Air Force, Boeing is very focused on growing its partnership with Qatari customers, government institutions, and industry."

Delegation member Jeffrey Johnson, President of Boeing Middle East, commended the National U.S.-Arab Chamber of Commerce for the highly successful visit to the two Arabian Gulf nations. "The delegation's meetings with the Prime Minister, the Deputy Prime Minister, and other key leaders will pay off for Boeing's business going forward," he said. "Boeing's partnership with NUSACC continues to help us grow relationships and open doors throughout the MENA region."
​
Similar sentiments were expressed by another delegation company, Booz Allen Hamilton, one of America's leading consulting firms with more than 25,000 employees. Mark Fowler, Director of Business Development - Middle East, noted that Booz Allen Hamilton is "entering the Middle East in a big way. While we enjoy solid relationships and brand recognition throughout the region, the professionalism and ability of NUSACC to facilitate introductions at the highest levels of government in the region is indeed very impressive." Booz Allen Hamilton has opened its first regional office in Abu Dhabi, United Arab Emirates.

​Most of the U.S. firms participating in the delegation were specialized small and medium-sized enterprises offering goods and services that are in demand in the Gulf Cooperation Council (GCC) nations.
​
Matthew Charkhar, President of Tennessee-based Harmony Medical Solutions, said that the trade mission "provided me with key contacts in the medical equipment market, through which I have already received potential business opportunities. Getting key contacts through functions in the U.S. Embassies in Muscat and Doha will also be very helpful to further refine our search for business partners. I cannot imagine how I could have possibly connected to such large potential business partners on my own. In fact, I should have taken the initiative to work with NUSACC much earlier." 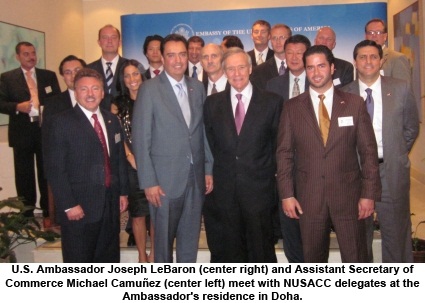 ​He concluded, "I enjoyed meeting and spending time with all the delegates, and I will cherish the relationships that I have developed with the team during the last eight days."

Virginia-based Alpha Corporation, one of America's top 50 Program Management & Construction Management firms, has been doing business in the region for more than 20 years -- but not in Oman or Qatar. Jeffrey W. Lindsey, President & CEO, noted, "Alpha Corporation thoroughly appreciated the opportunity to participate in this Executive Trade Mission. As a result, we have identified a number of business opportunities in both Qatar and Oman. NUSACC's relationships in the region greatly assisted in identifying these business opportunities."
​
U.S. exports to the MENA nations are expected to grow to $117 billion by the year 2013, according to a recent report produced by NUSACC. 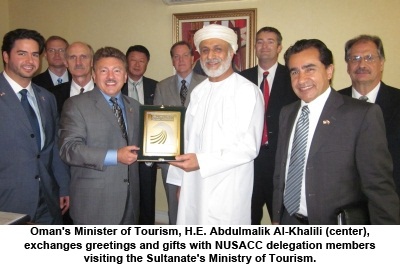 ​The State of Qatar has emerged as the Arab world's most competitive economy, according to the World Economic Forum, with massive infrastructural expansion through the year 2030 and beyond. Qatar was recently selected by the International Federation of Association Football (FIFA) to host the 2022 World Cup, an event that will drive more than $100 billion in projects revolving around sports and conference facilities, roads, bridges, highways, railways, ports and a wide range of consultancy services.

In addition to offering these "bricks and mortar" opportunities, Qatar is making important strides in converting its hydrocarbons-centered economy to one based on knowledge. The Qatar Foundation, for example, has established Education City, which hosts six top U.S. universities. Moreover, Doha has launched a wide range of related initiatives -- such as ictQatar, Silatech, and Enterprise Qatar -- that are designed to generate economic growth and build capacity among Qatar's youth.
​
The Sultanate of Oman is America's most steady, secure Free Trade Agreement (FTA) partner in the Arabian Gulf. On the strength of this FTA, U.S. exports to the Sultanate of Oman are expected to rise to over $3 billion annually by 2013 -- vaulting Oman into the number eight position on America's list of top export destinations in the Arab world. 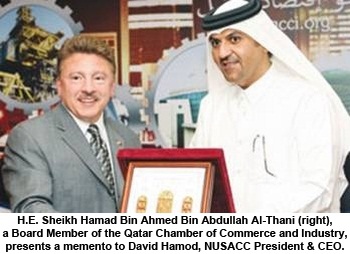 ​
Oman's new five-year plan anticipates investment outlays of nearly $80 billion, more than doubling those of the previous five-year plan. Consistent with the nation's "Vision 2020" development plan through the year 2020, the new five-year plan is designed to accelerate Oman's economic diversification away from dependence on oil and gas. To that end, the plan targets growth opportunities in industry and infrastructure, with a special focus on tourism, agriculture, fisheries, and the financial sector. Expenditures on education and health alone will be 55 percent and 88 percent higher, respectively, than those in the 2005-2010 plan.
​

"The delegation's visit was a huge success," concluded David Hamod, the Chamber's President and CEO. "We are very grateful to the government and business leaders who went out of their way to support this initiative. Our delegates gained firsthand knowledge about important projects in these two nations and, at the end of the day, I am confident that our companies will sign deals as a result of this visit."
HOME | Privacy Policy | My Dashboard | About | Contact | Sitemap
Copyright © 2022, National U.S.-Arab Chamber of Commerce. All Rights Reserved