Arlington, VA - The National U.S.-Arab Chamber of Commerce (NUSACC) and the Northern Virginia U.S. Export Assistance Center (USEAC) have just concluded a highly successful half-day seminar on trade and investment opportunities in Iraq. The event, which drew a standing-room-only crowd of U.S. exporters and investors, highlighted more than $150 billion in prospective infrastructure opportunities in such sectors as housing, power generation, medical services, tourism, telecommunications, transportation, and industrial development.
"U.S. exports of goods and services to Iraq are on track to nearly triple during the period 2009 ($3.06 billion) to 2013 ($8.53 billion)," said David Hamod, NUSACC’s President & CEO. Exports of U.S. services are slated to grow faster than U.S. merchandise exports through 2013, he noted, and America’s market share in services in Iraq is expected to grow to 24 percent by 2013. "Nowhere else in the Middle East and North Africa (MENA) region do we see that level of exponential growth. If the economy continues to grow at this pace, Iraq will become America’s fourth largest market in the Arab world within three years." 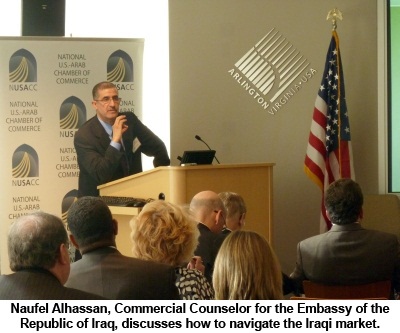 Keynote speaker Naufel Alhassan, Commercial Counselor at the Embassy of Iraq in the United States, provided the audience with an analysis of the Iraqi business environment, offering suggestions on how U.S. businesses may successfully navigate this promising market.
Based on the Iraqi National Development Plan (2010-2014), Alhassan indicated that Iraq is striving to create 3-4.5 million jobs and increase private sector participation by 46 percent. At the present rate of 2.6 percent annual growth in population, Iraq will need between 2-3 million new housing units by 2015. Electricity consumption has grown by 15 percent each year, and Iraq’s power generation capacity is already less than half of current demands. Such projects, and many more in health care, telecommunications, transportation, and tourism, among others, will need equipment, personnel, training, and management.
Alhassan admitted that Iraq is still emerging from a controlled economy "run by dead dictatorships" - with high unemployment, heavy dependency on oil, and a weak private sector - but he expressed great optimism about the road ahead. "We foresee excellent opportunities for American companies - large, medium, and small - to create joint ventures with new Iraqi companies in all sectors," he concluded.
Following remarks by Hamod and Alhassan, the seminar proceeded with two panel discussions led by U.S. Government officials from the Departments of Commerce and State, the Export-Import Bank of the United States (Ex-Im Bank), and the Overseas Private Investment Corporation (OPIC). The final presentation was offered by the U.S.-Iraq Business Dialogue, a government-to-government entity designed to enhance the business environment and eliminate trade barriers between the two nations.
Kevin Reichelt, Desk Officer for Iraq, and Linda Le, an International Trade Specialist focusing on Iraq, provided a U.S. Department of Commerce perspective. Reichelt noted, "I have always been struck by the optimism and the spark of entrepreneurship that I have witnessed from Iraqi business leaders, both men and women, and it is really an exciting time to be doing business in Iraq." Le, who has also worked extensively with the Iraqi business community, stated that "relationships are very important and, in my experience, Iraqis are very generous." 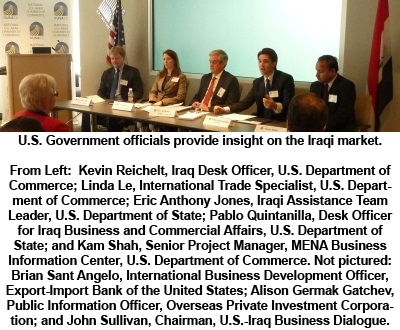 ​Reichelt and Le highlighted many of the efforts being made to transition Iraq from a controlled to a market-driven economy. In addition to working towards World Trade Organization (WTO) accession, the country is in the process of privatizing many of its 192 State-Owned Enterprises (SOEs), which together employ over 500,000 Iraqi citizens. Furthermore, an amendment to the National Investment Law now allows limited foreign ownership of land, and Iraq is establishing a new commercial court to promote dispute resolution. All of these efforts, and more, are making Iraq an increasingly attractive destination for U.S. exports and investments.
Kam Shah, Senior Project Manager of the MENA Business Information Center at the U.S. Department of Commerce, suggested that "Iraq is a growth market for the U.S. companies in multiple industry sectors, and now is the time to tap into this market." He talked about meeting Iraqi delegations when they visit the United States, and he recommended accessing the International Partner Search of the U.S. Department of Commerce.
Pablo Quintanilla, State Department Desk Officer for Iraq Business and Commercial Affairs, will be heading to Iraq later this year. He focused his remarks on the long-term partnership envisaged in the Strategic Framework Agreement and the gradual transition from a military environment to a civilian environment. He noted, "The U.S. Government is helping U.S. companies enter the Iraqi market and grow their existing operations there via the U.S.-Iraq Business Dialogue, by leading trade missions to Iraq, and by providing financing opportunities through OPIC and Ex-Im Bank." 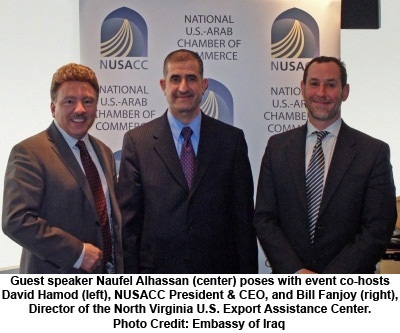 ​Eric Anthony Jones, Iraq Assistance Team Leader at the U.S. Department of State, focused on America’s desire to support a "stable, sovereign, self-reliant and prosperous" Iraq. He highlighted the importance of having a physical presence on the ground in Iraq - "a virtual presence in Iraq is no presence at all" - and he walked the audience through positive developments in Iraq’s new information and communications technology (ICT) law, noting that cell phone penetration in Iraq is among the highest in the region.
Jones concluded, "The U.S. State Department works closely with the Department of Commerce and other U.S. Government agencies to encourage the Government of Iraq to implement reforms aimed at creating a business environment conducive to foreign and private investment, open markets, transparent government procurement procedures, and strong independent regulators."
Brian Sant Angelo, International Business Development Officer at Ex-Im Bank, and Alison Germak Gatchev, Public Information Officer at the Overseas Private Investment Corporation, offered insights into financing for U.S. exports and investments in Iraq. OPIC opened in Iraq in 2005, while Ex-Im opened its offices there in July 2010.
Sant Angelo focused on risk mitigation strategies and buyer financing opportunities through loan guarantees and direct loans. He placed special emphasis on innovative ways that Ex-Im has been lowering costs to U.S. companies ("sponsors") looking to do business in Iraq. He concluded, "There are opportunities available for U.S. exporters to support various infrastructure initiatives in Iraq. Ex-Im Bank remains committed to developing the necessary partnerships with the Government to participate in these projects with quality U.S. goods and services." 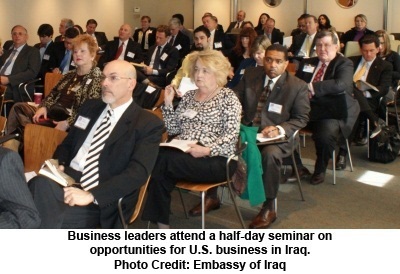 ​Gatchev noted that U.S. companies look to OPIC for support primarily on investing or contracting, and OPIC is well positioned to help through its political risk insurance and/or long-term financing. She added, "OPIC offers services to aid in investment and contracting, helps to create an environment that helps U.S. businesses deal with political risks, and can handle a variety of different investment and risks - projects ranging from small business to large structured deals." OPIC can offer financing up to 60 percent of the deal, she said, with the remaining 40 percent to be raised by the private sector as equity.
John Sullivan, Chairman of the U.S.-Iraq Business Dialogue, which began in July 2006, emphasized the important role to be played by private/public cooperation. It is important to have an Iraqi partner on the ground, he suggested, and that U.S. companies looking to do business in Iraq need two things: persistence and perspective.
"American companies also need to exercise patience," concluded NUSACC’s David Hamod, who emphasized the need to ‘Know Your Customer’. "Iraqis have been doing business with international visitors for thousands of years, and we need to adjust to their schedules and traditions, not the other way around. It’s safe to say that in the cradle of civilization, things take time."
HOME | Privacy Policy | My Dashboard | About | Contact | Sitemap
Copyright © 2022, National U.S.-Arab Chamber of Commerce. All Rights Reserved