Qatar: Investing in the Future
New Report by U.S.-Arab Chamber Focuses on
Business Opportunities in the State of Qatar

The National U.S.-Arab Chamber of Commerce (NUSACC) today released a special issue of its quarterly journal, U.S.-Arab Tradeline, focused on the State of Qatar.
"The State of Qatar, by winning the right to host World Cup 2022, has captured the attention of the world," says David Hamod, President & CEO of the U.S.-Arab Chamber. "Qatar is laying groundwork for $100 billion in infrastructure-related investments in coming years, and this special issue of U.S.-Arab Tradeline captures the essence of those business opportunities."
The journal is divided into the following segments: Profiles of Qatar's leadership, including H.H. the Emir, Sheikh Hamad bin Khalifa Al Thani; exclusive interviews with the U.S. Ambassador to Qatar and the Qatari Ambassador to the United States; Qatar's current infrastructure boom; the energy profile of Qatar, the largest producer of liquefied natural gas (LNG) in the world; the Qatar Foundation and Education City, hosting local campuses of six leading U.S. universities; Qatar's commitment to Arab and Islamic cultural institutions; and the emirate's humanitarian initiatives around the globe. Some of the sectors featured in this special issue include construction/engineering, information and communications technology (ICT), aerospace, defense & security, sports, and leisure.
The journal's introductory section, entitled "Qatar: Investing in the Future," states, "Whatever Qatar lacks in size, it makes up for in spirit. No comparably-sized nation in the world has such an outsized impact around the globe on diplomacy, the economy, and Arab culture." The journal goes on to say that "investing in the future is the essence of the Qatar Model. The emirate is investing billions of dollars to make the transition from a hydrocarbon-based economy to a knowledge-based economy." 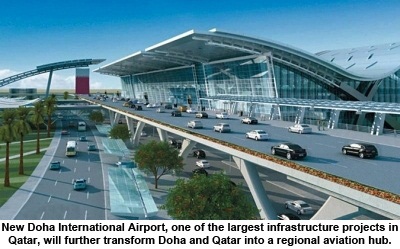 ​Of particular interest to U.S. companies are infrastructure projects. Tradeline divides these into public works, Doha's new international airport, seaports, railways, world cup stadiums, hotels, ICT development, and power and water.
According to the U.S. Commercial Service at the U.S. Embassy in Doha, top sectors in Qatar (in descending order) include infrastructure ($71.7 billion), construction ($43.8 billion), gas processing ($16.1 billion), power ($15.2 billion), petrochemicals ($14.6 billion), water and wastewater ($6.6 billion), fertilizer ($4.5 billion), oil & gas production ($3.8 billion), LNG ($2.5 billion), refining ($1.7 billion), alternative energies ($1.0 billion), pipelines ($.9 billion), industrial ($.5 billion), and metal ($.3 billion).
Qatar's Ambassador to the United States, H.E. Ali bin Fahad Al-Hajri, notes that the "2022 World Cup will undoubtedly accelerate major investment projects set forth in Qatar's National Vision 2030 development plan, which will require huge investments. Because Qatar is a free and open market, this will be a very competitive process.  We have a transparent business system; according to Transparency International, Qatar has secured the highest ranking in the Middle East in terms of transparency and is ranked 19th worldwide." As Ambassador, he concludes, "I invite and encourage American companies to enter the competition for these projects. U.S. companies should take advantage of the special relationship that Qatar enjoys with the United States and is reflected between our two peoples."
The U.S. Ambassador to Qatar, Hon. Joseph LeBaron, concurs: "American companies are well positioned to play a large role in supporting Qatar's World Cup 2022 infrastructure projects. When you consider the time and quality factors at play for these megaprojects, U.S. firms have a track record of delivering world-class projects on time, on budget, and on benefit." He concludes, "It will be a very good thing for the fastest growing economy [Qatar] and the largest economy to be able to sit down and compare notes on goals and aspirations, to seek greater transparency, and to enhance communications and friendship."
This issue of Tradeline highlights some of Qatar's outsized impacts: its ability to find diplomatic solutions around the region to seemingly intractable conflicts; its remarkable rise to become the world's largest exporter of liquefied natural gas in less than 15 years; its outreach to hundreds of millions of viewers through the medium of Al Jazeera; its drive to establish itself as a global repository for Arab and Islamic art; its unselfish commitment to serve humanitarian causes and crises around the world; its ability to maintain friendly relations with just about every nation and regime under the sun; and, most recently, its come-from-behind victory to host the 2022 World Cup, the first Arab or Muslim nation in history to do so. 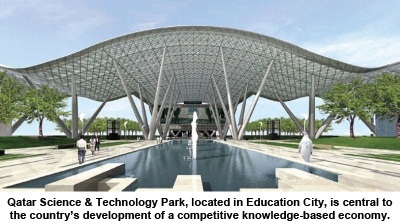 ​Education City, the centerpiece of Qatar's efforts to build capacity among its youth, brings to Doha some of the world's best universities. But in the same way that Education City provides a window for Qataris, it also provides a window to Qataris. It gives Americans and others an opportunity to get to know Qatar, and Arab culture in general, at a time when there is still widespread misunderstanding about Arabs and Muslims. In this regard, the intellectual and cultural bridge that Qatar's leadership is constructing may have as much impact on the international community as it does on Qatar's own citizens.
"At the end of the day," concludes David Hamod, NUSACC's President & CEO, "Qatar's investment in a knowledge-based economy is about job creation, becoming global citizens, and seeking a better quality of life for coming generations."
HOME | Privacy Policy | My Dashboard | About | Contact | Sitemap
Copyright © 2022, National U.S.-Arab Chamber of Commerce. All Rights Reserved