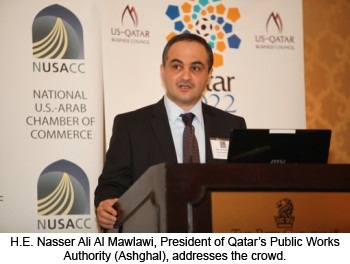 Washington DC - At a breakfast today for more than 100 U.S. business leaders, a high-level delegation of senior officials from Qatar’s Public Works Authority (Ashghal) highlighted that agency’s upcoming megaprojects as the country prepares to host the 2022 World Cup. H.E. Nasser Ali Al-Mawlawi, President of Ashghal, noted, "We are really looking forward to all the different entities within the United States participating in this development of infrastructure in Qatar."
The event -- co-hosted by the National U.S.-Arab Chamber of Commerce (NUSACC), the U.S. Commercial Service, and the U.S.-Qatar Business Council (USQBC) -- highlighted a wide range of business opportunities for U.S. companies. Qatar plans to spend an estimated $100 billion in infrastructure projects between now and the World Cup in 2022. Approximately $20 billion of this development will be focused on roads, bridges, wastewater treatment, and related consultancy services that fall under the purview of the Public Works Authority.
The delegation was introduced by David Hamod, President & CEO of the National U.S.-Arab Chamber of Commerce, who co-introduced the delegation on behalf of Ambassador Patrick Theros, President & Executive Director of the U.S.-Qatar Business Council. "The 2022 Gold Rush has begun and excitement in Doha is now at fever pitch," stated Hamod. "This is a remarkable opportunity for U.S. companies, but given the intense competition that American firms will face from all over the world, winning major projects will not be a cakewalk."
Ambassador Patrick Theros, U.S. Ambassador to Qatar from 1995 to 1998, stated, "The discussion and opportunities highlighted today will only continue to strengthen the bilateral relationship between Qatar and the United States and help provide further insight into Qatar and its international and business environment." 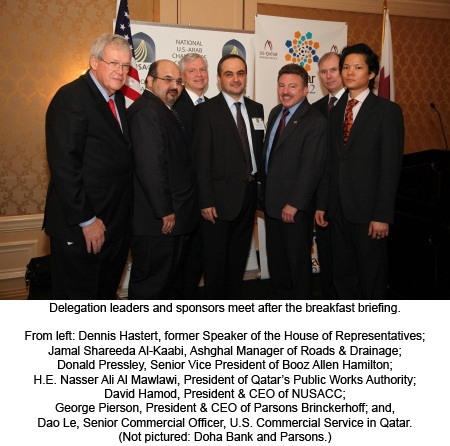 ​Qatar's Public Works Authority (Ashghal) has been helping to drive an unprecedented construction boom in recent years in order to help Qatar achieve its National Vision for 2030, an important planning document that - over the next two decades of development - will transform that Arabian Gulf nation into a world-class sports, business, and tourism hub. Ashghal’s timetable to carry out these high profile projects has been accelerated with the recent announcement that Qatar will host the 2022 World Cup, so Ashghal is visiting the United States in search of robust assistance from premier program management, engineering, consultancy, design, and equipment providers.

***
Dao Le, Senior Commercial Officer at the U.S. Embassy in Doha, gave an overview of Qatar as an increasingly attractive destination for U.S. trade and investment. He described Qatar as a "small country with a global reach," highlighting Qatar’s outsized contributions politically, economically, culturally, and as a knowledge-based society. "Qatar has no intention of serving as a gas station to the world," Mr. Le noted. "They want to be where the United States is. They want to be innovative. They want to be knowledge-driven. I predict that Qatar will be a six-billion dollar market in the next three years."
According to the U.S. Commercial Service, the United States continues to be the largest import partner to Qatar, accounting for 14 percent of the total import market. Since 2003, U.S. exports have surged by 495 percent, from $454 million to $2.7 billion in 2009. Between August 2009 and August 2010 alone, U.S. exports to Qatar grew more than 60 percent year-on-year to $2.396 billion.
Qatar is the fifth largest U.S. export destination in the Arab world, making it an important market for U.S. small and medium-sized businesses. Qatar maintains the highest per capita income in the world ($90,000), and real GDP growth in the past year reached 18.5 percent, helping to ramp up that nation’s GDP to expected levels of $128 billion for 2010.
Corporate sponsors for this event represented a microcosm of emerging opportunities in Doha in consulting (Booz Allen Hamilton), finance (Doha Bank), and construction/engineering (Parsons and Parsons Brinckerhoff). 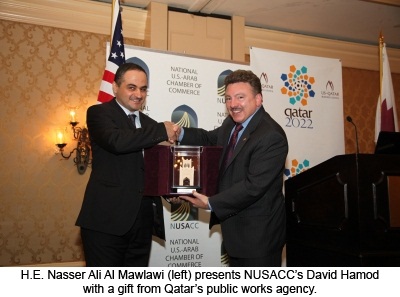 ​Building out Qatar’s infrastructure by 2022 is a tall order, and some observers are wondering if the Emirate is up to the task. "I’ve learned over the years that Qatar delights in doing the impossible," said David Hamod of NUSACC. "They have a track record of pulling off these major events in record time."
Al Mawlawi, Ashghal’s President, put it this way: "In order for us to achieve this ambitious vision and to secure this tremendous investment in infrastructure, we are working to strengthen our local, regional, and international expertise and preparing to develop strategic partnerships."
Concluded Le of the U.S. Commercial Service, "What makes Qatar unique is this: it has visionary leadership, but it also has the resources to achieve that vision. So when you combine the two, it's a powerful combination, as the Qataris show day in and day out."
HOME | Privacy Policy | My Dashboard | About | Contact | Sitemap
Copyright © 2022, National U.S.-Arab Chamber of Commerce. All Rights Reserved