Seventh Forum for the Future, Wrapping Up in Doha,
Breaks New Ground But Results in Few Breakthroughs
U.S.-Arab Chamber Calls on Delegates to Promote
Entrepreneurship, Create Knowledge-Based Economies,
and Eliminate Barriers to Trade and Investment 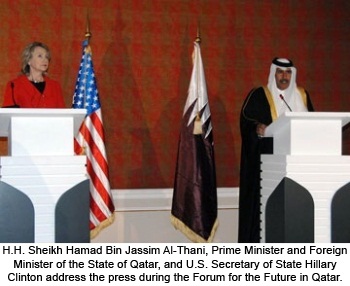 The seventh Forum for the Future, a three-day conference promoting dialogue between the G8 nations and the countries of the Broader Middle East and North Africa (BMENA), has just concluded in Doha, Qatar. The gathering produced no joint declaration and few breakthroughs, but the three parties to the discussions - governments, the business sector, and civil society organizations - agreed that the Forum was a useful exercise in identifying long-term aspirations and sharing best practices.
David Hamod, President & CEO of the National U.S.-Arab Chamber of Commerce (NUSACC), participated as a business sector delegate. "On behalf of the private sector, I want to extend our thanks for the extraordinary hospitality of the Qatari people," he said in his remarks. "The Forum may not have achieved all of its ambitious goals, but it helped to move the ball downfield, and we can build on this momentum in the months ahead."
Convened jointly by Qatar and Canada, the seventh Forum reaffirmed commitments by the G8 and BMENA governments to continue the political, economic, and social reforms underway in the region with a view to broadening the scope of participation in politics, public affairs, and decision-making.
In his opening remarks, H.H. Sheikh Hamad bin Jassem Al Thani, Qatar's Prime Minister and Foreign Minister, urged delegates to speak candidly and to work together on reforms that will promote a better quality of life. "The role of women, youth, and the rule of law are very important ... so that we share one vision that will have a positive influence for all of us," he said. "The new economies of the Middle East enable us to tackle our shortcomings and open new business horizons." 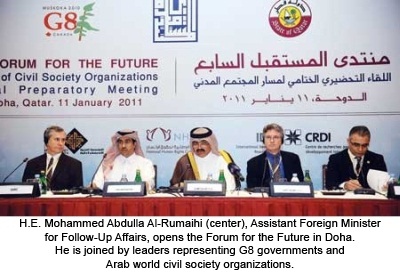 ​U.S. Secretary of State Hillary Clinton, on the last stop of an Arabian Gulf tour, described discussions that she held during what she called a "short but intense journey" in the region. "People are deeply proud of this region and what it has accomplished," she noted, "but they are also profoundly concerned about the trends in many parts of the broader Middle East, and what the future holds."
She offered a "tough love" assessment of BMENA trends: "Across the region, one in five young people is unemployed ... While some countries have made great strides in governance, in many others, people have grown tired of corrupt institutions and a stagnant political order. They are demanding reform to make their governments more effective, more responsive, and more open. And all this is taking place against a backdrop of depleting resources: water tables are dropping, oil reserves are running out, and too few countries have adopted long-term plans for addressing these problems."
"In too many places, in too many ways, the region's foundations are sinking into the sand," she continued. "The new and dynamic Middle East that I have seen needs firmer ground if it is to take root and grow everywhere ... I believe that the leaders of this region, in partnership with their people, have the capacity to build that stronger foundation. There are enough models and examples in the region to point to, to make the economic and social reforms that will create jobs, respect the right of diversity to exist, create more economic opportunity, encourage entrepreneurship, give citizens the skills they need to succeed, to make the political reforms that will create the space young people are demanding, to participate in public affairs and have a meaningful role in the decisions that shape their lives." 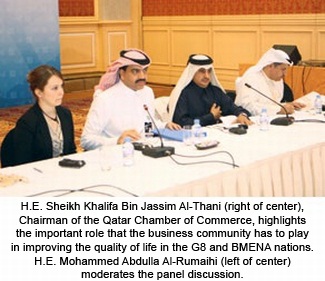 ​H.E. Sheikh Khalifa bin Jassim Al Thani, head of the business delegation and Chairman of the Qatar Chamber of Commerce and Industry, highlighted the important role that commerce has to play in improving the quality of life in the G8 and BMENA regions. He referred to the Forum as a "road map" that would help to guide delegates toward economic development -- one of the main pillars of political stability.
The private sector delegation, composed of Qatar Chamber representatives and business leaders from regional chambers of commerce, called for closer cooperation between the G8 and BMENA nations in the following four areas:
Trade and Investment Exchange - Removing obstacles to trade and investment, including but not limited to promoting trade agreements and facilitating travel and the movement of goods and services.
Unemployment and Poverty - Creating programs that support productive economic growth through access to capital and job creation, especially in labor-intensive industries.
Education and Training - Reforming education and training systems with a view to meeting the needs of labor markets in the region, with special emphasis on research and development (R&D) and investment in the field of technology.
Economic Cooperation - Promoting such cooperation between G8 and BMENA with a view to building capacity, sharing successful economic strategies, and promoting knowledge-based economies, including the establishment of joint R&D centers in the region.
The business community's recommendations were articulated by H.E. Mohamed El Masry, Senior Vice President of the Federation of Egyptian Chambers of Commerce, and H.E. Nael Raja Kabariti, Chairman of the Jordan Chamber of Commerce. 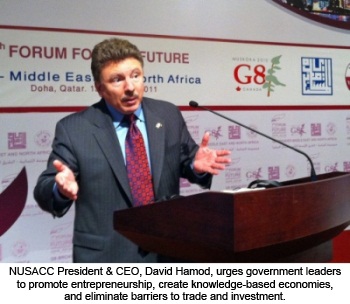 ​David Hamod, President & CEO of the National U.S.-Arab Chamber of Commerce, was one of two persons in the business delegation invited to pose a question to government leaders. He prefaced his question this way: "I come before you today as a proud American of Arab descent, and I respectfully suggest that those of us of Arab heritage who are born and raised in the G-8 nations have a special role to play in promoting mutual respect, understanding, and business cooperation between the G8 nations and the BMENA countries."
He then asked the following question: "What steps can governments take to gain a better understanding of the needs of the business community? Specifically, how do we work together to promote entrepreneurship and small & medium-sized enterprises, which play such an essential role in the growth of productive jobs in our countries? How do we work together to develop educational systems at the primary, secondary, and higher education level that will allow our students to gain practical education, knowledge, and skills for the workplace? And how do we work together to eliminate barriers to trade and investment, including visas, that are preventing our business communities from working together more closely for the mutual benefit of our respective peoples?"
***
The Forum ended without a final declaration or communiqué, but there was general agreement that new ground had been broken. In her closing remarks, U.S. Secretary of State Clinton urged delegates to "help build a future that your young people will believe in, stay for, and defend.... The Middle East is brimming with talent. It is blessed with resources, enriched by strong traditions of faith and family. This rising generation of young people has the potential to achieve so much, and we need to give them the chance to do so."
She concluded, "Let us use this time to move beyond rhetoric, to put away plans that are timid and gradual, and make a commitment to keep this region moving in the right direction."
HOME | Privacy Policy | My Dashboard | About | Contact | Sitemap
Copyright © 2022, National U.S.-Arab Chamber of Commerce. All Rights Reserved