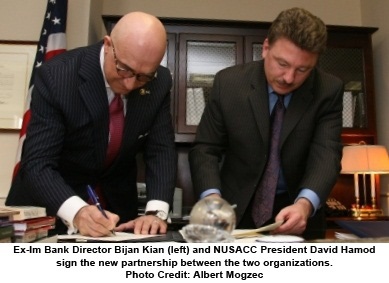 The National U.S.-Arab Chamber of Commerce (NUSACC) today signed a partnership agreement with the Export-Import Bank of the United States (Ex-Im Bank) that will raise the profile of business opportunities to American exporters. The agreement was signed on the sidelines of Ex-Im Bank's Annual Meeting by the Honorable Bijan Kian, Member of the Ex-Im Bank Board of Directors, and Mr. David Hamod, NUSACC's President & CEO.
"Ex-Im Bank plays a vital role in promoting U.S. exports, and the relationship between our two entities goes back at least 20 years," noted Mr. Hamod. "Under the circumstances, it was only natural for us to enter into a partnership -- one that will reinforce U.S. President Barack Obama's National Export Initiative (NEI) to double American exports to $3.14 trillion by 2015 in order to create an additional two million jobs."
Ex-Im Bank's City/State Partners Program is designed to increase and expand export opportunities for U.S. companies across the United States. The Program tailors specific trade finance expertise to U.S.-based exporters. By cooperating and combining each organization's strengths, NUSACC's members can be better served and Ex-Im Bank's trade facilitation mechanisms are better positioned to reach tens of thousands of U.S. companies -- especially Small and Medium-Sized Enterprises (SMEs).
City/State Partners promote, create, and expand business in a given region by making available financing assistance and entrepreneurial services, and assisting local businesses in creating new jobs through exports. Ex-Im Bank offers a wide range of services to its partners, including export finance training, the most current trade finance information and specialists, and a network of lenders, insurance brokers, and other U.S. government export resources. 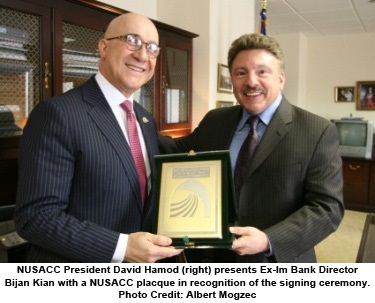 ​According to recent research conducted by the National U.S.-Arab Chamber of Commerce, the size of the region's important market is on track to grow to $1 trillion by 2013. The U.S. share of that growing import market is on track to reach nearly $117 billion in goods and services -- an unprecedented level of U.S. exports. America's share of total market demand in the MENA region is expected to rise from 8.9 percent in 2009 to 11.2 percent by 2013.
Concluded Director Kian, "NUSACC has played an important role in connecting businesses in the Middle East and the United States. The relationship between NUSACC and the Export Import Bank of the United States has been benefiting NUSACC member companies and U.S exporters over the past two decades. As we execute this MOU today, I am pleased to see our relationship further defined, expanded, and focused. NUSACC will continue to be an important partner in serving our mission of implementing the President's National Export Initiative through our Global Access program."
HOME | Privacy Policy | My Dashboard | About | Contact | Sitemap
Copyright © 2022, National U.S.-Arab Chamber of Commerce. All Rights Reserved