U.S.-ARAB CHAMBER REPORT SAYS U.S. EXPORTS TO
MENA REGION WILL RISE TO $117 BILLION BY 2013
Guest Speaker Francisco Sanchez, Under Secretary of
Commerce, Tells Business Executives: "Change is Afoot
Throughout the Region, and Nothing Can Safeguard the
Region More Than Economic Progress"
Market Demand in the Arab World Will Exceed One Trillion Dollars
by 2013, Sustaining More Than One Million U.S. Jobs 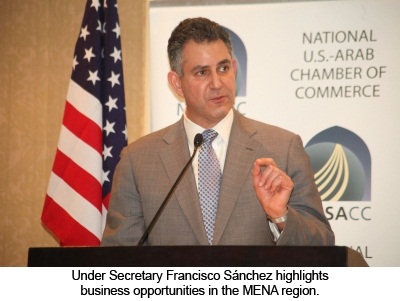 Washington, DC - At a luncheon today organized by the National U.S.-Arab Chamber of Commerce (NUSACC), U.S. Under Secretary of Commerce Francisco Sanchez told 200 leading U.S. business executives that "change is afoot throughout the region, and nothing can safeguard the region more than economic progress."
Secretary Sanchez, who plays an instrumental role in the U.S. Government's efforts to promote American exports, made his remarks at the same event at which the U.S.-Arab Chamber released a first-of-its-kind report on U.S. sales of goods and services to the Middle East and North Africa (MENA) region through the year 2013.
"For the first time, more than one million direct and indirect American jobs will be created or sustained by U.S. exports to the Arab world," noted David Hamod, NUSACC’s President & CEO. "The MENA region is well positioned to play a key role in America’s efforts to generate employment here at home through exports."
Today’s luncheon was attended by five Arab ambassadors, four of whom represent nations that have signed Free Trade Agreements (FTAs) with the United States: Bahrain (H.E. Houda Nonoo); Jordan (H.E. Alia Hatoug-Bouran); Morocco (H.E. Aziz Mekouar); and, Oman (H.E. Hunaina Al-Mughairy).
Also in attendance were H.E. Ali Al-Aujali, Libya’s Ambassador to the United States, and H.E. Mohammed Abdulla Al-Rumaihi, Qatar’s Assistant Foreign Minister for Follow-Up Affairs. Sponsors for today’s luncheon included major U.S. exporters and investors: Boeing Company, Chevron, Citi, Fluor Corporation, and Lockheed Martin Corporation.
The groundbreaking NUSACC study finds that:
* Total market demand in the Arab world is expected to exceed one trillion dollars by 2013. The U.S. share of that growing import market is on track to reach nearly $117 billion in goods and services - an unprecedented level of U.S. exports. America’s share of total market demand in the MENA region is expected to rise from 8.9 percent in 2009 to 11.2 percent by 2013.
* U.S. exports to the MENA region are on track to grow steadily from $67.70 billion in 2010 to $83.21 billion in 2011 to $95.17 billion in 2012 to $116.60 billion in 2013. The six Gulf Cooperation Council (GCC) nations in the Arabian Gulf, whose markets were responsible for more than 70 percent of U.S. exports to the Arab world in 2010, will continue to be major markets for U.S. goods and services for many years to come.
* The top three Arab markets are expected to maintain the same ranking - led by the United Arab Emirates ($35.59 billion), Saudi Arabia ($26.48 billion), and Egypt ($10.29 billion) - but subsequent rankings are likely to change. Iraq ($8.53 billion) is expected to move up to the number four position, followed by Kuwait ($6.06 billion), Lebanon ($5.66 billion), and Qatar ($5.59 billion). The next four slots will be occupied by nations that have signed Free Trade Agreements (FTAs) with the United States: Oman ($3.01 billion), Morocco ($2.99 billion), Bahrain ($2.97 billion), and Jordan ($2.71 billion).
* The United States is doing well but cannot afford to rest on its laurels. In a recent comparison between U.S. exports to MENA vs. exports from BRIC nations (Brazil, Russia, India, and China), at least one of the BRIC nations is increasing its market share at the possible expense of the United States. During the period 2007-2009, U.S. market share (vs. BRIC nations) dropped from 33.69 percent to 28.54 percent. Most of the BRIC nations held steady during this period, but India grew from 19.68 percent in 2007 to 24.33 percent in 2009. For its part, China has recently replaced the United States as the top exporter to the MENA region.
"For U.S. companies to hold their own against newfound competition from these growing Asian powers," noted NUSACC’s Hamod, "we need to capitalize on America’s commitment to high quality, open our nation’s doors wider to trade and investment opportunities, overhaul America’s cumbersome and sometimes humiliating visa processes, and engage the U.S. Government at the highest levels to serve unabashedly as an advocate for U.S. business in overseas markets. Under Secretary Sanchez has been one of the most dedicated advocates for American companies and U.S. exports that we’ve seen in years." 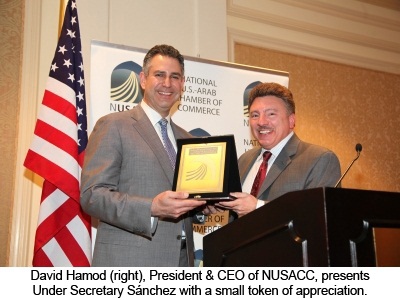 ​In the past year, Under Secretary Sanchez has traveled often to the MENA region, accompanying missions to Algeria, Libya, Saudi Arabia, Qatar, and Iraq. He led two trade missions to Saudi Arabia last year, one focused on healthcare and the other focused on energy and infrastructure. "I am not alone," he quipped, running through a list of upcoming trade missions that will be led in the months ahead by senior U.S. Commerce Department officials to the UAE, Saudi Arabia, Qatar, Morocco and Tunisia. In June, he noted, U.S. Secretary of Commerce Gary Locke will lead a transportation and infrastructure mission to the UAE and Qatar, which recently won the right to host the 2022 World Cup - paving the way for an estimated $100 billion in infrastructure development in the years to come.
U.S. President Barack Obama’s National Export Initiative (NEI), launched in March 2010, calls for doubling American exports to $3.14 trillion by 2015 in order to create an additional two million jobs. "The National Export Initiative has put trade promotion at the top of the U.S. Government’s agenda," noted Sanchez, and the International Trade Administration (ITA) "is leading many of the NEI’s components."
Sanchez told the crowd of business leaders that the ITA is focused on promoting trade, counseling American companies on overseas opportunities, opening markets through trade missions and other promotional events, helping to eliminate trade barriers, and ensuring that foreign business environments are transparent and equitable. "As the global economy and international trade recover," he said, the U.S. Government "will have aligned its resources to better serve the American exporting community and to achieve the NEI’s goals." 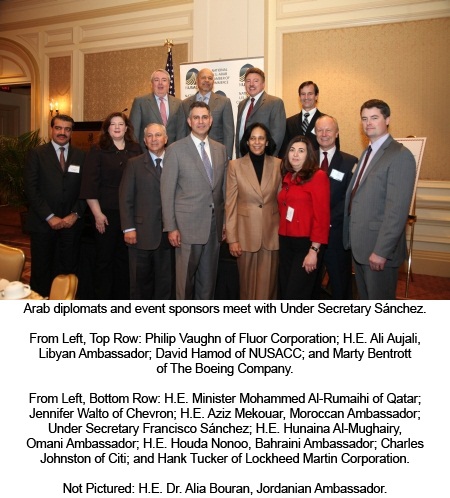 ​According to the new NUSACC report, four regional demand factors are the core drivers for U.S. exports: infrastructure build-out, upstream energy development and downstream petrochemical projects, consumer spending, and enhanced investments in defense.
Of these four drivers, infrastructure build-out is the most important across the MENA region, prompting substantial regional reinvestment in local MENA economies. The Arab market accounted for four percent of the world’s total foreign direct investment (FDI) inflows in 2007, and these rose to seven percent in 2009, according to the United Nations Conference on Trade and Development (UNCTAD). Given the high return opportunities, according to the NUSACC study, three to four investment dollars from abroad are likely to enter the MENA countries for every FDI dollar that these countries invest outside their home markets.
FDI inflows to Saudi Arabia, number one in the region, are driven by energy and infrastructure investments that average $32 billion per year. Inward FDI stocks in the Arab market increased more than ten-fold from $50.8 billion in 1990 to $541.9 in 2009, according to the latest UNCTAD World Investment Report (2010). Saudi Arabia captured 27 percent of the Arab world’s total inward investments, followed by the UAE (14 percent), Egypt (12 percent) and Morocco (6 percent).
The National U.S.-Arab Chamber of Commerce produces an annual export forecast every year, but this is the first time that NUSACC - or anyone else - has produced a three-year forecast for U.S. goods and services destined for the MENA nations. The report is chock full of new data covering each of the 22 Arab nations. Each country profile contains three charts: Top U.S. exports through the year 2013; key metrics (real GDP growth, imports for goods and services, market share, and the like); and "Sectors to Watch." The latter table focuses on fast moving niche categories that should be of special interest to U.S. small and medium-sized enterprises (SMEs).
"Today’s luncheon was a celebration of U.S. goods and services and American exporters," concluded NUSACC’s David Hamod. "Business-driven chambers of commerce like ours, working hand-in-hand with our U.S. Government colleagues, will continue to open MENA markets, create U.S. jobs, and generate export opportunities for American companies - to 2013 and beyond."
HOME | Privacy Policy | My Dashboard | About | Contact | Sitemap
​Due to COVID-19,  and in the interest of public safety, walk-in service at NUSACC is temporarily suspended. Because our clients deserve the best possible service, certification services will continue to be offered by MAIL.