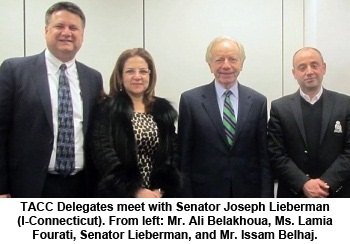 The National U.S.-Arab Chamber of Commerce has just wrapped up visits by the first two delegations to come to the United States from Tunisia since that nation’s revolution took place on January 14, 2011. The first delegation, composed of non-governmental organizations (NGOs), met with NGO leaders and U.S. Government officials interested in strengthening civil society in Tunisia. The second delegation, made up of business representatives affiliated with the Tunisian American Chamber of Commerce (TACC), met with private and public sector leaders focusing on the business environment and Tunisia’s rule of law.
“Our chamber is honored to host these extraordinary individuals -- each of whom, in his or her own way, is helping to shape the new Tunisia,” noted David Hamod, President & CEO of the National U.S.-Arab Chamber of Commerce (NUSACC). “They carried messages of hope and optimism that had an important impact on Washington’s policymakers.” 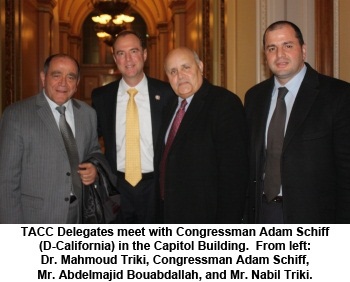 ​The TACC delegation met with Members of Congress who expressed strong support for Tunisia’s democracy movement, including Senator Joseph Lieberman (I-Connecticut), Rep. John Dingell (D-Michigan), Rep. Betty McCollum (D-Minnesota), Rep. Charles Boustany (R-Louisiana), and Rep. Adam Schiff (D-California). Congressman Schiff who was deeply inspired by the delegates story of Tunisia’s revolution said, “I am committed to ensuring that we vigorously support Tunisia's people-powered revolution, and help that nation in its moment of transition to democracy."
Senator Lieberman noted, “We in the United States need to do everything we can to support the Tunisian people as they embark on the transition to democracy. Precisely because the democratic wave began in Tunisia, it is critically important that we make sure that it succeeds there. We cannot afford to forget Tunisia.”
In part in response to visits by these delegations, members of the U.S. Senate have introduced S.618, a bipartisan bill designed to support entrepreneurs and job creation in Tunisia. The bill, co-sponsored by Senators John Kerry (D-Massachusetts), Joe Lieberman, and John McCain (R-Arizona), would create a Tunisian-American Enterprise Fund to provide between $10 to $20 million of capital to new businesses in Tunisia.
The visits come at a critical time for Tunisia in its quest for democratic reform. As a result of that North African nation’s political instability – from within its own borders and from its neighbor, Libya – Tunisia will for the near term be fighting a “triple whammy” of falling investment, plummeting tourism revenues, and surging numbers of refugees.
“We Tunisians are turning to the United States in our time of need,” said TACC President Nazeh Ben Ammar. “Tunisia was among the first nations to recognize the fledgling United States, and in 1799, our two countries signed our first agreement of friendship and trade. It is only natural, then, that we should look to the United States during this difficult time for guidance and support.”
Curtis Silvers, NUSACC’s Executive Vice President, commended the delegates for “highlighting the interconnectedness of economic reform and prosperity, democracy and political stability, and the creation of productive jobs – which is where the Tunisian revolution started in the first place.” But, he admonished, the Tunisian people “will only remain patient for so long. They need to see results, or the nation could be plunged back into chaos.”
With this in mind, Tunisian delegates asked U.S. policymakers to:
* Lead the way internationally in providing debt relief to Tunisia. (Tunisia’s debt to the United States represents two to three percent of that nation’s total foreign debt.)
* Restore the assets of Zine El Abidine Ben Ali, Tunisia’s deposed President, to the Tunisian people. (Estimates of his wealth, and that of his family, range as high as $5 billion.)
* Provide incentives for U.S. companies to do business with and invest in Tunisia.
* Reduce tariffs on select Tunisian exports that are competitive and will help to generate good jobs in Tunisia. These include information and communications technologies (ICT), textiles, foodstuffs, and light industries like automotive parts.

In addition to holding meetings on Capitol Hill, the Tunisian delegates met with a range of Obama Administration officials. Holly Vineyard, Deputy Assistant Secretary of Commerce for Africa, the Middle East, and South Asia highlighted the importance of an upcoming U.S. Government trade mission that will include Tunisia. She said, “Assistant Secretary of Commerce Suresh Kumar’s participation on the upcoming State Department trade mission to Tunisia demonstrates our broad commitment to the commercial relationship between our two countries at this pivotal time. The Tunisian American Chamber of Commerce visit enabled us to explore ways in which the U.S. Department of Commerce can continue to work with Tunisia.” And echoing the theme of many offices she concluded, “Tunisia remains an important market and friend of the United States.”
According to a new study published by the National U.S.-Arab Chamber of Commerce, sales of U.S. goods and services to Tunisia are on track to grow to $970 million by the year 2013.
The Tunisian American Chamber of Commerce delegation was comprised of 16 business delegates from such sectors as ICT, textiles, manufacturing, education, banking & finance, accounting, and law. Three of the delegates represent U.S. companies in Tunisia: Ernst & Young, Cisco Systems, and Microsoft.
H.E. Mohamed Salah Tekaya, Ambassador of Tunisia, who hosted the TACC delegation at his residence said, “The mission illustrates the strong commitment of the Tunisian private sector to move quickly to explain to Tunisia’s partners the hopes that the Revolution has created for the people of Tunisia,” as well as the “opportunities that a democratic Tunisia can offer American companies.” He believes “the mission has opened new perspectives for partnership between the private sector in Tunisia and in the U.S., which will contribute to the strengthening of the economic relations between the two countries.” 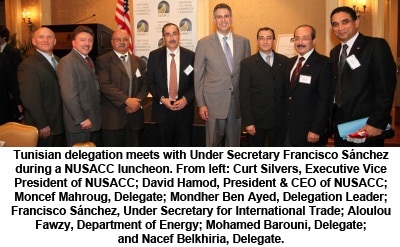 ​At an event co-hosted by NUSACC and the Woodrow Wilson Center for International Scholars, TACC delegates discussed the democratic developments and challenges after the Jasmine Revolution.  Moderator Haleh Esfandiari, Director of the Middle East Program, said, “Tunisia and Morocco are among the most progressive countries in the region when it comes to women’s rights.” Delegates agreed this is one of the many strengths Tunisia has in place to move the country forward.
Mondher Ben Ayed, who played a key role in organizing the World Summit for the Information Society (WSIS), held in Tunisia in 2005, led the civil society delegation in February to Washington DC – the first of its kind. He concluded, “Despite current difficulties, Tunisians have a strong faith that their future is bright. Tunisia will soon be the first modern, free, and democratic country in the Arab region.”
HOME | Privacy Policy | My Dashboard | About | Contact | Sitemap
Copyright © 2022, National U.S.-Arab Chamber of Commerce. All Rights Reserved