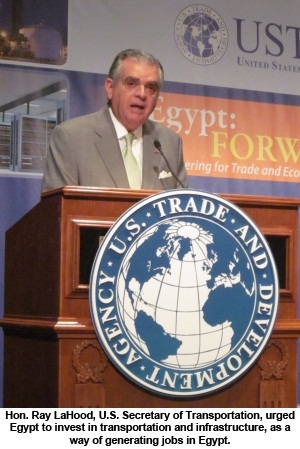 The National U.S.-Arab Chamber of Commerce (NUSACC) today wrapped up its participation in "Egypt: Forward," a five-day initiative to promote trade and investment between the United States and the Arab Republic of Egypt. NUSACC, one of three corporate sponsors of a high-level Forum held in Washington DC, also served as Silver Sponsor of a two-day Business Briefing and Site Visit to Omaha, Nebraska that was dedicated to agribusiness opportunities. "Egypt: Forward" was sponsored by the U.S. Trade and Development Agency (USTDA) in coordination with the U.S. Departments of State and Commerce, the Embassy of the Republic of Egypt, and various private sector entities.

"Our Chamber is proud to help sponsor this important event, and we commend USTDA for leading this timely initiative to 'jump start' commercial relations between the USA and Egypt, a vital partner for economic growth," noted David Hamod, President & CEO of the U.S.-Arab Chamber. "Egypt's revolution is at a crucial stage, and U.S. companies are well positioned to partner with Egypt's private sector to share expertise, promote joint ventures, and help to create productive jobs."

The Forum in Washington DC drew more than 450 participants, sending a message to Egypt that the United States stands ready to play a key role in helping Egypt to get back on its feet economically. The Honorable Leocadia Zak, Director of USTDA, said the Forum "achieved everything we hoped. Friendships were made and partnerships were sealed. NUSACC was instrumental in making 'Egypt: Forward' the success that it is."
​
The Egyptian delegation to the United States was led by H.E. Dr. Magued Osman, Egypt's Minister for Communications and Information Technology, reflecting the importance that Egypt places on business services and the high tech sector. In his keynote address, Minister Osman touted Egypt's efforts to reduce the digital divide through a new "eMasr 2020" program in support of the ten-year national broadband plan that will launch later this year. The ICT sector experienced 13 to 14 percent growth in recent years, he said, now contributing approximately four percent to Egypt's GDP. The research firm of A.T. Kearney ranks Egypt fourth in the world in business outsourcing, he noted, and the European Outsourcing Association recently named Egypt its "outsourcing destination of the year." 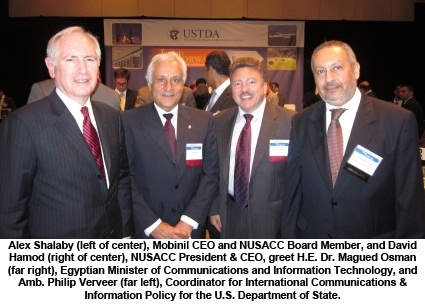 ​Seventy percent of Egypt's online community is between 18 and 34 years of age, Minister Osman said, and the number of Facebook users has surged to more than 7 million in recent months. As a result of mobile and Internet penetration, he quipped, Egypt now has "87 million experts in democracy."
While Minister Osman was highlighting "clicks and mortar," the ranking U.S. Government official, Secretary of Transportation Ray LaHood, was promoting more traditional bricks and mortar. "When you invest in transportation and infrastructure," Secretary LaHood said, "you invest in your own people." He pointed out that the United States has invested $48 billion worth of stimulus funding in infrastructure recently, generating 65,000 jobs.


"Your country is doing the right thing," Secretary LaHood noted, "and we applaud you." American companies are "more than willing to partner with you," he suggested, and the United States invites Egypt to "take a leaf out of our book of progress" on the road to recovery.
This upbeat approach was echoed by Assistant Secretary of State Jose Fernandez, saying, the Arab Spring helped Egypt to "take flight, and now it's time to take root." Secretary Fernandez highlighted some of the new U.S. Government programs designed to boost Egypt's economic growth. 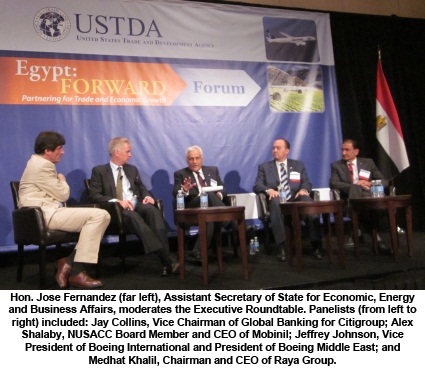 ​These include: a $700 million fund at the Overseas Private Investment Corporation (OPIC) to help small and medium-sized entities (SMEs) to create more than 50,000 new jobs; microfinance made available through the U.S. Agency for International Development; the Global Entrepreneurship Program, administered through the State Department, to put successful U.S. start-ups and angel investors in touch with their counterparts in Egypt; Partners for a New Beginning, also under the auspices of the State Department, which encourages public-private partnerships; and the DF4D initiative, which works to encourage transparency and mitigate corruption.

The U.S. Congress, with encouragement from the White House, is working on legislation that would create new Enterprise Funds for Egypt and Tunisia that are modeled after comparable initiatives launched in Central and Eastern Europe after the fall of the Iron Curtain. The U.S. Senate Foreign Relations Committee approved a bill in mid-May that would authorize such Enterprise Funds for the Arab world.

There was at least one "deliverable" to come out of the two-day Forum: an Egyptian company, Carbon Holdings, signed agreements with six U.S. firms to construct a new petrochemical facility in Ain Sokhna, Egypt. Leading the effort for Carbon Holdings will be Mr. Basil El-Baz, Chairman and CEO of Egypt Basic Industries Corporation, in cooperation with Shaw Group, Univation Technologies, Vinmar International, Transammonia, Foster Wheeler USA, Transcor Astra, and SK Engineering and Construction. At the peak of construction, according to Carbon Holdings, almost 20,000 workers will be employed in building the facility.
​
More than 50 Egyptian government officials and business leaders traveled to the United States for the "Egypt: Forward" initiative. In addition to participating in the Forum in Washington, they fanned out across the United States to take part in sectoral workshops in four locations: Silicon Valley (ICT), New York City (transportation), Houston (energy), and Omaha, Nebraska (agribusiness). 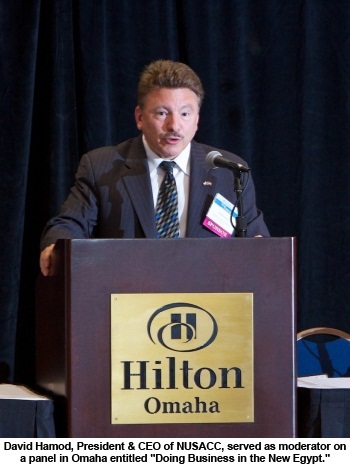 ​At the Omaha Business Briefing, NUSACC's President & CEO, David Hamod, led a panel discussion dedicated to "Doing Business in the New Egypt." In his opening remarks, Hamod noted that agriculture in ancient Egypt created a legacy that helped to revolutionize agricultural practices around the world. He went on to say, "By connecting the American Middle West with the Arab Middle East here in Omaha, U.S. companies now have an opportunity to share the latest agricultural technologies with Egypt and to form partnerships with leading Egyptian companies."

One of the highlights of the Washington-based Forum was an Executive Roundtable led by private sector leaders from Egypt and the United States. Jeff Johnson, President of Boeing Middle East and a Board member of the National U.S.-Arab Chamber of Commerce, highlighted the need for "tangible progress" to satisfy Egypt's youth, including the more than 750,000 college students who are graduating every year. Johnson announced a plan to establish a training program for grads, as well as bringing standout professionals to the Boeing Leadership Center in the United States.

Alex Shalaby, another NUSACC Board member and CEO of Mobinil, Egypt's preeminent mobile phone operator, made a case for the transformative role that technology is playing in the new Egypt. He also cited a recent International Republican Institute poll which found that 89 percent of Egyptians feel that their country is moving in the right direction, while 49 percent of those interviewed feel that Egypt's economic situation is "very bad." Shalaby suggested that now is the time for Egypt to rely on its friends, with the United States, Egypt's #1 investor, foremost among these friends.
​
Shalaby summed up the view of many attending the "Egypt: Forward" event with a February 11 quote from Barack Obama, President of the United States: "There are very few moments in our lives where we have the privilege to witness history taking place. This is one of those moments. This is one of those times. The people of Egypt have spoken. Their voices have been heard, and Egypt will never be the same."
HOME | Privacy Policy | My Dashboard | About | Contact | Sitemap
Copyright © 2022, National U.S.-Arab Chamber of Commerce. All Rights Reserved