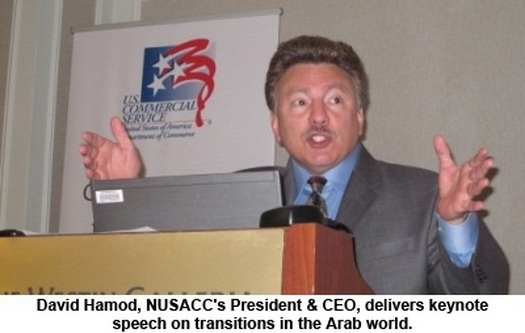 Access 2011, an annual conference organized by the U.S. Department of Commerce, wrapped up today in Houston, Texas. The two-day event showcased business opportunities in Africa, the Near East, and South Asia (ANESA) for the more than 300 participants attending the gathering. Over 450 one-on-one meetings were held between U.S. exporters and the 18 Senior Commercial Officers who traveled from ANESA nations to Houston for the conference.
David Hamod, President & CEO of the National U.S.-Arab Chamber of Commerce (NUSACC), delivered a keynote address on business opportunities in the Arab world in a time of transition. "For most of the region," he said, "high oil prices are ensuring that projects and mega-projects continue to move forward on schedule. There are greater risks today than there were a year ago, but there are also greater rewards. Certain sectors and certain countries have been deeply affected by the political unrest, but for those nations that are largely unaffected, the region's economic drivers may be stronger than ever."
Hamod described four drivers in particular: infrastructure build-out, including water & power, schools, hospitals, roads, railways, ports, airports, and a wide range of multimodal opportunities; upstream energy development and downstream petrochemical projects; defense acquisitions, which may be on an upswing in the face of continuing unrest in the region; consumer confidence, including the material needs of youth, who make up approximately two-thirds of the region's population. These four drivers are consistent with the U.S.-Arab Chamber's recent study on U.S. exports through the year 2013.
"None of us has a crystal ball that will tell us what the region will look like in coming years," Hamod said, but he suggested a series of "best case" and "worst case" scenarios. In one instance, he noted, economies will be driven by the private sector, which will promote real economic growth through entrepreneurship, innovation, privatization, education and training. A less appealing scenario, he suggested, might see economies orchestrated by governments that are driven by short-term political needs. Such an environment, he said, would lend itself to nationalization, subsidies, the creation of "make work" sinecures, and the replacement of old cronies with new cronies. 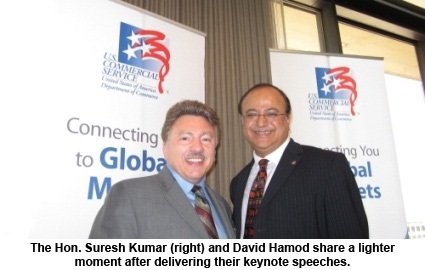 "From our chamber's perspective," Hamod concluded, "the fundamental cause of recent unrest in the region is economic disparities. With that in mind, regional governments should be focused on three priorities: jobs, jobs, and more jobs."
The importance of job creation theme was echoed by another keynote speaker, the Hon. Suresh Kumar, Assistant Secretary of Commerce and Director General of the U.S. Commercial Service. Highlighting the important role that U.S. exports play in bolstering America's economy, he urged participants to begin or expand their exports, stating, "Exports comprised 12.5 % of U.S. GDP in 2010, up from the 11.2% recorded in 2009. Exports contributed nearly half of the 2.9 percentage point growth in real GDP in 2010. The $1.83 trillion total in exports of U.S. goods and services represents the second-highest annual total on record."
He continued, "The more we sell overseas, the more jobs we create in the United States. Every $1 billion of goods and services we export supports more than 5,000 U.S. jobs."
Assistant Secretary Kumar praised the "cutting-edge" innovations that have made the United States what it is today, but he admonished that "winning the future will require continued private sector innovation." He assured the U.S. private sector that "the Administration is committed to lay the foundation for future success through policy mechanisms that reduce risk, provide greater predictability, and influence common standards." 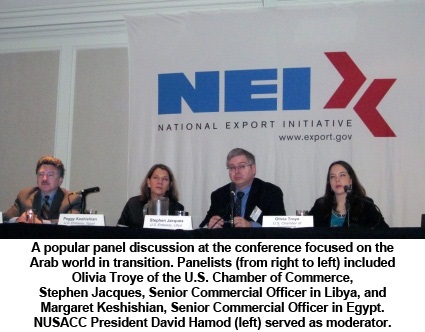 In his concluding remarks, Kumar issued a clarion call to U.S. businesses, asserting that "to win the future, U.S. businesses must expand their global reach to new markets. Less than one percent of America's 30 million companies export, and of those companies that do export, 58 percent export to only one country. Clearly we can, and must, do more to ensure that U.S. businesses capture the full potential of economic opportunities that exist internationally."
Following his keynote address, NUSACC's David Hamod served as moderator for a panel of experts discussing "Middle East and North Africa in Transition." Points stressed by the panelists included keeping in close touch with U.S. Embassy officials when considering commercial ventures in these times of change, as well as the importance of visiting the region in order to make first hand assessments of prospective local partners. "Dealing in MENA countries may not be for everyone," one panelist observed, "but risk, opportunity, and returns go together."
The Senior Commercial Officer conference, now in its second year, focused on such emerging sectors as energy, health care, infrastructure, safety and security, and "green" technologies. Houston, as the fourth largest city in the United States, served as an excellent venue for the conference. Texas is America's largest exporting state, with growing economic diversity away from oil & gas, its traditional strengths.
HOME | Privacy Policy | My Dashboard | About | Contact | Sitemap
Copyright © 2022, National U.S.-Arab Chamber of Commerce. All Rights Reserved