U.S.-ARAB CHAMBER HOSTS FIRST EVER
AMBASSADORS FORUM IN SALT LAKE CITY
Diplomats from Morocco, Oman, and Tunisia Highlight Business
Opportunities in the Arab World in a Time of Transition 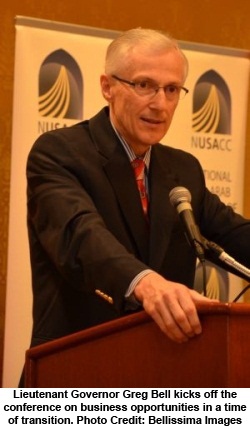 The Forum was sponsored by Lockheed Martin and S.K. Hart Management, and it was supported by the Rollins Center for Entrepreneurship and Technology at Brigham Young University (BYU), the Salt Lake City Chamber of Commerce, the Utah Technology Council, and World Trade Center Utah. The event took place on the sidelines of the National Governors Association annual meeting in Salt Lake City, to which NUSACC led a high-level delegation of Arab ambassadors.
The Honorable Greg Bell, Utah's Lieutenant Governor, opened the half-day conference with words of welcome for the delegates. "In Utah's finest tradition of working around the world to build lasting partnerships, I am honored to welcome to Salt Lake City the Ambassadors of Morocco, Oman, and Tunisia, supported by the National U.S.-Arab Chamber of Commerce," he said.
​
The Lieutenant Governor offered warm and insightful remarks about the importance of business as a mechanism to bring people together, overcome barriers, and build a better world. He concluded, "This opportunity for Utah businesses to hear from and interact with ambassadors from the Arab world is unique and critical to our mutual goals of creating jobs, growing economies, and expanding the basis for friendship and cooperation. I look forward to working together to build upon the foundation of partnership laid here today." 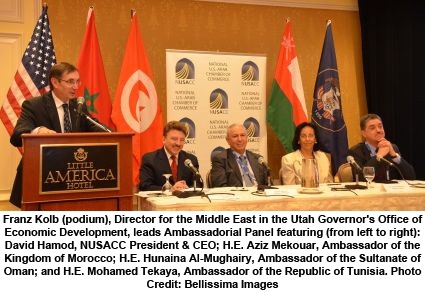 ​David Hamod, President and CEO of the National U.S.-Arab Chamber of Commerce, delivered a keynote address on business opportunities in the Arab world in a time of transition. He noted that the Arab world consists of 22 countries with more than three hundred million people, roughly the size of the United States. "The Middle East and North Africa (MENA) region is undergoing remarkable change," he said, "remaking the landscape for U.S. business interests in the Arab world. Despite these widespread changes, the MENA region continues to be one of the most attractive places in the world for U.S. exporters."
Hamod noted that U.S. goods and services to the Arab world are slated to increase to $117 billion by the year 2013, creating or sustaining more than one million direct and indirect U.S. jobs. Total market demand in the Arab world is expected to exceed one trillion dollars by 2013, and U.S. market share is on track to exceed 11 percent, up from roughly 9 percent in 2009. "The MENA region is positioned to play a key role in America's efforts to generate employment here at home through exports," Hamod concluded. "If trends continue as expected, U.S. exports to the Arab world will break all records in the next two years."
​
Each of the Arab ambassadors made a presentation on business opportunities in his or her nation.
H.E. Aziz Mekouar, Ambassador to the U.S. from the Kingdom of Morocco, identified gatherings like the Ambassadors Forum as critical not only for finding potential business partners, but also to help dispel misperceptions across borders. "People-to-people connections are the best way to get to know another people," said Ambassador Mekouar. "Business is one good way to make such connections."

​Ambassador Mekouar went on to describe the business opportunities available in Morocco. With steady annual growth of 5 percent over the last five to six years, and with free trade agreements with the United States, Europe, Turkey, Africa, and a number of Arab nations, Morocco provides duty-free access to 1.2 billion people. Ambassador Mekouar outlined eight national investment priorities in Morocco, including: The Emergence Plan, which seeks to add $10 billion dollars of additional growth to Morocco's GDP and to create 440,000 jobs; The Rawaj Plan, which seeks to triple retail outlets by 2020; Green Morocco, which seeks $17.7 billion in agricultural investment by 2020; and Energy 2020 - 2030, which looks to expand Morocco's renewable energy supply to 15 – 20 percent of total energy requirements.
H.E. Hunaina Al-Mughairy, Ambassador to the United States from the Sultanate of Oman, stressed that Oman is "ideal for long term investment." She outlined the benefits of Oman's Free Trade Agreement with the United States, Oman's stable and business-friendly government infrastructure, and the nation's highly educated work force.
"Connecting to potential business partners in Utah through this forum is a tremendous opportunity," Ambassador Al-Mughairy suggested. 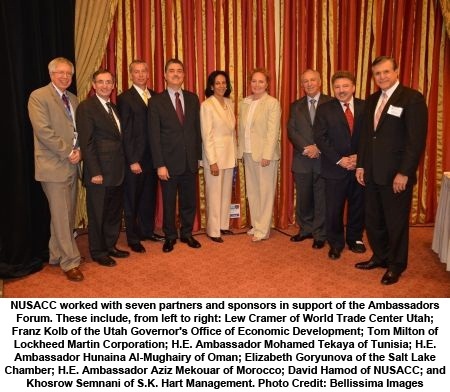 ​H.E. Mohamed Tekaya, Tunisia's Ambassador to the United States, said that Tunisia "is at a crossroads." He described the political transformation underway in Tunisia, including Constituent Assembly elections scheduled for October 23, 2011. "Tunisia thanks the United States for its support during our revolution and America's continued support for a successful future. We should build that future together," Ambassador Tekaya stated.
Ambassador Tekaya outlined Tunisia's Five Year Plan, which seeks to invest $125 billion, $100 billion of which will come from Tunisia itself and the rest from foreign investment. The Five Year Plan is focused on: strengthening governance; upgrading infrastructure; expanding international integration; developing human capital; and reforming the financial sector.
David Fiscus, Director of the U.S. Commercial Service in the State of Utah, provided closing remarks. He said, "Not only is now the time for Utah companies to compete globally, but today's proceedings showed that now is the time for them to look at market opportunities in the Arab world." From 2006 - 2010, Fiscus said, Utah's exports to the world doubled. During the same five year period, he noted, Utah's exports to the Middle East and North Africa increased by 130 percent. He concluded, "Such rapid growth, coupled with the numerous Free Trade Agreements (FTAs) that the United States has in the region, further highlights the attractiveness of opportunities for Utah businesses in these markets."
HOME | Privacy Policy | My Dashboard | About | Contact | Sitemap
Copyright © 2022, National U.S.-Arab Chamber of Commerce. All Rights Reserved