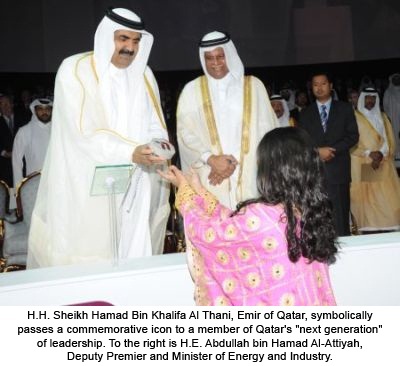 Doha, Qatar – The State of Qatar today recorded another "first" for the Arab world: reaching a production capacity of 77 million tons per annum (Mta) of liquefied natural gas (LNG). This is an important milestone for the emirate which, in less than 15 years, has become the world's largest producer of LNG.
David Hamod, President & CEO of the National U.S.-Arab Chamber of Commerce (NUSACC), who participated in the celebration in Doha, said, "This is a remarkable success story. Qatar serves as an excellent example of how a nation’s natural resources can be harnessed to invest in a higher quality of life for current and future generations. Our chamber congratulates H.H. the Emir, Sheikh Hamad Bin Khalifa Al Thani, on this singular achievement."
More than 1,000 dignitaries from all over the world attended the celebration, which took place at Ras Laffan Industrial City, the hub for Qatar's energy activities. The festive occasion included a "history walk" that looked back on Qatar’s energy development over the years, Cirque du Soleil-like performances, testimonials from global leaders, a troupe of school children representing the many nationalities resident in Qatar, and even the issuance of new stamps and first day covers to mark the occasion.
In a multimedia presentation aired during the celebration, H.H. the Emir looked back on Qatar’s development. He pointed out how Qatar has invested in infrastructure rather than weapons and how the nation’s natural resources have enabled Qatar to invest in a knowledge-based economy. With a view to boosting the next generation of business leaders, H.H. the Emir highlighted a QR 2 billion (almost $550 million) fund that he established recently to promote entrepreneurship and diversify away from dependence on oil and gas.
The man most directly responsible for overseeing the nation’s energy policies during the past 15 years, H.E. Abdullah Bin Hamad Al Attiyah, Qatar’s Deputy Premier and Minister of Energy and Industry, greeted many of Qatar’s friends and customers from around the world. He congratulated H.H. the Emir and the people of Qatar "on this momentous occasion, which demonstrates Qatar’s growing role in delivering LNG to the world," and he traced Qatar’s growth from a small producer of 35,000 barrels of oil per day to the world’s largest producer of LNG. "I am very proud of what we have achieved together to realize the vision of His Highness the Emir," Al Attiyah stated. "Fulfillment of this vision marks the beginning of the next chapter of our journey together." 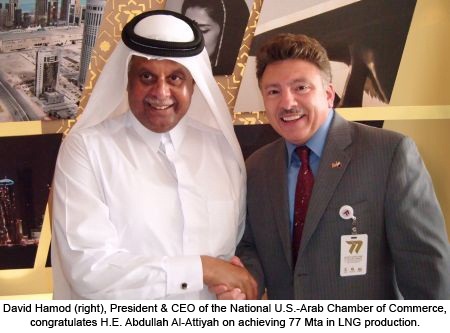 ​Qatar today supplies gas to customers in 23 nations on four continents. Qatar makes up 28 percent of the world’s LNG production, representing sufficient annual capacity to meet the world’s gas needs for 13 days. Seventy-seven million tons per annum of LNG is enough to fulfill the natural gas demands of the United States for 59 days. Or, put another way, 77 Mta would supply the gas needs of Greater London for 16 years.
LNG production and sales lie at the heart of Qatar National Vision 2030, which is focused on creating a knowledge-based economy built on four pillars: social, economic, human, and environmental development. Qatar has successfully melded economic development with environmental protection, and the Qatargas Coral Relocation Program - protecting 4,500 coral colonies - is a source of particular pride.
U.S. Ambassador Joseph E. LeBaron was one of the diplomats who joined the 77 Mta celebration. "Qatar has rapidly transformed itself into one of the world’s premier energy suppliers through its visionary leadership and strategic partnering with the finest U.S. corporations," he said. "We look forward to working shoulder-to-shoulder in the successful completion of the new, exciting projects that will write the next chapter in Qatar’s history."
Leaders from numerous U.S. companies attended the event, but two U.S. companies were head and shoulders above the others because of their early and long-standing involvement in Qatar: ConocoPhillips and ExxonMobil. 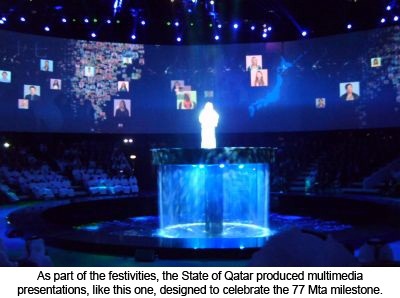 ​James Mulva, Chairman and CEO of ConocoPhillips, said that his company is "pleased and honored to be a partner to Qatar in this important achievement, one of the most significant in the history of the LNG industry worldwide ... Such vision and strategy have maximized Qatar and the world’s benefit from a world class natural resource, the North Field."
Rex W. Tillerson, Chairman and CEO of ExxonMobil Corporation, also attended the event at Ras Laffan. "Qatar’s visionary leadership and the remarkable story of its natural gas development are truly an inspiration," he noted. "We are honored to be part of this major accomplishment ... and we look forward to our continuing partnerships in the State of Qatar."
The LNG facilities at Ras Laffan are divided into 14 trains, seven at Qatargas and seven at RasGas. The first shipments from Qatargas and RasGas took place in 1996 and 1999, respectively. During the celebration at Ras Laffan, the CEO of Qatargas, Sheikh Khalid Bin Khalifa Al Thani, noted, "Since delivering our first LNG cargo 14 years ago, Qatargas has followed a remarkable, well planned course of growth and expansion." In the same spirit, the Managing Director of RasGas, Hamad Rashid Al Mohannadi, described the 77 Mta milestone as a "defining moment in Qatar's history as a gas producing and exporting nation."
Abdulaziz Al Malki, Chairman of the 77 Mta Celebration Higher Committee, echoed the sentiments of many when he said, "In the 1990s, many people thought our vision of Qatar’s capacity to produce 77 Mta of LNG was a dream. But in every business challenge, the first step is a dream; the second step is to make it a reality."
Al Malki concluded, "Ten years from today, we will look at the map of the world and see that Qatar LNG has been delivered to even more corners of the world ... The people of Qatar look forward to making many more of our dreams a reality."
​
HOME | Privacy Policy | My Dashboard | About | Contact | Sitemap
​Due to COVID-19,  and in the interest of public safety, walk-in service at NUSACC is temporarily suspended. Because our clients deserve the best possible service, certification services will continue to be offered by MAIL.