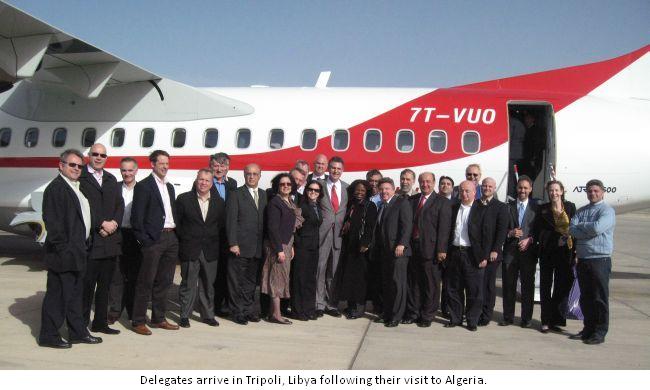 A high-level delegation comprised of 25 U.S. companies wrapped up its trade mission today to Algeria and Libya. The mission was led by the Hon. Nicole Y. Lamb-Hale, U.S. Assistant Secretary of Commerce for Manufacturing and Services, with support from the National U.S.-Arab Chamber of Commerce (NUSACC) and the U.S.-Algerian Business Council. The visit represents the first U.S. Government-led trade mission to Libya since the United States restored diplomatic relations with that nation.
Upon her arrival in the region, Assistant Secretary Lamb-Hale noted, "President Obama in his State of the Union address recently established the goal of doubling U.S. exports in five years to support two million American jobs. A major way that the Commerce Department can meet President Obama's challenge is by identifying new markets worldwide for U.S. companies, which for years have been the spheres of influence of other regions or countries. Algeria and Libya are perfect examples of such markets." 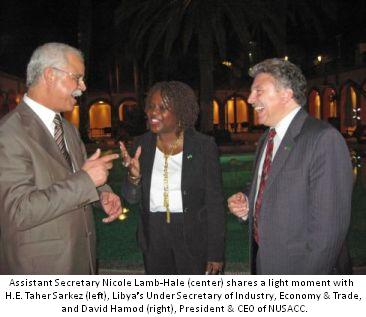 David Hamod, President & CEO of the National U.S.-Arab Chamber of Commerce, described the mission as an "excellent example of how the U.S. Government and the American business community, when they work together, can send a strong message about the value of public/private partnerships. Our government colleagues have helped to 'open a window' to both of these markets. Now it's up to us, the private sector, to take advantage of this window of opportunity."
The American companies – large and small – possess a wide array of technical expertise and experience, and they are well positioned to support Algeria and Libya in their efforts to become knowledge-based societies. Mission delegates represent nine different sectors of the U.S. economy: construction, architectural and engineering, health, education, tourism, infrastructure, medical, telecommunications, and defense.
The delegation marks the first time that the International Trade Administration of the U.S. Department of Commerce has organized an official trade mission to Algeria and Libya.
In his welcoming message, U.S. Ambassador to Libya, the Hon. Gene Cretz, stated that the "presence of this trade mission and its distinguished official delegates shows how important the future of the Libyan economy is to our economic partnership with Libya. A strong U.S. business presence will promote technology transfer, enhance the business enabling environment, and foster the values of transparency and free competition that will promote economic prosperity in Libya." 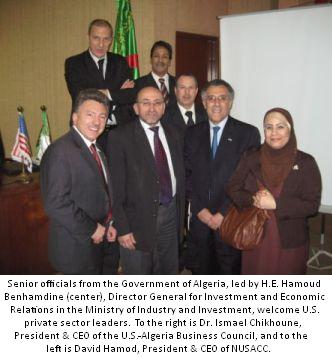 ​In the same spirit, the Hon. David Pearce, U.S. Ambassador to Algeria, noted, "The arrival of the first official U.S. Government-led trade mission to Algeria is a historic milestone in relations between the United States and Algeria. The United States considers Algeria a very important partner, and through this Trade Mission we wish to deepen and diversify our already significant commercial relationship with a key regional ally."
During their visits to Algeria and Libya, business delegates held more than 200 bilateral and multilateral meetings with government officials and business leaders in the two nations. Said one delegate, "These markets hold excellent potential for our products. And since the youth of Algeria and Libya make up more than half of these nations' populations, there is plenty of room to grow."
U.S. companies that participated in the delegation include (in alphabetical order): AAE Systems, Artel, Bechtel International, Boeing, CMF Distribution, Capstone Turbine Corporation, Electrolux International, Hill International, HKS, Inc., Harley Davidson Motor Company, Lessard Group, Morganti Group, Motorola, Northrop Grumman Electronic Systems, Petrotech, Pratt & Whitney Power Systems, Raytheon International, SSC Medical, Sabre Airline Solutions, Severn Trent Services, Ted Jacob Engineering Group, TJJA Architects, Wall Ties & Forms, Universal Dynamics, and YSI, Inc.
Concluded Assistant Secretary Lamb-Hale, "Increasing exports to these countries will not only strengthen our own economy. By strengthening U.S. commercial interactions internationally, the United States can show the world that the way out of the world economic crisis is not isolation, but a recommitment to greater openness to trade. Trade, after all, enhances trust between nations, and the greater competition established by free trade allows each and every country to buy the best goods at the best prices."
HOME | Privacy Policy | My Dashboard | About | Contact | Sitemap
​Due to COVID-19,  and in the interest of public safety, walk-in service at NUSACC is temporarily suspended. Because our clients deserve the best possible service, certification services will continue to be offered by MAIL.