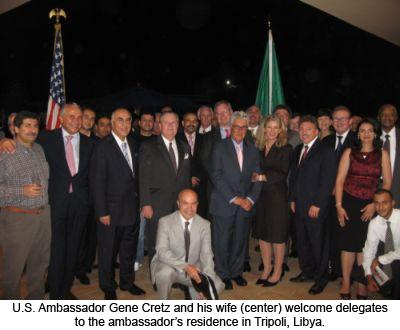 The National U.S.-Arab Chamber of Commerce (NUSACC) has just concluded a high-level trade & investment mission to Libya, Tunisia, and Algeria. Senior executives from companies all over the United States participated in the mission, one that highlighted a wide variety of business opportunities in the three North African nations.
"More than half the population of the Arab world borders the Mediterranean," said David Hamod, President & CEO of NUSACC, "representing some of the most dynamic societies in the Middle East & North Africa (MENA) region. These nations are laying groundwork for projects worth hundreds of billions of dollars, and our chamber is doing its part to ensure that U.S. companies win a slice of that business."
Sectors represented in the delegation included aerospace, banking & finance, logistics, information and communications technology (ICT), power generation, defense & security, and construction & engineering.
Large companies participating in the mission generated revenues in excess of $175 billion last year, but small companies were also well represented in the delegation. Approximately one-third of the delegates were CEOs of small and medium-sized enterprises (SMEs), and one delegate represented the U.S. Small Business Administration (SBA), part of the U.S. Government that works with more than one million U.S. companies each year.
Inga Fisher Williams, an SBA Regional Export Finance Manager based in Portland, Oregon, suggested that the mission is consistent with the U.S. Government’s National Export Initiative, which aims to double U.S. exports over the next five years. "Small U.S. exporters can find profitable niche markets in North African countries if they are willing to tackle the challenges of developing countries," she offered. "Perseverance, patience, and a good local partner are the keys to success. In addition, the recent changes in SBA loans for exporters promise to open up access to working capital for financing many more SME export sales around the world."
The ten-day mission was organized by NUSACC in partnership with the Tripoli Chamber of Commerce & Industry, the Tunisian Union of Industry, Trade and Handicrafts (UTICA), the Tunisian-American Chamber of Commerce (TACC), and the U.S.-Algeria Business Council. "This was one of NUSACC’s most successful missions ever," noted David Hamod of the U.S.-Arab Chamber, "and none of this would have been possible without our private sector partners on the ground. The U.S. Embassies in all three nations also played an instrumental role in the delegation’s success, as did the Governments of Libya, Tunisia, and Algeria." 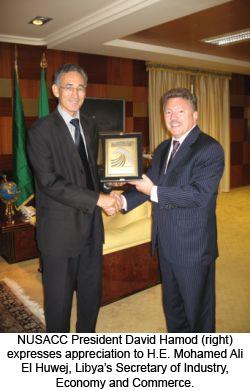 The Great Socialist People’s Libyan Arab Jamahiriya
The United States and Libya restored full diplomatic relations in May 2006, paving the way for increased bilateral cooperation at many different levels, including commercial relations. NUSACC has led three high-level business delegations to Libya in recent years, and with each visit, Libya’s private sector has shown a greater willingness to do business with U.S. companies.
At a U.S. Embassy reception held in honor of the visiting NUSACC delegation, U.S. Ambassador Gene Cretz stated, "Libya plans to invest hundreds of billions of dollars in housing and infrastructure, health, education, and commercial projects over the next five years. We have seen significant progress in our bilateral commercial relationship in recent months, and we hope that trade missions such as this one will further expand that engagement . . . . When carefully prepared and wisely conducted, trade and investment are win/win relationships for both sides and help to reinforce the common interests and goals that bring countries closer together over time."
Delegates met with a number of senior officials in the Government of Libya, including H.E. Mohamed Ali El Huwej, Libya’s Secretary of Industry, Economy and Commerce. The minister talked about the growing importance of Libya’s business community, and he described steps that his nation is taking to simplify its tax codes, diversify away from hydrocarbons, slice through bureaucratic red tape, enact new laws to protect consumers, and provide education and training opportunities for Libya’s youth. 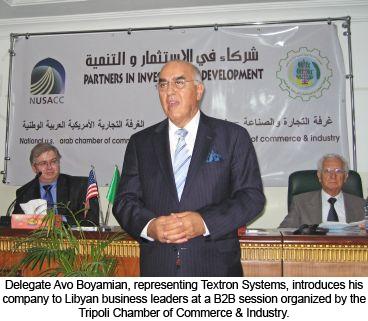 ​The United States and Libya signed a Trade and Investment Framework Agreement (TIFA) in May 2010, an important first step in promoting government-to-government cooperation. The first meeting of the U.S.-Libya TIFA Council is scheduled to take place later this month, and discussions are expected to focus on such topics as market access, intellectual property rights, capacity building, and scientific cooperation.
Delegates participated in two business-to-business (B2B) events that brought them into close contact with their Libyan counterparts. The first was a B2B seminar hosted by the Tripoli Chamber of Commerce & Industry, and the second was a B2B luncheon hosted by the Libyan Business Council.
One of the delegates, Walter Siouffi, General Manager of Citibank Maghreb, concluded, "NUSACC arranged a very good lineup of high-level contacts with Libyan businessmen and government bodies, which expressed a strong desire to see more U.S. companies engaging in business in Libya. A lot of ground was covered in a very short period of time thanks to NUSACC’s excellent contacts in the country." 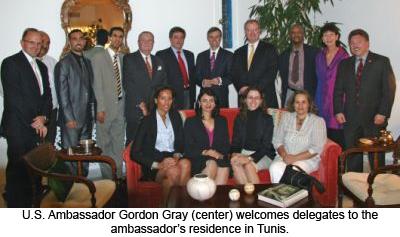 ​The Tunisian Republic
Unlike Libya and Algeria, Tunisia is not endowed with large quantities of oil or natural gas. With that in mind, the country places great emphasis on building capacity in human resources. Tunisia has historically maintained the highest levels of primary education in the Arab world, and its development plans are more focused on providing services than generating heavy industry.
Delegation members met with a variety of senior officials in the Government of Tunisia, including H.E. Mohamed Naceur Ammar, the Minister of Communication Technologies. Prominence in Information and Communications Technology (ICT) plays a very important role in the nation’s development plans, and Tunisia has been moving up the international charts. It now ranks 39th in the World Economic Forum’s Networked Readiness Index, which measures nations’ effectiveness in exploiting ICT opportunities, and it ranks 32nd in the WEF’s Global Competitiveness Report -- up from 40th in 2009, and ahead of such nations as Spain, Italy, and South Africa.
With Tunisia's heavy emphasis on research & development and the nation's plans to be a hub for Europe, Africa and the Middle East, Tunisia's private sector was keen to meet with the delegation. The Tunisian Union of Industry, Trade, and Handicrafts (UTICA) hosted a luncheon for the NUSACC delegates, followed by a B2B session with member companies of the Tunisian-American Chamber of Commerce. TACC also hosted a dinner for the delegates in Sidi Bou Said, the well-known tourist village on the outskirts of the capital city. 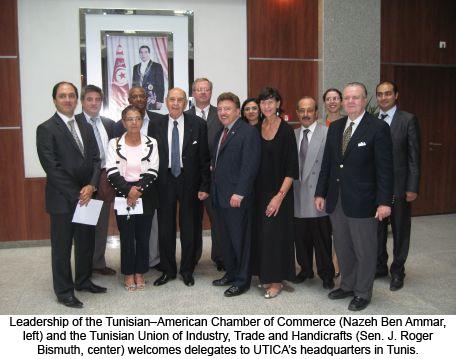 ​For its part, the U.S. Embassy has been working diligently to ensure that Tunisia is on the scope of prospective American investors. The NUSACC delegation was the second major U.S. trade mission to visit Tunis in recent months, and the U.S. Embassy kept delegates busy from sunup to sundown with government and private sector meetings, roundtable discussions, and visits to sites of historical significance. A media roundtable discussion with U.S. Ambassador Gordon Gray, NUSACC and the Tunisian-American Chamber of Commerce, for example, generated more than 20 articles in local media.
Concluded Ambassador Gray, "The U.S. and Tunisia have strong and growing commercial ties. Every day, more American companies inquire about doing business with Tunisia. We look forward, with partners such as the National U.S.-Arab Chamber of Commerce, to fostering even closer business ties between our two countries." 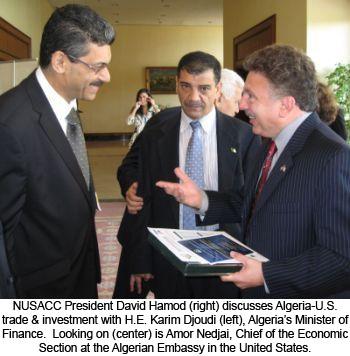 The People’s Democratic Republic of Algeria
As part of its new five-year plan, according to Algerian officials, $287 billion in new funds-coupled with $55 billion in existing funds-will be used for infrastructure development and capacity building that will better position Algeria as a knowledge-based society. Some of this development includes 500 new schools, 72 new hospitals, 47 new health centers, and two million new housing units.
Against this backdrop, the delegation was keen to gain a better understanding of how to tap into Algeria's burgeoning market. In partnership with the U.S.-Algeria Business Council, and with strong support from the Government of Algeria and the U.S. Embassy, delegates were able to meet with decisionmakers in almost a dozen ministries. Some of these included the Ministry of Foreign Affairs, the Ministry of Industry, Investment, and Small & Medium-Sized Enterprises, the Ministry of Health, the Ministry of Energy and Mines, the Ministry of Housing, the Ministry of Information Technology and Communications, Sonatrach, and the National Agency for Development of Investment of Algeria (ANDI).
"Both our countries realize that we have shared interests in security, stability, commerce, and further opening our countries to each other," stated U.S. Ambassador David Pearce in his welcoming remarks. "Today, there are over 80 U.S. companies doing business in Algeria, and most of these newer companies operate outside the hydrocarbon sector, in areas such as food, pharmaceuticals, machinery, construction, security, consumer goods, and information technology."
Ambassador Pearce went on to say that America's trade relationship with Algeria is "our fourth largest in the region, and we are Algeria’s largest trading partner. The strongest sectors in terms of both volume and dollar value are energy, food, machinery, and electronics. Total bilateral trade in 2009 was about $12 billion, and we are on track to exceed that amount in 2010. We are Algeria’s number one customer, and nearly $11 billion of that two-way trade is us buying from Algeria." 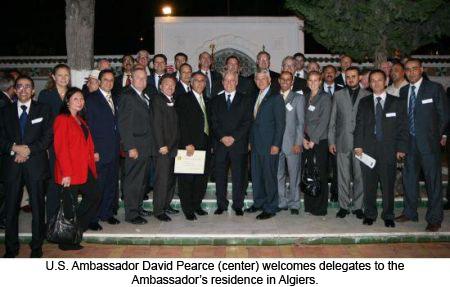 ​In response to growing interest by American firms, the U.S. Embassy in 2008 received a full-time commercial attaché for the first time in 15 years. Later this year, the embassy will be adding an agricultural attaché for the first time in 17 years. The U.S. Department of Commerce led the first-ever official trade mission to Algeria earlier this year, and the U.S. Trade and Development Agency (USTDA) recently concluded its first grant in Algeria in seven years.
One of the ministers who spoke to the delegation was H.E. Karim Djoudi, Minister of Finance. In an interview, he highlighted the fact that Algeria was successful in withstanding the global financial downturn. "The Algerian financial sector was not burdened with a portfolio of toxic assets," he noted. "We were also protected against volatile interest rates on sovereign debt thanks to our decision to pay our external debts ahead of schedule, before the start of the crisis."
***
NUSACC delegates who participated in the North Africa trade and investment mission described it as "highly productive" and "very promising, with many leads generated during our meetings."
Bill Lott, owner of Triple L - a management and construction firm based in Shreveport, Louisiana - said, "I am very happy that I got invited to be one of the delegates ... our firm had previously participated in trade missions to Angola and Cameroon, and this event was miles ahead of them. In my opinion, the event was well planned, professionally structured, and superbly executed. Also, I found the individuals who worked for the U.S. Government to be totally transformed and much improved from what I could remember dating back many years."
John Reynolds, President of International Transportation Management, a Philadelphia-based global logistics firm, put it this way: "The National U.S.-Arab Chamber of Commerce trade mission has been a fantastic success. In the brief span of ten days, I have learned about the distinct differences of the three countries and the outstanding trade opportunities that exist within their borders. I especially enjoyed meeting the people of Libya, Tunisia, and Algeria, and I hope that they will also visit me in the United States."
HOME | Privacy Policy | My Dashboard | About | Contact | Sitemap
​Due to COVID-19,  and in the interest of public safety, walk-in service at NUSACC is temporarily suspended. Because our clients deserve the best possible service, certification services will continue to be offered by MAIL.