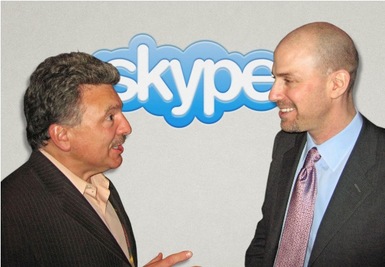 The National U.S.-Arab Chamber of Commerce wrapped up its 2010 High Tech Road Show this week with a visit to Silicon Valley, California. Delegates from throughout the Arab world met with leading U.S. information technology (IT) companies with a view to promoting cutting-edge technology transfer and building capacity in IT human resources in the Arab world. Silicon Valley was the second and final stop on the Road Show, following three days at the International Consumer Electronics Show (CES) in Las Vegas.
"More than 35 Arab companies signed up to participate in this year's High Tech Road Show, the only one of its kind in the world," said David Hamod, President & CEO of the U.S.-Arab Chamber. "Interest is growing from year to year, and this year's delegation was the most enthusiastic we've ever had. From our perspective, this tour was a major success."
Delegates participating in Silicon Valley and the International CES came from 14 Arab nations: Bahrain, Egypt, Iraq, Jordan, Kuwait, Lebanon, Libya, Oman, Palestine, Qatar, Saudi Arabia, Syria, Tunisia, and the United Arab Emirates. 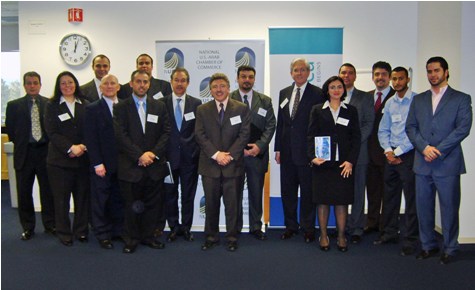 ​"The Road Show was an eye-opener for different technologies that have been adopted by U.S. corporations and the U.S. Government, providing insights into how we might develop this industry in the Arab world," noted Dr. Mohamed Omran, a member of the Ministerial Counselor Board affiliated with Egypt's Ministry of Communications and Information Technology.
The visit was "very beneficial, introducing us to new technologies and products," said Bassam Yaslam Al-Yahri, representing the Qatar Olympic Committee. "It provided an excellent venue for networking and will enable us to achieve our objectives."
The Road Show was an "amazing opportunity to meet some of the IT world's leading lights," noted Hesham Husni Bey, representing Trans Sahara Group in Libya. "The meeting with Intel's Chief Strategist was mind-blowing, and then we met the CTO of Tessera, an American of Algerian descent. He is an inspiration to the Arab world, and I leave the Road Show with great hope for the MENA region."
Meetings during the High Tech Road Show provided an opportunity to showcase some of the U.S.-Arab Chamber's top member companies. In Silicon Valley, high-level sessions were held with such entities as Boeing, Cisco, Intel, and Stanford University, and a roundtable meeting was held with members of TechAmerica - the leading voice for the U.S. technology industry, with 1,500 member companies.
These sessions followed on the heels of high-level meetings at the International CES with such companies as Hewlett-Packard, IBM, Microsoft, Motorola, Polaroid, Qualcomm, and Verizon. The visit to Las Vegas was organized by the U.S.-Arab Chamber in cooperation with the Consumer Electronics Association, America's voice of consumer electronics with more than 2,000 member companies.
Plans are already underway for the U.S.-Arab Chamber's 2011 High Tech Road Show. One delegate who plans to return next year, Samir Ben Taieb, Managing Director of SamsTech in Tunisia, said the Road Show "encourages knowledge transfer from U.S. high tech companies that are well positioned to help us succeed in our respective countries. Building on the strength of this year, we are looking forward to participating in next year's Road Show, which promises to be even bigger and better."
HOME | Privacy Policy | My Dashboard | About | Contact | Sitemap
​Due to COVID-19,  and in the interest of public safety, walk-in service at NUSACC is temporarily suspended. Because our clients deserve the best possible service, certification services will continue to be offered by MAIL.