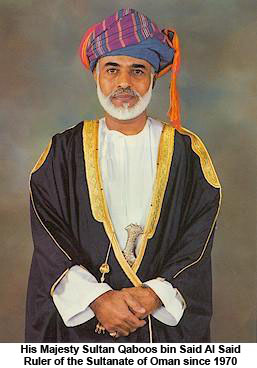 The Sultanate of Oman has just kicked off a host of activities celebrating four decades of leadership by H.M. Qaboos bin Said Al Said, who has served as Sultan since 1970. The week-long celebrations include a National Day Festival, a VIP tea party, a musical military tattoo, a Student Festival, and a wide variety of cultural and folkloric events. The National U.S.-Arab Chamber of Commerce (NUSACC) is represented at the celebration by its President & CEO, David Hamod, who is part of a small delegation of American leaders in Muscat this week.
"Our chamber is extremely proud to be invited to this once-in-a-lifetime gathering," said Hamod, who has been visiting Oman for more than two decades. "Forty years at the helm is a remarkable milestone, and it is very impressive to witness first-hand the pride and reverence that the Omani people have for their leader."
Muscat is hosting thousands of dignitaries this week, including H.M. Queen Elizabeth of England and H.M. King Abdullah II of Jordan, who joined H.M. Sultan Qaboos yesterday on the reviewing stand at the kickoff event, a National Day Festival supported by 15,997 Omanis. Marching bands, dance troupes, and military processions from all over the country filed into a stadium outfitted for the 40-year celebrations. A cast of thousands paid their respects to Sultan Qaboos in a show of pageantry on a grand scale. 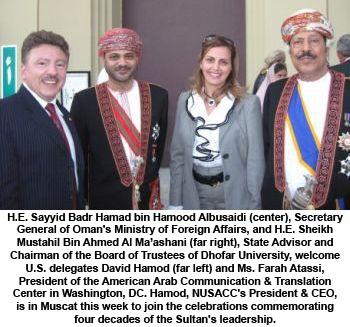 ​"No stadium can contain the pride that we Omanis share for our Sultan, the leader of our national renaissance," noted one Omani participant. The Oman Tribune newspaper put it this way: "The reforms [that H.M. Sultan Qaboos] initiated 40 years ago and the vision with which he is leading the Sultanate on a progressive and modern path - without forgoing age-old traditions and family values - is a matter of pride for all of us."
Historical Snapshot
Oman's historic roots extend back thousands of years. Throughout much of recorded history, Oman was a thriving trade center straddling East and West, and the city of Sohar was widely regarded as one of the greatest seaports in the Islamic world. Oman's strategic position allowed it to control commerce into and out of the Gulf, including the sea route that rounded Africa to India.
But by the mid 20th Century, Oman was largely cut off from the modern world. Potable water and electricity were very scarce, quality medical care did not exist, and generations of Omani children were growing up illiterate. Oman, once seen as a crossroads to the world, had largely become a backwater.
When Sultan Qaboos succeeded his father in 1970, he implemented a series of wide-ranging reforms that brought Oman back into the international community. 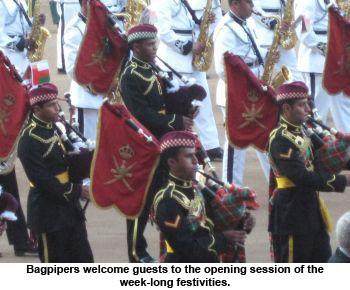 ​Perhaps the most important of these reforms has been in the field of education. In 1970, there were only three rudimentary schools in the entire country, with a total of 909 pupils and not more than thirty teachers. There are now over 1,000 schools in Oman, according to the Government of Oman, which runs 90 percent of the nation's schools. Today, the total number of students receiving their education in government-run schools is around 560,000, and approximately half of these students are female.
Sultan Qaboos has encouraged women to play a leading role in the development of Oman on the grounds that to "exclude women is to exclude 50 percent of the country's potential." In large part as a result of the Sultan's encouragement, there are more female graduates these days than male graduates.

​Communications has also changed dramatically over the years. Oman today has one of the most sophisticated information and communications technology (ICT) backbones in the region. In 1970, data moved around the country by foot or by road at a time when Oman had only six miles of paved roads. Today, Oman boasts more than 20,000 miles of roads and a national airline (Oman Air) that is fast becoming one of the best in the region. Oman has no trains – yet – but the Sultanate will be a primary beneficiary when the Gulf Cooperation Council (GCC) nations build railways in coming years that will link the Arabian Gulf countries. 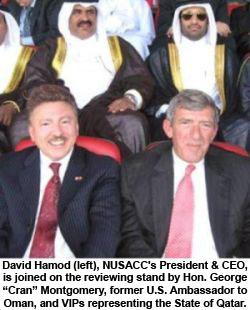 Oman-U.S. Relations
In the Eighteenth Century, the fledgling United States of America saw great value in establishing commercial relations with Oman, a "regional superpower." In September 1790, the first ship from the New World to visit Oman, the Rambler, dropped anchor in Muscat. It was not long before the U.S. and Oman signed a Treaty of Commerce and Amity - the first bilateral accord between America and an Arab Gulf nation. And in April 1840, the Omani trading ship "Sultana" was the first Arab vessel to sail into a U.S. port (New York).
From these humble roots, the Oman-U.S. commercial relationship has blossomed into one characterized by continuity and gradual growth over time. Oman is America's eleventh largest market in the Arab world for merchandise and service exports, totaling roughly $2 billion in 2009. By 2013, according to recent research conducted by the National U.S.-Arab Chamber of Commerce, U.S. exports to Oman are expected to rise to over $3 billion per year. Last year, the top five exporting states to Oman were Texas, Washington, Maryland, New Jersey, and California.
The centerpiece of the growing Oman-U.S. commercial relationship is a Free Trade Agreement (FTA) that was signed in 2006 and went into effect last year. The agreement removes trade barriers by reducing tariffs to zero over time, thereby paving the way for greater access to both markets. 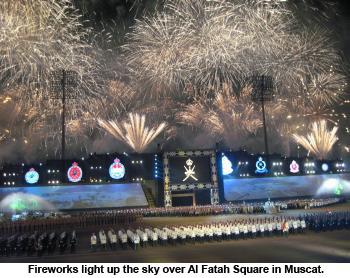 The FTA has the potential to significantly increase trade in both directions, particularly for small and medium-sized companies that focus on niche markets. Earlier this year, the U.S. State Department gave the FTA a boost in this direction when the Middle East Partnership Initiative signed a Memorandum of Understanding with Oman to promote the productivity of small and medium-sized enterprises in the Sultanate in conjunction with U.S. Small Business Administration.
The FTA targets trade, but it also appears to be encouraging greater U.S. investment, directly and indirectly, in Oman. In 2008, the most recent year for which data are available, U.S. foreign direct investment in the Sultanate rose to $339 million, up from $241 million the previous year. This makes the United States the second largest investor in Oman, following the United Kingdom.
Oman-U.S. ties have always been based on more than just commerce, with a heavy emphasis on cultural and strategic relations. Oman is an important ally for the United States in regional issues from Africa, through the Arabian Gulf, and well into Asia. The two nations share a long history of promoting and defending regional stability. Oman was a founding member of the Gulf Cooperation Council in 1981 and the first country in the Gulf to negotiate a security cooperation agreement with the United States. In the most recent instance of Oman-U.S. strategic cooperation, the Sultanate played a vital role in gaining the release in September 2010 of Sarah Shourd, the young American woman who was detained in Iran for over a year. 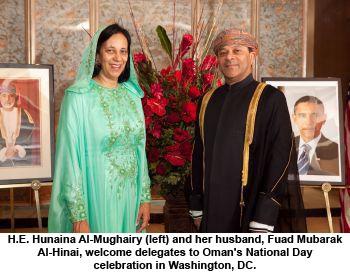 ​Oman and the United States also work closely to share knowledge, provide training, and generate employment that benefits both countries. Through a Memorandum of Understanding on Environmental Cooperation, the U.S. and Oman are pioneering new and more cooperative ways to safeguard natural spaces and endangered species. In terms of building capacity for Omanis, higher education, information technology, and tourism are key areas in which the U.S. seeks to provide valuable expertise and training with a view to broadening and deepening the economic relationship even further.
"Oman and the United States have always had common interests," says Her Excellency Hunaina Al-Mughairy, Oman's Ambassador to the USA. "Oman was the first country to sign a treaty of amity and commerce with the United States, in 1833. Today, the two countries share common interests and objectives in the Arabian Gulf area, including peace, regional stability, security and economic development. The relationship between our two nations stands as a model of how free people, determined to maintain their territorial integrity and political independence, can and do cooperate for their mutual interest.
HOME | Privacy Policy | My Dashboard | About | Contact | Sitemap
​Due to COVID-19,  and in the interest of public safety, walk-in service at NUSACC is temporarily suspended. Because our clients deserve the best possible service, certification services will continue to be offered by MAIL.