ALLWORLD NETWORK LAUNCHES ARABIA FAST GROWTH 500
At Harvard University Gathering, U.S.-Arab Chamber Helps to Host Entrepreneurs from the Arab World
Professor Michael E. Porter Tells Entrepreneurs, “You Can be a Force for Change. Together, We Can Change the World.” 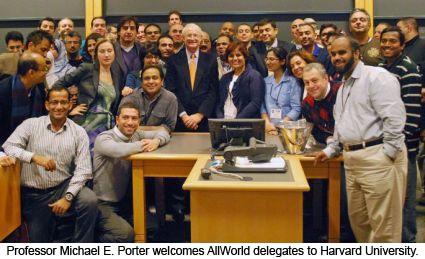 At the AllWorld Summit concluding at Harvard University today, the National U.S.-Arab Chamber of Commerce (NUSACC) helped to launch the "Arabia Fast Growth 500," a new initiative to identify and support the 500 fastest growing companies in the Middle East and North Africa (MENA) region.
"Governments all over the globe are realizing that they need strong private sector partners to get their economies back on track and to help generate productive jobs," said David Hamod, President & CEO of NUSACC. "The Arabia Fast Growth 500 list - produced by our partner, AllWorld Network - serves as a road map to the region's hottest young companies."
"We can't have success in the world without successful companies because only companies can create wealth and prosperity," noted Harvard Professor Michael E. Porter, a founder of the AllWorld Network. "Creating businesses that can grow and have an impact is at the heart of development."
The AllWorld Network and its partners, including the National U.S.-Arab Chamber of Commerce, hosted a high-level delegation of Arab entrepreneurs this week at Harvard University. There were more than 75 delegates in all, including recent winners of the Saudi Fast Growth 100 and the Lebanon Fast Growth 25. These companies are responsible for generating or sustaining 7,000 jobs in the Arab world, posting an average of 285 percent growth in the past three years.
During the five-day gathering at Harvard University, the AllWorld Network launched The Arabia Fast Growth 500, which is the first definitive record of the fastest growing, most dynamic entrepreneurs in the region. By shining a light on these emerging business leaders, the AllWorld Network intends to improve access to capital and markets for entrepreneurs, provide real time feedback to policymakers, point the way forward for large scale job creation, and put momentum behind these entrepreneurs as they create the next economy for their countries and regions.
"We intend to be nothing less than a force for economic change globally," said Anne Habiby, a co-founder of the AllWorld Network. "Working with our growth collaborators throughout the world, we plan to move markets in real time, thereby generating new wealth and expanding development. At the end of the day, we hope that The Arabia Fast Growth 500 will change the way the world sees and invests in the Middle East and North Africa." 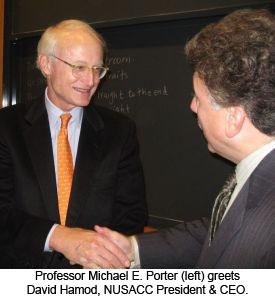 ​The winner of this year's Saudi Fast Growth 100 Start-Ups, Ms. Enas Hashani of the Rumman Company, a media publishing house, has grown her company to more than 21 employees in less than three years. "In the past few years, Jeddah has opened tremendously to business investment and tourism," she pointed out. "We wanted to educate people, including locals, about what Jeddah has to offer."
Looking forward, AllWorld is in the process of expanding into Algeria, Egypt, Jordan, Morocco, Tunisia, and the United Arab Emirates. "We are grateful for our partnership with NUSACC," stated Deirdre Coyle, co-founder of the AllWorld Network. "It is an important part of our expansion strategy. NUSACC's invaluable network will help us move quickly and find the most exciting companies in the region."
Professor Porter highlighted the growing role of social entrepreneurs and importance of doing good while doing well. "The next big transformation will be the integration of business and society," he noted. "In this context, companies will be more sensitive to impacts on health, resources, the environment, and meeting basic human needs. CEOs will need to ask, 'What is the social purpose of my company, and how am I creating value for society?'"
In his concluding remarks to the delegates, Porter dissuaded these start-up companies from becoming 'copycats' and following the crowd. He urged them to celebrate their uniqueness and to continue developing niche markets that will improve society as a whole. "You can be a force for change," he suggested. "Together, we can change the world."
HOME | Privacy Policy | My Dashboard | About | Contact | Sitemap
Copyright © 2022, National U.S.-Arab Chamber of Commerce. All Rights Reserved