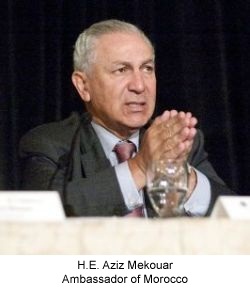 The National U.S.-Arab Chamber of Commerce (NUSACC) and World Boston today co-hosted the first-of-its-kind Arab Ambassadors Forum in Boston, Massachusetts. More than 200 business leaders from around the region signed up to attend the event, which featured Bahrain's Ambassador to the United States, H.E. Houda Ezra Nonoo, Iraq's Ambassador to the United States, H.E. Samir Sumaida'ie, and Morocco's Ambassador to the United States, H.E. Aziz Mekouar.
The Forum was sponsored by Northrop Grumman and Raytheon, and it was supported by Harvard University, the Massachusetts Institute of Technology, and Tufts University. The unique gathering at the Fairmont Copley Plaza Hotel took place on the sidelines of the National Governors Association annual meeting, to which NUSACC led a high-level delegation of Arab ambassadors.
Following welcome remarks by Bill Clifford, President and CEO of World Boston (worldboston.org), a keynote speech was delivered by David Hamod, President and CEO of the U.S.-Arab Chamber. He noted that the Arab world consists of 22 countries with approximately three hundred million people, roughly the size of the United States. "The Middle East and North Africa (MENA) region is literally the crossroads of the international marketplace," said Hamod. "With trade flows of $800 billion dollars expected this year to the United States, Europe, Africa and Asia," he noted, "the Arab world will play a key role in helping to lead the global economy out of the doldrums." 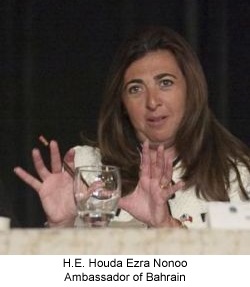 ​During the period 2007 to 2010, U.S. exports to the region are slated to increase by some 50 percent, from $50 billion to almost $75 billion, commented Hamod, referencing the Chamber's recently published U.S.-Arab Trade Outlook: 2010. "When it comes to U.S. exports to the Arab world, we are on track to break all records this year."
"With 20 percent growth over last year," suggested NUSACC's President, "exports to the Arab world should help our economy rebound here in America. These exports of goods and services translate into approximately 750,000 U.S. jobs. At a time when President Barack Obama has launched the National Export Initiative to double the number of exports and create two million new U.S.-based jobs by 2015, our reading is that the Arab world could play a significant role in generating new American jobs through U.S. exports."
"The MENA region is one of the most attractive markets in the world," Hamod said. "Seventeen of the Arab states implemented economic reforms last year, according to the World Bank, and many of these have now established one-stop-shops to promote investment and cut through bureaucratic red tape."
Concluding his introductory remarks, Hamod asserted that "all things being equal, I believe that the United States continues to be the number one destination for the Arab world. After 9/11, we went through a very difficult phase with our colleagues in the Arab world. But the good news is that after almost ten years, things have really begun to pick up. I think we are making up for lost time."

​In his remarks, H.E. Aziz Mekouar, Morocco's Ambassador to the United States, reminded participants that Morocco was the first country to recognize the United States (in 1777) and the first to sign a trade agreement with America (in 1786). The relationship between the two countries is long and historic, he emphasized.
According to Ambassador Mekouar, Morocco moved into the international trade arena when it joined the GATT (General Agreement on Trade and Tariffs) and initiated Free Trade Agreements (FTAs) with Europe, the United States and four Arab countries. "Basically, we can sell anything we produce in Morocco, duty free, to more than one billion people. That's a huge market."
During the past ten years, Morocco's "Emergence Plan" identified seven primary export-driven sectors: offshoring, automotive and aerospace industry, electronics, textiles, agro-industry, handicrafts and tourism, and the transformation of sea products. "Morocco has worked hard to develop a business-friendly environment," explained Ambassador Mekouar, who noted that the country's location, its FTA agreements, and major infrastructure investments have attracted growing foreign investment.
H.E. Ambassador Houda Nonoo, Bahrain's Ambassador to the United States, noted that her country signed a Free Trade Agreement with Washington in 2004, thereby underscoring the more than 120 year-old relationship between the two countries. She pointed out that today, Bahrain is ranked first among Arab states for economic freedom, it has the most transparent business registration in the region, and it boasts the lowest taxes among the Gulf Cooperation Council (GCC) nations. Between 2006 and 2009, she said, Bahrain's bilateral trade with the United States increased 24 percent, with particular growth in such fields as civilian aircraft, machinery, vehicles and electronics.
Skype, the online phone service, recently moved its Middle East headquarters to Bahrain, describing that Kingdom as "the most energetic environment to encourage innovation." According to Ambassador Nonoo, Kraft Foods referred to Bahrain as the easiest and most straightforward place to establish a business. Other U.S. companies, such as Occidental Petroleum and the accounting firm of Ernst & Young, have also relocated their regional offices to Manama.
"Bahrain is an important gateway to other markets in the region, with easy access to Saudi Arabia and other Gulf states," commented Ambassador Nonoo. Highlighting a Memorandum of Understanding (MOU) that Bahrain recently signed with the Massachusetts Office of International Trade, the Ambassador concluded, "Bahrain has been and always will be open for business." 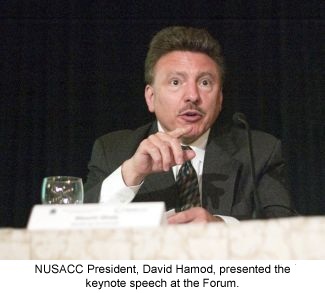 ​The final panelist, H.E. Samir Sumaida'ie, Iraq's Ambassador to the United States, quipped that "Iraq has been the new Wild West, but it is getting less wild every day." He highlighted Iraq's desire to reach out to U.S. companies - from coast-to-coast - in the United States. "It is very important to leave Washington from time to time and to speak to Americans everywhere about the many different business opportunities available in our region," he said.
"Those who have gone to Iraq for business have found it easier than expected," he noted. He urged U.S. companies not to stand on the sidelines while Europeans, Asians, and other competitors of the United States aggressively lock in Iraq's major development projects. "I am concerned that American companies are lagging behind," he said.
Ambassador Sumaida'ie indicated that Iraq is making considerable progress in liberalizing and strengthening its economy. The government is doubling oil production, he said, and exploring "huge potential" in tourism opportunities. Moreover, Iraq has recently established one-stop-shops to expedite registration for foreign companies looking to do business in Iraq.
In his concluding remarks, Ambassador Sumaida'ie highlighted the importance of working closely with reputable Iraqis, not strangers purporting to have "connections" in Iraq. "For the right person with the right approach," he counseled, "opportunities are waiting."
HOME | Privacy Policy | My Dashboard | About | Contact | Sitemap
Copyright © 2022, National U.S.-Arab Chamber of Commerce. All Rights Reserved